When Henna first sat across from Andrew at dinner, she was expecting to knock out all the pre-production details of her upcoming college cooking show. Henna’s eye’s were glued to the menu; there were so many dishes that she wanted to recreate.

While Henna got excited over the menu selection, Andrew just couldn’t help but get inspired by her enthusiam. Andrew was also a student interested in film production. When Henna asked for his help, there was no way he could say no.

“When I had this idea for a college cooking show, I knew I needed help on the production side. I knew Andy was great with filming and directing, so I sent him an email asking if would help bring my idea to life. He was immediately on board. I asked Andy to get dinner with me to go over details and to scout the restaurant as a potential shooting spot. I asked Andy to meet me there. The dinner went so incredibly well. It truly didn’t feel like a business meeting.”

The food was delicious, the conversation flowed flawlessly, and their connection was instant. About halfway through the dinner, Andrew made the executive decision that this was no longer a business meeting; it was now a date. He was falling for Henna, and falling fast.

“Henna was so wonderful to be around. Her personality was magnetic, and her excitement was contagious. She was smart, beautiful, and was determined to make her dreams a reality… I knew she was something special within the first five minutes of sitting down with her. I knew I wanted to work with her, but I also knew that I wanted to date her. I couldn’t let my dream girl just walk away.” 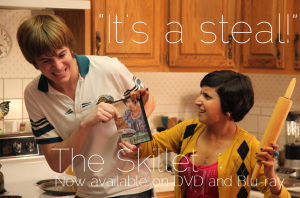 The two business partners started dating shortly after and haven’t stopped since. Their hit college TV show, “The Skillet,” gained them instant stardom on campus and brought them closer than ever.

Henna explained how their connection with food was more than just their first TV show; it was and still is, the foundation of their relationship.

“Growing up in New Delhi, America was an entirely new experience, and as funny as it sounds, food really helped me embrace the America culture. I have found that no matter who you are or where you’re from, food can bring people together. So the fact the Andy and I have such a strong connection to food is huge. Food hasn’t just brought us together, it also brought Andy closer to my family and my culture. I am very close to my family, and we are all very tightly knit in my Indian culture.  Food helped me introduce Andy to what was important to me, and he immediately became invested.”

It only took Andrew six months to realize that he was head over heels in love with Henna. As the years passed, the couple grew closer and more invested in one another. They were best friends, business partners, and the couple that brings out envy in others.

When they were ready to take their relationship to the next level, they knew they wanted both of their families to be appropriately represented in their celebration of marriage. Andy explained that he was thrilled to not just have a traditional Catholic wedding ceremony, but to have an Indian wedding celebration as well.

“The pictures are beautiful, but our wedding day was even more incredible. We truly got to represent both of our families with the two ceremonies. One of my favorite parts of the day was my entrance. So traditionally, the man would ride up on a horse. Well, it started to get a little complicated when you start incorporating a horse, so we made a few changes. We ended up renting a really cool white Mustang convertible, and I showed up blasting Bollywood music. Get it? It worked just fine.” 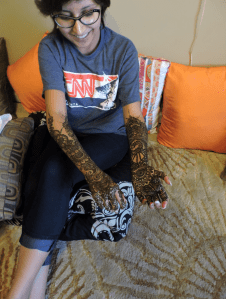 As the couple entered their married life, they found it harder and harder to spend time together. Andy works normal work hours in video production, while Henna finds herself working odd hours as a journalist with CNN. The time they spend together is special and something they have learned to cherish.

In their journey to balance their work lives and their social lives, they found themselves on rooftops time and time again. This elevation addicted couple started to document their rooftop adventures, and that’s how their very popular Instagram page came to be. 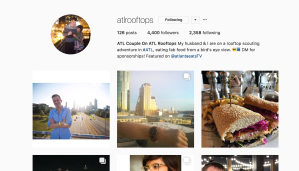 “When Andy and I started this, we never thought it would take off the way it has. It started as something special for just the two of us, and now we are inspiring thousands of people to get up and get out. When we’re on Atlanta rooftops, we’re spending time together and also enjoying wonderful food. It’s another beautiful thing that we get to do together. The things that initially brought us together continue to bring us together.”