When the cancer reached her brain, the doctors gave up hope — until a miracle occurred 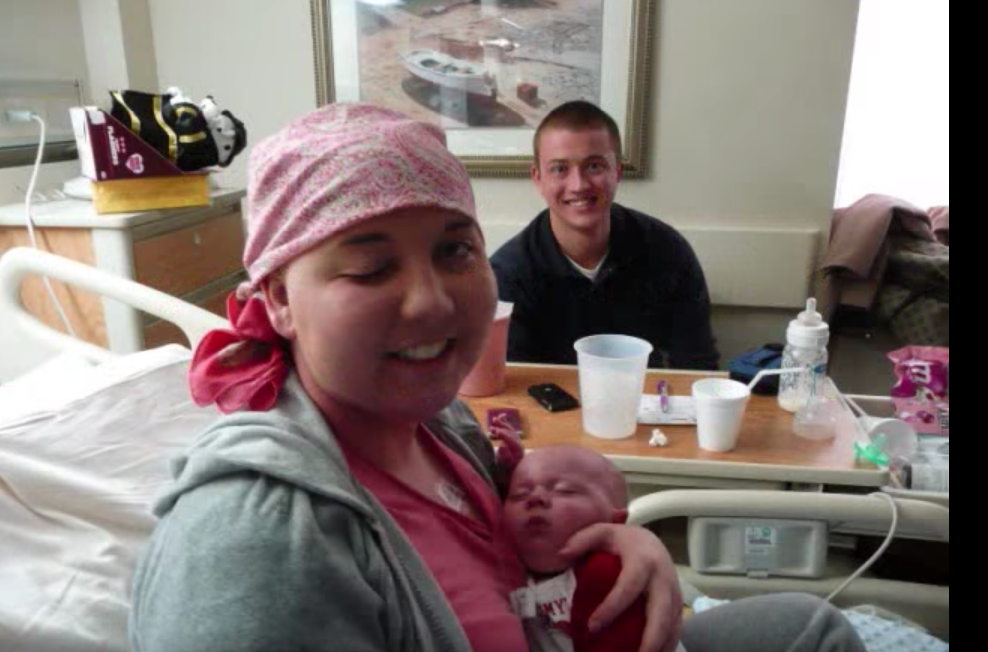 David’s crush on Ashley began in elementary school, but their love story didn’t start until they crossed paths in college. Since Ashley had always been on his radar, David quickly fell for her. To his surprise, Ashley fell even harder — and faster! Ashley explained that she knew very early on that David was the man she would spend the rest of her life with, even if it took David a little longer to get there.

The couple got engaged, and married shortly after that. Their had their new life together in front of them, and they were ready to take on this new journey. That journey took a small (infant-sized) detour when Ashley found out she was pregnant. The couple was surprised, but thrilled. They knew they wanted a big family, and they were so blessed to be expecting a child.

Throughout Ashley’s pregnancy, she dealt with a small knot that appeared on the side of her neck. She didn’t think much of it, but chose to be safe and have a doctor check it out. Ashley’s doctor put her on antibiotics, and the growth disappeared. It wasn’t until the growth grew back and didn’t respond to antibiotics that Ashley and the doctors started to worry.

“It was eight months into my pregnancy when the growth wouldn’t go away. It was growing larger and larger, and we ended up doing a biopsy. They found out it was a very aggressive, unidentifiable cancer. As soon as we found out it was cancer, I was scheduled to have my baby. They needed to get him out so I could have the tumor removed. It all happened so fast, but by the grace of God, Harley was delivered. He was tiny, but he was healthy.”

Shortly after the little boy was born, Ashley went into surgery to have the tumor removed. The procedure was complicated, but doctors were confident that they had removed all of the tumor. Things started to look up for this couple until Ashley experienced double vision.

“Harley ended up getting RSV [respiratory syncytial virus], and he was very sick. I was in the hospital with him when I realized that my vision was doubling and my head started to hurt. I knew something was wrong, so I scheduled an appointment to make sure everything was OK. Well, it wasn’t OK. The MRI had determined that I had a tumor in my brain. After we realized that the cancer was in my brain, I was sent to get a full body scan. That scan showed that the cancer had spread to my liver and my lungs. Following that heart-wrenching news, I started radiation and chemotherapy.”

Ashley, David, and their friends, family and church prayed for a miracle. They knew the cancer was aggressive, and they hoped with everything in them that the chemo would be the solution to Ashley’s illness.

“I was doing chemo five days a week for six weeks straight. It was brutal. My hair quickly fell out, so David shaved my head. I hoped that all the pain I was in was worth it. I just wanted to live. I wasn’t ready to die.”

When Ashley went in for her six-week follow-up, they received the worst news possible. The cancer was spreading, and the tumors were larger than before. There were only two options left for Ashley. She could try another mixture of chemo, or she could go be at home with her son. Ashley’s immediately knew what choice she’d make.

“My baby was so tiny. He needed his mom. There was no way that I was going to go down without a fight. If I was going to die, my baby would know that I fought until the very end. So we started the new treatment and hoped for the best.” Ashley’s friends, family and church got word of the shocking news. In the month that followed, church members fasted and prayed, knowing that Ashley’s fate was in God’s hands. When Ashley went in for her final check-up, they received news that she never though she would ever hear.

“When the doctor came in, she told me that my scan showed no sign of illness. I was in remission. I was cancer free. I cried, David cried, my doctor cried. I had beat death by the grace of God. I was going to live to see my little boy grow up.”

Ten years later, Ashley is still in remission. Her miracles didn’t stop with being cancer free; she also was able to overcome infertility.  She discusses this in her new book, which will be released soon through her website, AshleyHallford.com.

David explained that although this journey changed their lives forever, it created a bond that they will have for the rest of their lives.

“This journey has made me love Ashley even more that I thought I could. She’s the coolest, strongest person I have ever known. She’s my best friend, and I couldn’t imagine doing life with anyone else. I could never have this bond with anyone else. We have learned to cherish life and not sweat the small stuff. If it won’t matter next week, it’s not worth arguing over.”