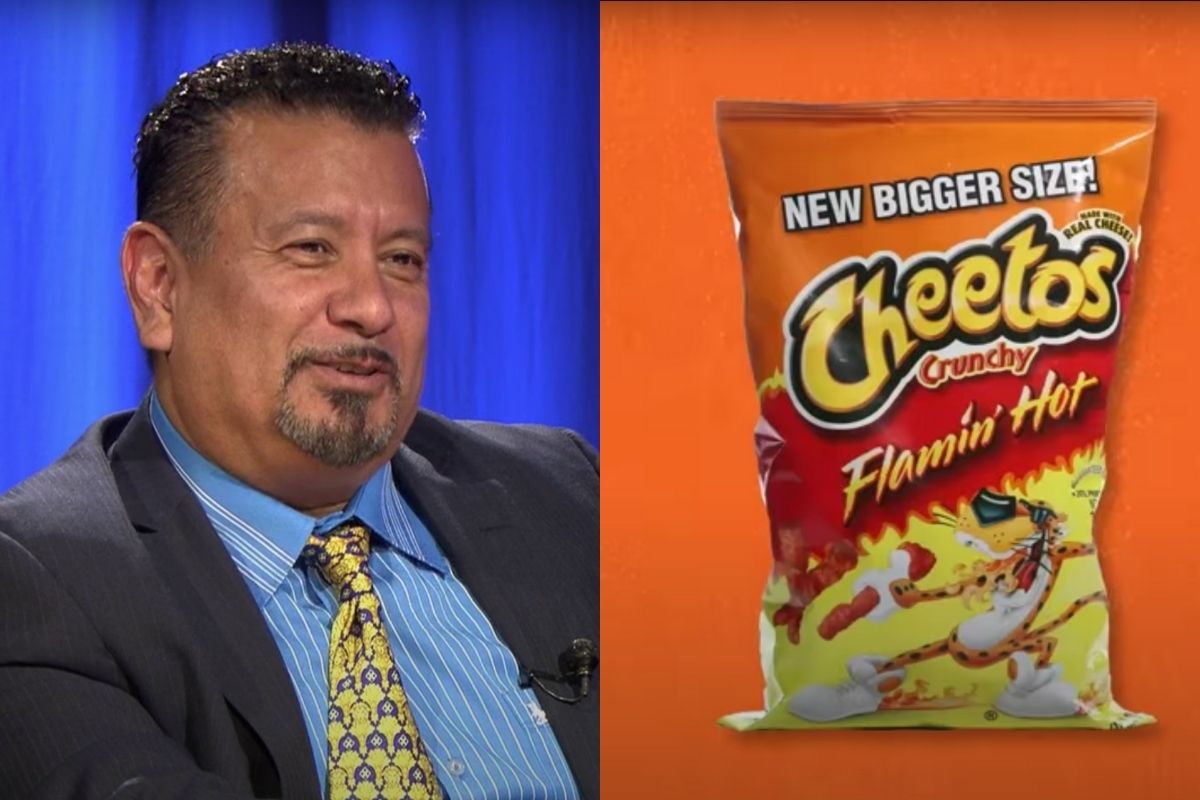 You may have heard this awesome urban legend: that a seemingly ordinary janitor at the Cheetos company came up with the classic red, spicy Flamin’ Hot flavor… and went on to become a multi-millionaire. It’s a rags-to-riches success story that just about anyone can get behind, because after all, who doesn’t love Flamin’ Hot Cheetos? But now Frito-Lay is pushing back against that narrative, long popularized the custodian-turned-PR-master himself: Richard Montañez.

From Janitor to Snack Food Mastermind

Richard Montañez grew up in poverty, living in a Southern California migrant labor camp within a family of ten siblings. After dropping out of high school, he was hired soon after in 1976 as a janitor at Frito-Lay’s factory in Rancho Cucamonga, California. (For just $4 an hour!) And the rest is history… or mere legend, depending on who you ask.

More than a decade after starting work at the Frito-Lay plant, an assembly line machine broke and produced a batch of plain, un-dusted Cheetos. Montañez took some home and dressed them chili powder, inspired by the grilled Mexican street corn sold by local Hispanic vendors.

Loving the combination, Montañez pitched his idea to the former Frito-Lay exec Al Carey and the then-PepsiCo CEO Roger Enrico. (Pepsi is the parent company of Frito-Lay.) Unexpectedly, he was invited to make a larger presentation to the board, which Montañez says he prepared for using resources from the public library. His unique angle was to market the product to the increasingly large Latino market.

A soft launch of Flamin’ Hot Cheetos was organized with prototype versions of the chip and within six months, they were officially approved for national release. According to Newsweek, the original spicy snack product “rejuvenated the brand” and earned billions.

Montañez went on to further profit from his identity as the apparent inventor of Flamin’ Hots. He was appointed the vice president of multicultural sales & community promotions for PepsiCo and is publishing a book on his experience, Flamin’ Hot: The Incredible True Story of One Man’s Rise from Janitor to Top Executive. He also works as a motivational speaker and is the subject of an upcoming biopic, Flamin’ Hot, to be directed by Eva Longoria and released by Searchlight Pictures.

So Is It True?

The Eva Longoria project has brought an unprecedented amount of attention to Montañez’s story. And for the first time, it seems that facts might not match up with the wondrous, entrepreneurial narrative we were sold.

A recent Los Angeles Times article casts more than a shadow of doubt over Montañez’s claims, referring to past Frito-Lay employment records. After complying with the journalists and conducting an internal investigation, the company put forth this statement:

Instead, the Times asserts that a junior employee named Lynne Greenfeld in charge of creating the new brand. Working at Frito-Lay’s Texas office, she was assigned to work on Flamin’ Hots, apparently, in 1989: roughly around the same time Montañez would have been cooking up the idea

After that bombshell L.A. Times piece, Montañez hitting back at Frito-Lay. Speaking to Variety, he said: “I was their greatest ambassador. But I will say this, you’re going to love your company more than they will ever love you, keep that in perspective.”

As for Montañez’s early meetings with top company officials, Al Carey maintains that Montañez was involved with the Flamin’ Hot line. However, records show that CEO Roger Enrico was not technically a part of the company until six months after the hot chip had already hit the test market.

As of now, however, the Flamin’ Hot film is still underway. Though the battle for credit has gotten messier, certainly the story of an inventive janitor is as fascinating as ever. And should it turn out that the story was entirely made up, well, I guess that’s just good marketing.