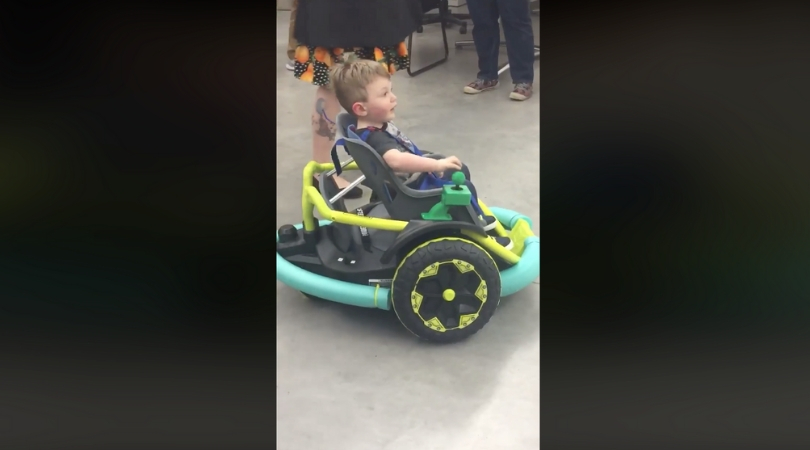 In today’s ‘feel good’ stories, a Minnesota high school robotics team builds its latest creation yet, which changed the life of a 2-year-old boy. Farmington High School’s robotics team, also known as the “Rogue Robotics Team,” decided to make an electric wheelchair for Cillian Jackson, who has a rare genetic condition that affects his mobility, similar to Cerebral Palsy.

Cillian requires a special power wheelchair to help him get around, that usually cost up to $20,000. Unfortunately, Cillian’s parents’ insurance doesn’t cover the cost, which is why the family reached out to the Rogue Robotics Team. The team decided to help out the toddler out of their own heart by teaming up with the University of Delaware’s GoBabyGo program.

GoBabyGo creates custom vehicles for children with limited mobility by providing mobile devices that not only fit the needs of the children so they can move around independently but make it entertaining for them by building a device that has a theme the child likes, such as a race car or a Disney princess mobile.

The high school robotics team took a few weeks to complete the chair for Cillian, saying the task gave them a goal to spark a passion for learning while enhancing their creativity skills. The students used a Power Wheels riding toy, that was provided by Cillian’s parents, and replaced the toy’s electrical components, mounted a seat from a bicycle, and designed a joystick with a 3D printer. The original toy had two joysticks that either moved the car forward or backward, but that wouldn’t work for Cillian which is when they decided to write their own code to make the motors respond to a single joystick to make it easier.

This is definitely so inspiring to see, especially since these students decided to help out the family without hesitation. Cillian’s parents typically put him in a stroller or carry him around whenever they go somewhere, but now with the help of the power wheelchair, the toddler has more control over where he goes. The modified “car” allows the 2-year-old to practice for when he qualifies via insurance to get a motorized wheelchair which he will need when he begins to attend school. Three cheers for happy stories!