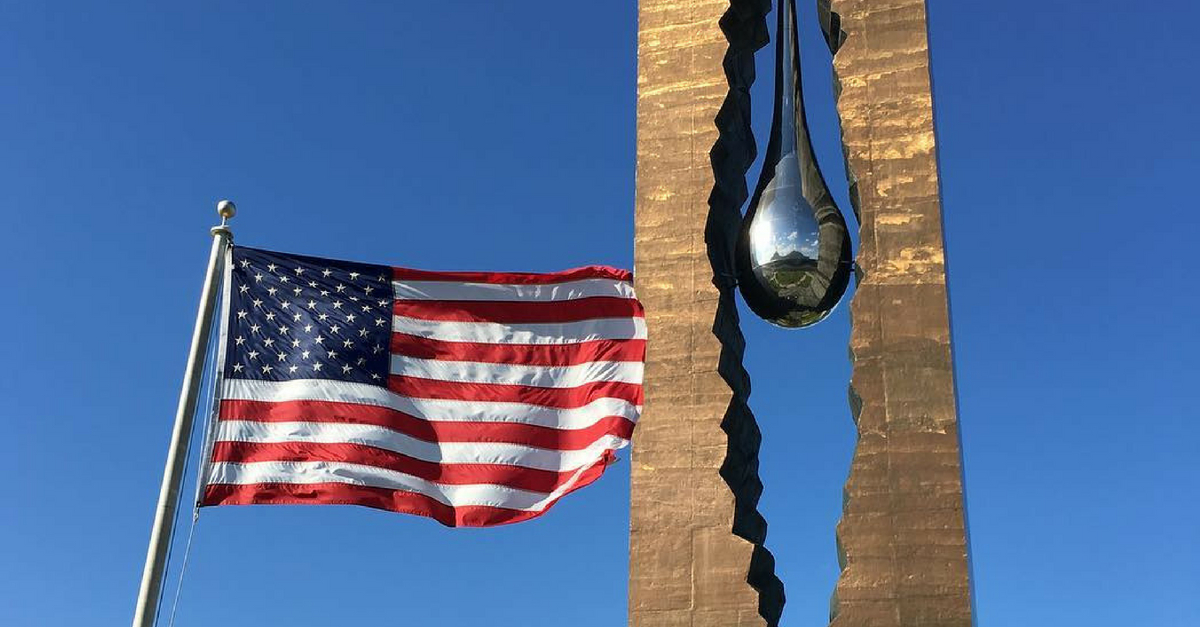 It?s safe to say that September 11, 2001, is a day that haunts people around the world, impacting the lives of Americans who lived through the terrorist attacks. Unlike most other days, 9/11 made a dent on every American’s life, on the future of our country, and the security of the world. It became a life-altering event that is remembered worldwide for the catastrophe it caused. Which is why the day has several memorials and monuments to convey the significance of the tragic events that occurred.

One of the most controversial 9/11 memorials is the Russian inspired sculpture, ?Tear of Grief?, also known to some as, “To The Struggle Against World Terrorism? monument. The forty-foot replica of a stainless steel teardrop suspended in a fractured 100 foot, 175 tons, and bronze-clad tower was a gift to the United States from Russia. The sculpture was created by Russian artist Zurab Tsereteli, where he envisioned the image of the sculpture after he witnessed the description of the World Trade Center on a Moscow television.

Tsereteli is one of Russia’s most prolific and prominent artists. He is a designer, architect, and sculptor who is known to capture significant historical events in usually large-scale sculptures and monuments on display in museums and public spaces throughout Europe, Syria, Israel, Uruguay, and the United States. Tsereteli reportedly spent $12 million of his own money to complete the Bayonne Harbor monument. He explained how later on, he drove past a gathering of crying Muscovites in front of a nearby U.S. embassy, which is when he began to design the ?Tear Drop Memorial? on the same day.

The entire teardrop monument was designed and built-in Russia, transported to the United States, and assembled in Harbor View Park on the Peninsula at Bayonne Harbor. The view from the beautiful two-acre public park of the New Jersey side of New York Harbor includes both the Statue of Liberty and the World Trade Center in Downtown Manhattan. The structure had a dedication ceremony on September 11, 2006, in a ceremony attended by former President Bill Clinton, Russian President Vladimir Putin, Senator Robert Menendez, Senator Frank Lautenberg, Secretary of Department of Homeland Security Michael Chertoff, and several family members of 9/11 victims.

The granite base of sculpture lists a total of 3,024 names of people who tragically died in the September 11th attack in New York, Washington, Pennsylvania, and six others who died in the World Trade Center bombing in 1993. Yet, the controversy around the piece is the fact that the artist used an outdated list, failing to remove 43 names that were deleted from the official record between October 2003 and January 2003, when their deaths and existences were found to not be proven. As a result of this, there was controversy and criticism, specifically after several opponents and neighborhood groups launched an aggressive campaign against the memorial. Residents, civic associations, and art groups joined together to derail the entire project. Several local culture art groups condemned the sculpture as ?an insensitive self aggrandized piece of pompousness by one of the world’s blatant self promoters?.

Usually, visitors sailing into the Port of New York will be able to see the Russian ?Tear Drop Memorial? off the port side before they see the Statue of Liberty, which was France?s gift to the United States. Ultimately, what Russians wanted to portray with the sculpture was a permanent expression of grief and empathy for the city of a country considered to be a political enemy.