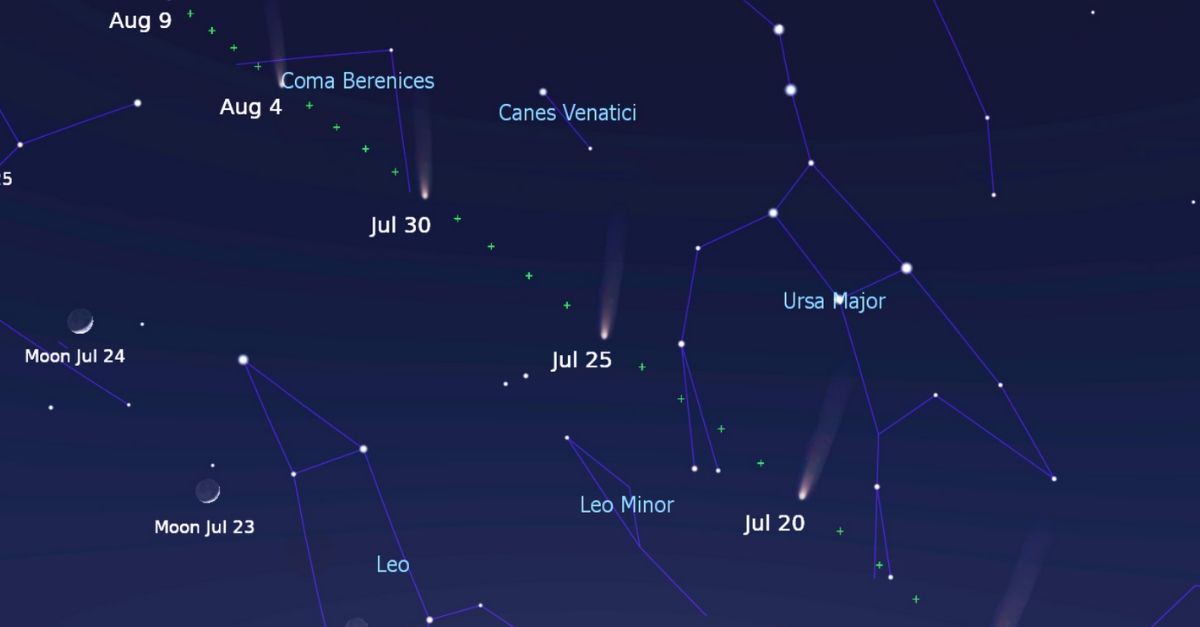 Set your clocks a little earlier than usual on July 19, 2020, to catch the moon and five other planets all stretched out across the morning sky with your own naked eye. Mercury, Venus, Mars, Jupiter, and Saturn will follow behind the moon, but you’ll have to be up at least 45 minutes before sunrise if you don’t want to miss it.

Take a pair of binoculars and catch the crescent moon and the other five planets in a curved fashion. In order to know where to look, find a place with clear horizons in the southwest and east-northeast. This is what you can expect to see:

Venus will be bright in the eastern sky, next to the star Aldebaran. The thin crescent moon will be very low in the east-northeast. Mercury will be to the right of the moon, and Mars will be about halfway up the sky in the south-southeast. Jupiter will be just above the horizon in the southwest, and Saturn will be to the upper left of Jupiter.

Starting the 15th #cometNEOWISE may be visible in the evenings! (~9:30pm)

Plus #Venus, #Mars, #Jupiter, #Saturn, & the #Moon… so much to observe in the sky this week. @AnthonyJCook2 has your weekly Sky Report, now available every Friday. Listen here:https://t.co/ASwMMQERXp pic.twitter.com/dvkD3nR5Zz

But if you want to see Uranus, Neptune, and even little ol’ Pluto, they’ll be in between Venus and Jupiter, but only seen with a 10-inch telescope and at even earlier times in the day. Pluto will be to the lower left of Jupiter around 1:00 am central time, and around 3:30 am, you can catch the other two planets right before the light starts to hit the sky. Neptune will be in the east-southeast, and just as the morning sky starts to light up, Uranus will be visible in the east!

You can still catch the planets throughout July. Venus, Mars, Jupiter, and Saturn will be visible in the early mornings up until mid-August without the moon, and after mid-August, Jupiter, and then Saturn, will disappear below the southwest horizon. These two big planets will be headed toward their Great Conjunction set for December 21, 2020.

The solar system is so fascinating, and nothing beats how wonderful it is to see how our Earth moves with the sun and the moon. It’s amazing to be able to see these parts of space, knowing they’re so far away.