Slab City Is the “Last Free Place” in America 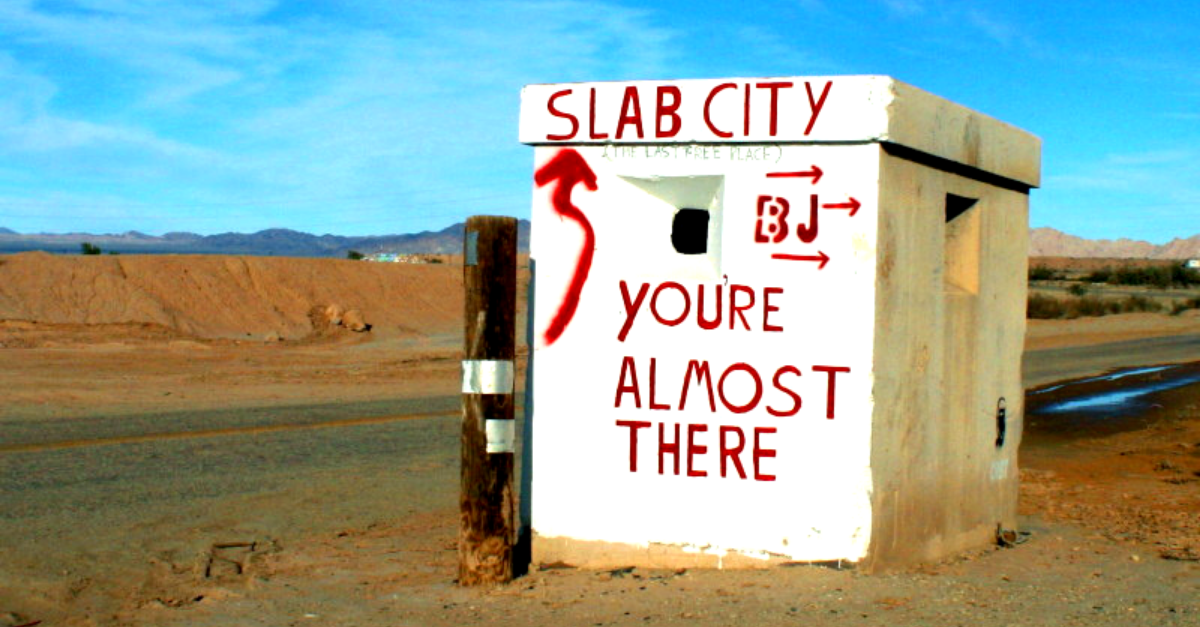 I once heard someone refer to Slab City, out in the Sonoran Desert of California, as “the real life Burning Man”. If you’ve never been to Burning Man or don’t even know what it is, let me just tell you that from here, things in Slab City are about to get very intense. Everything about this place comes off a little (or very) “hardcore”, if you will. If you’re a numbers person, maybe this will put it into perspective for you. Less than 1 percent of the world’s population is vegan, and there’s still approximately a million of those crazies (just kidding, the freedom to choose what you eat, America). The number of people who live in this community, however is even lower than that. Like, WAY lower. So with that in mind, welcome to Slab City.

Also referred to as “the slabs”, Slab City is known colloquially as the last free place in America. It’s marked by the nearby Salvation Mountain and the now decorated concrete slab that “welcomes” visitors in beige and teal paint, left over from WWII. It’s located about 100 miles (161 km) northeast from San Diego and 169 miles (272 km) southeast of Los Angeles. The best directions anyone could give are “Deep into the desert, and then south, past the Salton Sea” because it’s not exactly mappable. The closest town, Niland, is home to about 1,000 people and is about four miles southwest. This is where Slab City residents usually go to do their basic shopping.

Is Slab City still around?

You bet it is. This year-round community of approximately 150 people live in RVs, use generator and solar panels, and solar power for A/C because, well… they’re literally living in the middle of the desert. That’s right, Slab City residents have no internet, running water, sewage, working power lines, law enforcement, toilet facilities, or trash pickup service. “Slabbers” all have their own reasons to be there. Some are impoverished and living on the outskirts, others have government support and some just want to be left alone and off-grid. This place is also considered a “snowbird” community- for those who like to migrate to somewhere warmer during the winter months.

What’s all over Slab City?

While this place doesn’t quite resemble a typical town, they have a few things that make it feel “civilized” in some way. While there is no law system set up, the people behave in their own form of equilibrium. If you want to make friends and talk to people, you do. If you want to be left alone and leave others alone, they will extend the same courtesy to you. Another thing that makes this outskirt dwelling seem more civilized is the art. For this first installation, picture something off of the fridge in your childhood home. Salvation Mountain is this beast.

It is a large collection of art installations and religious symbols and phrases decorating a cave. It was all done by one man, Leonard Knight, over the span of 8 years. Imagine the most colorful mirage you could see in the middle of the desert, and that’s pretty much what it is. There is also The Range, which consists of a stage and 3-5 rows of used couches and loveseats. The Range is the place where the residents of Slab City gather on Saturday nights and show off their talents.

There is also a skate park, “owned” by a man with a dog named Bark Bark, who also goes by “Bark Bark”. How he made or stumbled upon what looks like was at some point an olympic sized swimming pool grafitti’d like a skate parks is beyond us. In Slab City, anything is anything!

Another noteworthy part of The Slab is East Jesus, which is basically an art community, complete with a sinking house, and TVs damning consumerism, along with a see-saw (Coachella meets Burning Man, anyone?) To learn more about Slab City, check out this amazing book of photographs and essay snippets detailing life on the edge of civilization.

If you’re wondering how it works and if you should make the move because for the third year in a row you didn’t get a tax return and your city is getting gentrified (ahem)…here’s the sitch. The land is owned by the state of California. The “slabs” of concrete that the city lives on are what’s left from former American military base, Camp Dunlap in World War II. So, in the most technical sense, the residents of Slab City are squatting. However, the state doesn’t seem to mind. They are aware the community exists and and pretty much leaves them alone. Would you visit or move to Slab City?

Watch: Why Are Social Security Cards Made of Paper?