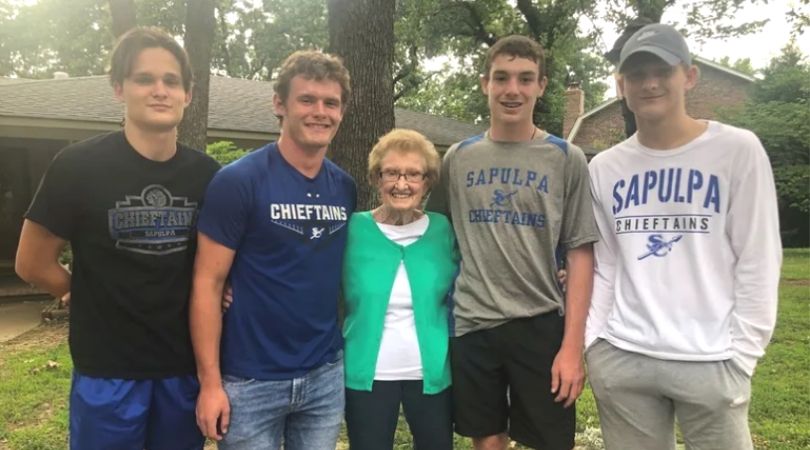 90-year-old Catherine Ritchie has lived in the same Oklahoma home for 58 years, in the Tulsa suburb of Sapulpa. Unfortunately, that tragically changed May 2019, after a heavy fire caused the home to burn down. Ritchie stated she was in the bathroom getting ready for bed, but when she turned around, she saw her headboard was on fire.

Luckily for Ritchie, four boys between the ages of 14 and 17 at the time in a nearby home were on their way to the convenience store right as the house fire started, and noticed the strong smell. Describing it as burning rubber, 16-year-old Dylan Wick said he heard the house alarm go off. Ritchie was still inside the home trying to put out the fire, but gave up, quickly called 911 for help.

The smoke had consumed the house, causing Ritchie to follow along the wall to make her way towards the front door. As she was feeling her way towards the house, the boys quickly jumped into action, trying to break down the doors to get inside. 14-year-old Nick Byrd managed to go through the back door, and run inside to find Ritchie in the hallways surrounded by smoke. The boy quickly swept her up telling her that he was there to get her out.

All 4 boys and Ritchie thankfully made it out safe, and the fire department was able to stop the flames before they spread throughout the home. Catherine’s daughter wrote a touching post online for the Oklahoma teens, thanking them for saving their mother.

Courageous young boys indeed. Risking your life for a stranger is terrifying, the fact that these kids were willing to sacrifice their life without knowing how bad the fire was, is really impressive. It gives me hope for the future.

Editor’s note: This article was originally published on June 6, 2019.