Wherever we come from or wherever we’re going, all we want is to feel like we belong somewhere. Like we have a home and a support system waiting for us, even if we’re oceans away from it. Most of us find this comfort in our blood family, others find it in childhood friends and in the families we create along the way. At Texas A&M, though, the student body and alumni find it in each other. This is what the Aggie Muster ceremony is all about: uniting those with the Aggie Spirit and remembering those who carried it with them for life.

No matter what day of the week April 21 falls, the Aggie Muster will go on. Beginning in 1903 as a way to honor fellow Aggies that passed away in the previous calendar year, the celebration shifted over time to coincide with San Jacinto Day, the battle where Texas gained its independence from Mexico. It officially became known as the Aggie Muster in 1943 after Major Tom Dooley and Brigadier General George F. Moore gathered together all of the Aggies they could on April 21, 1942, on the Philippine island of Corregidor while fighting the Japanese to take part in the tradition on foreign soil. As the Aggie Network tells it,

“Knowing that Muster might soon be called for them, these Aggies embodied the commitment, dedication, and friendship that is the essence of the Aggie Spirit… that small group of Aggies on an outpost in World War II inspired what has developed into one of our greatest traditions.”

Dooley wrote back of the Aggies who “Mustered”, and the rest is history. That story is just one of the many linking the Aggie Muster to the larger American conscious, and the list could go on and on with stories that would make your eyes well with tears and pride. So what exactly happens at the modern-day Aggie Muster?

Nowadays, alumni and the student body gather together at Reed arena on campus at Texas A&M University in College Station. 2018 was the first year the Sunrise Muster was held in which the name of every Aggie that passed away in the previous year is read at the Clayton W. Williams Jr. Alumni Center. The Texas A&M campus Muster is particularly dedicated to the 50-year reunion class of that particular year with a Camaraderie Barbecue and a keynote Muster speaker.

After poetry readings, including “The Last Corps Trip”, the Roll Call for the Absent takes place. This honors those Aggies who died in the previous year and a chosen family member or friend answers “Here” when a deceased person’s name is called. The chosen person then lights a candle in remembrance. The Ross Volunteers fire a salute of 3-volleys, come to “Present Arms,” then “Silver Taps” is played.

Those who can’t make it are encouraged to search for their own local Muster, held and organized by Aggies across the country. and the world. Musters are held as far as Seoul, South Korea and Kosovo. In fact, last year, Southwest Airlines even hosted the very first Muster in the sky.

Today, the Muster annual gathering is coordinated entirely by the student body and each year, it breaks records for the largest ceremony held on the Texas Aggie campus. This tradition, which is enough to make you wish you were an Aggie if you aren’t one, will forever bring the Aggie family together. The blending of current students with alumni at the class reunion bridges the generation gap of Aggies, proving in Muster tradition that the community is there for one another.

The American college system isn’t perfect, but instead of focusing on its downfalls (and every institution has its downfalls), it’s time we start encouraging the sense of community and family that universities give us. Whether you went to college or not, I’d be willing to bet that there’s one university that reminds you of home. Every university has its tribe of student, alumni, and supporters.

This annual tradition isn’t just about Aggies or Texans. It shows what kind of community we can create when we stop drawing divisive lines and start opening our arms to all those who came before us, and all those that will come after. And that, really, is the essence of Aggie Spirit.

Editor’s Note: This post was updated on October 10, 2019, after the original article published on July 13,2018, contained misleading information. The original article stated “The Ross Volunteers hold a 21-gun salute as “Silver Taps” plays.” The post was updated with the correct terminology, and now reads “The Ross Volunteers fire a salute of 3-volleys, come to “Present Arms,” then “Silver Taps” is played.”

Watch: The 10 Food Inventions to Thank a Texan For 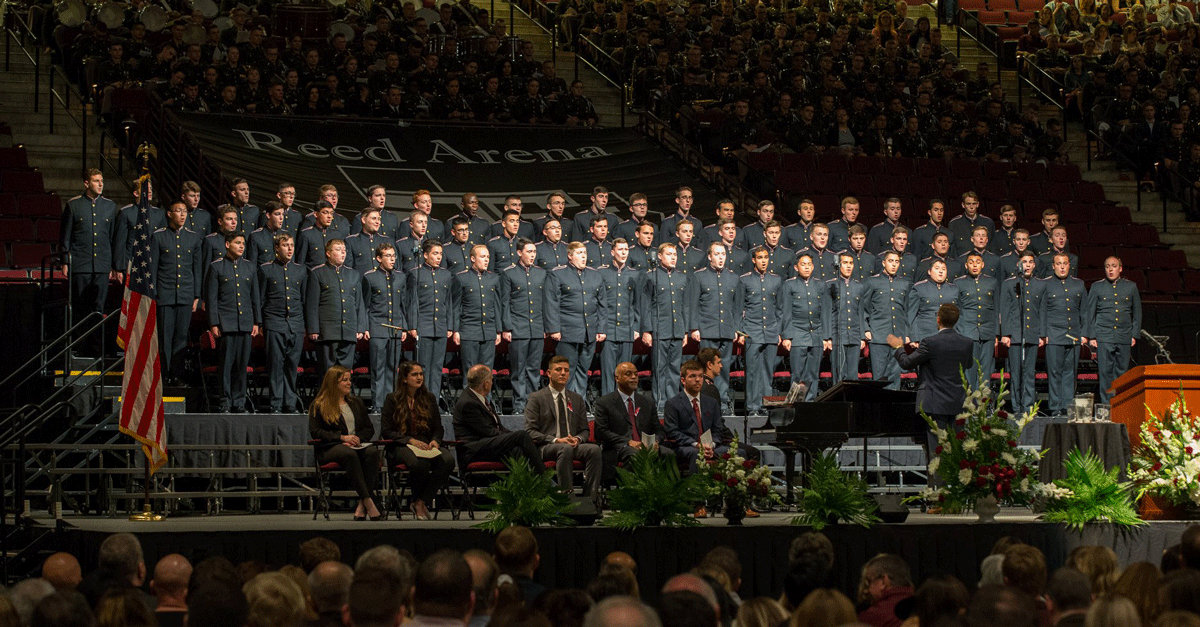