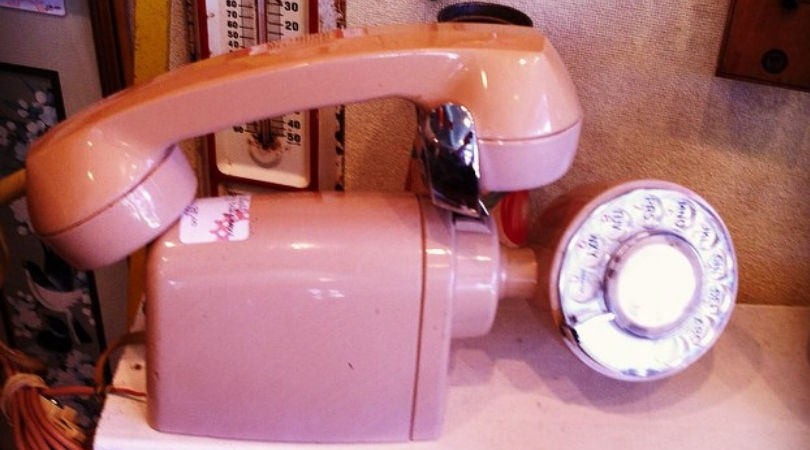 It’s weird to think that there are people on this planet that don’t know what a VHS tape or a floppy disk is. I mean, it’s not like they are 100-years-old. Sure, you probably have a few ’90s kids who might still have one vintage item stored around their parent’s basement, but the other younglings, they are clueless. Don’t believe me? Scroll down to item number 6. It’s truly devastating.

So, to freshen up these Millennials and Gen W, X, Y, and Z (kidding) we decided to take it back and list some of our favorite and most memorable items that remind us of the good old days!

Remember when you actually had to wait for your sister or brother to get off the line so you could make a phone call? Or when you absolutely had no privacy because the phone was mounted to your kitchen wall, meaning everyone could hear your conversation? Yikes, that was the worst. Luckily for Millennials and Gen Z kids, they don’t have to go through that embarrassment. Now they have their own smartphones to basically use it anywhere they’d like.

Still, it was pretty cool to have a landline. The only downside was people had to use their phone line to use the internet, which yes, meant that if you were on the phone no one could go online. No internet, you say? Oh, the horror.

Oh, how I miss typewriters! It was a fast way to write a letter. You really had to be very careful with these awesome machines though, especially when it came to typos. You either had to manually correct it or just, you know, retype the entire page from scratch. So maybe, just maybe, we’re grateful for computers now.

A post shared by ThriftsandGifts Resale (@thriftsandgifts_resale) on Jun 6, 2018 at 11:44am PDT

Transistor radios are a rare sight nowadays. These genius radios were invented back in 1947 and safe to say it was revolutionary for its time. It was like a portable news source where one could listen to music and important messages. Now all you have to do is get in your car and turn on the radio.

Share if you know what this? A milk chute, these had a door on the exterior wall, the milkman put your Milk, Eggs and bread into. Another door inside, allowed homeowners to grab the items. #MilkChute Call #HomeVideoStudio at 440-838-4336 for all of your video Needs.

Milk Chutes! Who remembers these bad boys? Milk deliveries were huge back in the ’50s and ’60s. So much so, that some homes already came equipped with a milk chute for the milkman to deliver them fresh milk. Yes, similar to your mailman delivering your mail, you’d get your milk straight at your door.

How convenient was that? Bye grocery stores, bye Amazon Prime!

Okay, so maybe some Millennials know about cassettes…but have they ever played one? The cassette tape is an analog magnetic tape recording format for “audio recording and playback.” It was first introduced in 1963 and yes, you’d basically had to rewind them to listen to your favorite song and hope that you stop in the right place. A true mystery.

Tying in with cassettes, remember the Walkman? These were amazing, I remember being in PE and getting excited when our coach would let us listen to our music while running. It felt good knowing that I could listen to my favorite song while trying to catch up with all the fast runners.

But hey, as long as you had a good CD or cassette, everything was fine. I haven’t seen a walkman in forever! Do they still sell these in stores? Also, please watch the video above, it made my heart hurt a little.

Believe it or not, several schools have decided to get rid of analog clocks because students can’t read them. Yes, the horror, the shame, the embarrassment. Schools in England have replaced the clock with digital ones so that during tests, children know how much time they have left. Because well, apparently before digital ones, they had no idea how to even read one.

Which is absurd if you asked me. But I do understand. Think about it, these kids don’t have to worry about clocks anymore, they have everything from tablets, phones, laptops, and even television.

Record players have slowly been making a comeback. We see Target, Walmart and Amazon selling these for ridiculous prices, trying to bring them back. Which is appreciated, and yes, I have even bought one for myself. But, many don’t remember the handy dandy record adaptors.

These adaptors were either plastic or metal and were inserted in the middle of a 45-rpm record so it can be played on the 78 rpm size or the LP of a turntable. Usually, the adapter was a small solid circle that got onto the bottom of the spindle or a larger adapter that fits over the entire spindle.

I don’t profess to know anything about cameras but I will say that this collection of Brownies is just a treat for the eye. Available in the shop in Blockhouse. #vintagecamera #vintage #kodak #vintagekodak #browniehawkeye #browniecamera #brownie #brownies #mahonebay #blockhouse #shoplocal

When I was younger, I remember my grandfather had one of these brownie cameras. Kodak sold millions and millions of these between 1952 and 1967. People loved them since they were the easiest and cheapest source of home photography that someone could own. Also, let’s not forget the fun developing film. It was a pain in the butt, that’s for sure, but it was cool to see how your photos came out by pointing the film to the sun.

Last summer, some of my friends and I decided to get a disposable camera, and it took us ages to find out where we could develop the film. Different camera, but the same process. Turns out Walgreens lets you develop them, but for quite a price. You’re welcome!

Ah, green stamps! The program by the Sperry and Hutchinson company was the first to retail a loyalty program. It spawned a loyalty program for virtually every store in the US today. Basically, one would shop at various locations such as grocery stores or gas stations, and one could earn stamps of various denominations for each purchase.

Then, these stamps could be redeemed for special customer rewards! Think of it as a special bonus. The Green Stamps program was popular in the ’60s and ’70s, although S&H has since converted its model to digital “Green points.”