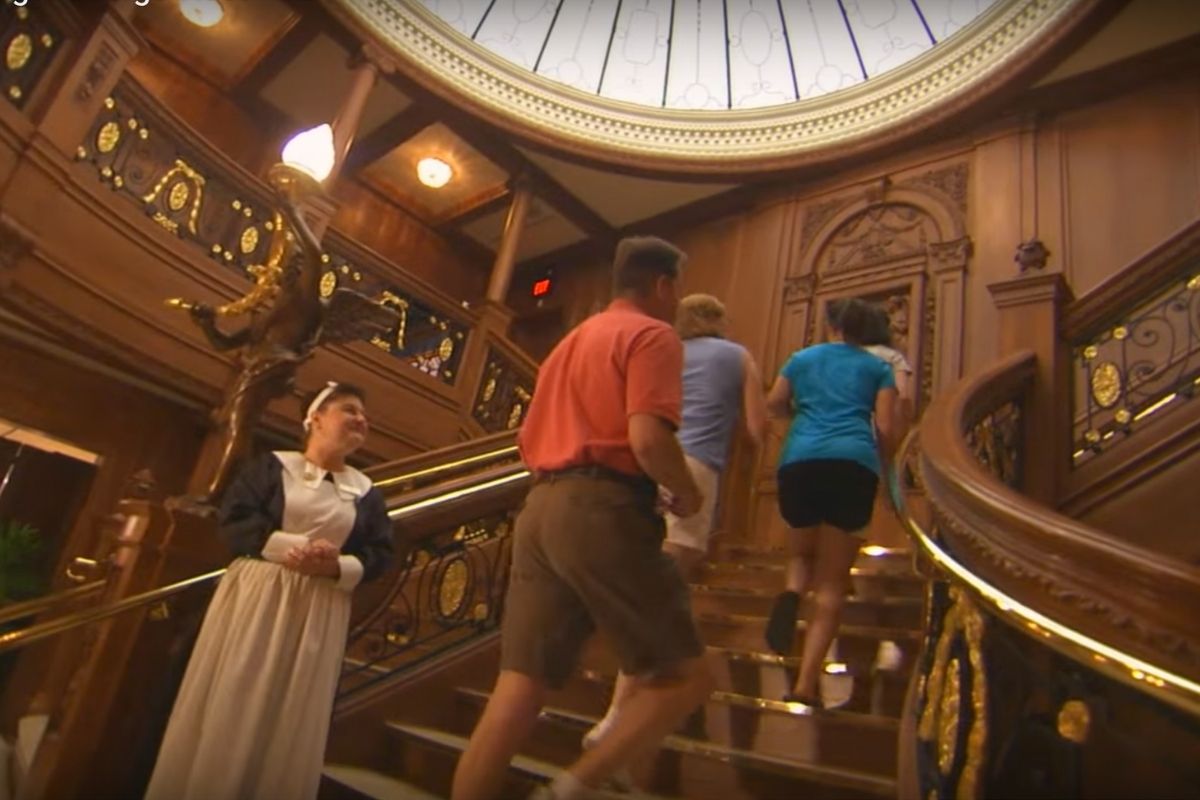 We are all familiar with the story of the Titanic, thanks to James Cameron’s epic love story set aboard the sinking ship. But beyond the fictional romance of Jack and Rose, the RMS Titanic occupies a significant place in history as the largest ship on any water when it set sail in 1912. Of course, tragedy followed. The passenger liner — once symbolizing the pinnacle of luxury — became a shocking catastrophe that illustrated the grave cost of human error. This culturally rich saga is explored in-depth (no pun intended) at the immersive Titanic Museum in Pigeon Forge, Tennessee.

The Maiden Voyage of the RMS Titanic

The RMS Titanic was a British passenger which began its first trip on April 10, 1912, heading from Southampton, England to New York City. Packed with 2,2224 passengers and crew members, the Titanic was the largest ship afloat at the time. Captain Edward Smith was dubbed the “Millionaire’s Captain” for his popularity among wealthy British patrons. He was a natural choice to head a ship with interiors modeled after expensive hotels. The Titanic was equipped with a saltwater swimming pool, gyms, a squash court, a Turkish bath and a sauna… But First Class Titanic passengers enjoyed those opulent amenities for less than five days.=

At midnight on April 15, 1912, the Titanic struck an iceberg, puncturing the starboard side of the ship. As the Titanic had been by behind schedule, it’s generally thought that Captain Smith responded to pressures by the White Star Line to keep up the ship’s speed. This likely influenced its collision with the iceberg, as the damage was extensive and swift. SOS signals were flared but when five compartments of the Titanic flooded, it became clear that this floating monument was doomed.

The Titanic carried 20 lifeboats, each fitting 47 people. These lifeboats were filled, as we all know, with “women and children first.” Those survivors were soon rescued by the RMS Carpathia. In the end, more than 1,500 people drowned. Even those who fashioned flotation devices still froze to death in 28-degree water. Among the many victims were Captain Smith and Wallace Hartley, the violinist who led the Titanic’s band. As legend tells, the orchestra really did play even throughout the liner’s devastating descent into the Atlantic. And there it sits today, remnants on the ocean floor.

Although the RMS Titanic rests at the bottom of the ocean, history enthusiasts have the chance to experience the boat’s decor like an actual Titanic passenger might. In Pigeon Forge, Tennesee, the Titanic Museum is truly modeled after the infamous ship. Although it’s only half as big as the RMS Titanic (and permanently on land), the Titanic Museum houses a whole Victorian world inside its doors.

The Titanic Museum has recreated the ship’s gorgeous rooms ot full-scale and painstaking historical accuracy. The museum even includes a $1 million grand staircase replica — the only one in the world which matches the original Titanic’s. Aside from the physical reproductions, the museum also houses more than 400 Titanic artifacts rescued from the wreck site, including Wallace Hartley’s violin (valued at 1.7 million dollars) and the world’s largest collection of remaining Titanic life jackets. For the kids, it even has the world’s largest Titanic Lego ship! Nearly everything at the Titanic museum attraction in Pigeon Forge is colossal and record-setting, like the original boat itself.

Inside The RMS Titanic

With glitzy interactive exhibits, visitors will feel utterly transported. The museum’s inspiration certainly does not draw from the ship’s third class cabins. In Pigeon Forge, visitors can imagine what it would be like to eat, dance, and dress aboard the Titanic as those passengers with a first class boarding pass. This is especially true of the museum’s secret dinner parties. The special events are held in a secret dining room which makes use of the museum’s most lavish decorations. You can plan your own “secret” dinner party by calling the museum at 1-800-381-7670. You can also check out www.titanicpigeonforge.com for more details.

The Titanic Museum also offers special Christmas packages and tours, although the Covid pandemic has affected the museum activities. Face masks required. Plan your visit today at 2134 Parkway, Pigeon Forge, TN 37863 — just five miles from Dollywood! And for those of you further from the Great Smoky Mountains, museum operator John Joslyn (who actually headed the Titanic scuba expedition in 1987) has opened a second Titanic Museum, located in Branson, Missouri.

Watch: Was Rose in ‘Titanic’ Based on a Real Person