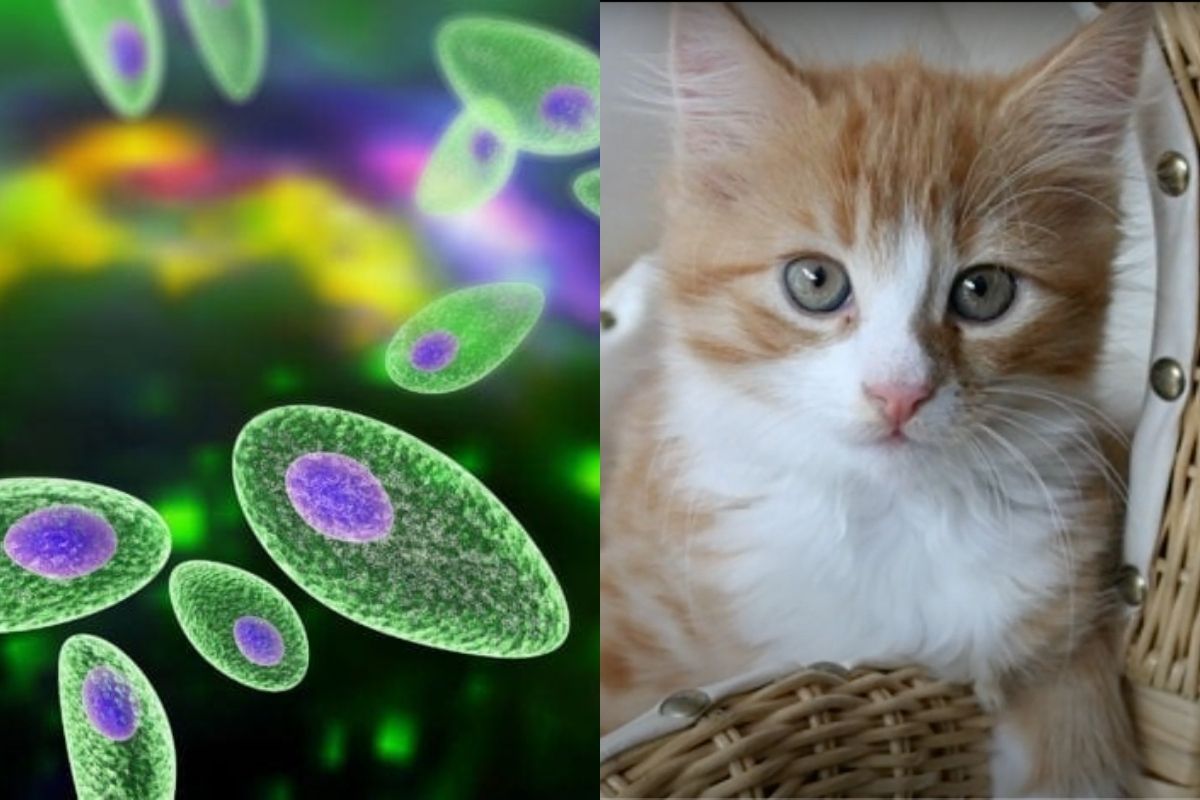 The parasite Toxoplasma gondii, or T. gondii, primarily infects domestic cats but our furry friends can act as intermediate hosts before the mysterious organism latches onto humans. And it’s more common than you might think — especially in first-world countries. Roughly 84% of people in France are believed to be infected, and 11% of Americans. Luckily, the T. Gondii infection is not too dangerous. But its effects are noticeable. In fact, researchers believe that T. Gondii is responsible for some of the personality traits we might take for granted. While a Toxoplasma gondii infection will often make men become suspicious, infected women become more warm-hearted and outgoing. Yes, this real parasitology: biological science.

Getting infected with Toxoplasma gondii causes toxoplasmosis. Since cats are the only definitive hosts for this protozoan parasite — meaning cats are the only animals in which T. gondii can reproduce — it’s close contact with cats that causes toxoplasmosis in humans. But how are cats infected? Normally through the ingestion of raw meat, according to PubMed. If caught by a cat, the parasitic infection spreads easily to cat owners through litter box or sandboxes since cat feces carry oocysts (essentially, T. gondii tissue cysts) which are a breeding ground for a protozoan parasite.

Technically, that makes toxoplasmosis a foodborne infectious disease. According to the Centers for Disease Control and Prevention (CDC) affects more than 40 million men, women, and children in the U.S. Most immune systems can keep the parasitic disease at bay, but pregnant women should be aware — and especially careful during their third trimester. A fetus is highly likely to inherit congenital toxoplasmosis, a congenital infection that causes lesions — and can even be deadly. Doctors advise pregnant women to cut out seemingly everyday risk factors, like scooping cat litter. Additionally, Toxoplasmosis can be especially dangerous for AIDS patients by attacking their central nervous system.

For the most part, though, adverse reactions to toxoplasmosis are rare. Many people’s immediate immune response includes acute infections and flu-like symptoms, but after a while, the T. gondii continues to thrive undetected. So what happens once you get it?

The Life Cycle of T. Gondii

Epidemiology research into toxoplasmosis is still ongoing. But the prevalence of certain traits in infected specimens point clearly to some terrifying, and fascinating, trends. In rats, toxoplasmosis causes fearlessness. Yes, it actually makes our least favorite pest even more annoying. Running around boldly, these rodents are more likely to get bitten by a hungry cat. T. gondii can jump between any warm-blooded animal, but infected cats are the goal since the conditions of a feline offer their sole chance at reproduction.

It’s the mind-control that T. gondii exerts over human beings, though, that exhibits the true power of this strange parasitol pathogen. Meta-analysis points to the possibility that living with toxoplasmosis increases one’s chance of developing serious mental illnesses like schizophrenia and bipolar disorder. And though most infected people might seem asymptomatic, there are subtle personality traits affected by toxoplasmosis — and they occur much differently in men versus women. According to a study published in 2007, Infected males show higher levels of testosterone which causes them to ignore rules and act suspiciously and jealously. Females, meanwhile, display more generally positive traits: kindness, sociability, and strong morals.

Roughly one-third of the human population likely carries T. Gondii. Its high seroprevalence (meaning the level of a pathogen in a population) also has more general consequences for our species. For example, infected people have more trouble concentrating and are 2.65 times more likely to get into car accidents. So be honest with yourself… do you think you have toxoplasmosis? It’s hard not to wonder, but also don’t drive yourself crazy — there’s no cure.