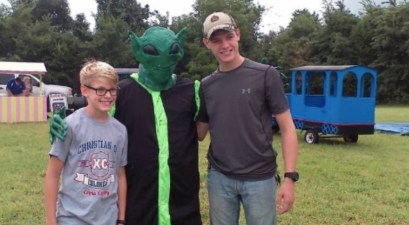 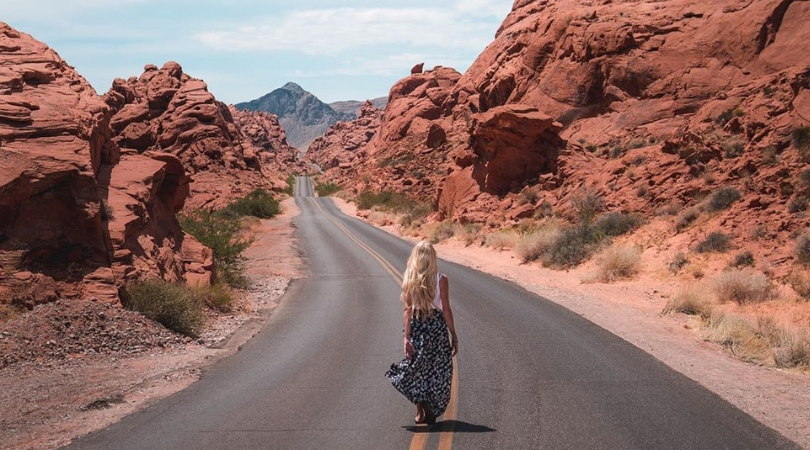 If the prospect of gambling doesn’t intrigue you and you’ve seen the Hoover Dam one too many times, consider hopping on over to check out the Valley of Fire State Park in Nevada’s the Mojave Desert. The park consists of sand dunes evaporated from an evaporated inland sea eroded and shaped by wind over centuries.

No, it isn’t actually on fire, like some places, thankfully. The name comes from the red Aztec sandstone rock formations that make up the park. When the sun hits the red rock it looks like the valley is on fire because of the brightness and pigmentation of the rocks. The Valley of Fire State Park in Nevada is the perfect day trip away from the city. There’s plenty to do in its 150 million-year-old, 40,000 plus acreage an hour from Las Vegas.

Outdoor adventurers, photographers and nature enthusiasts alike find something to enjoy here, at Nevada’s first state park. The park is open sunrise to sunset every day with a small entrance fee for $10 per car. If you intend to camp in one of the 3 campgrounds the cost is $20. But, if you decide to go in the summer, be careful since there can be heavy thunderstorms despite it being desert. The Vally of Fire visitor center is open 8:30am-4:30pm with the necessities restrooms, water fountains, water for sale and some snacks and park guides.

Here are a few Valley of Fire must-see spots:

We decided the cold was not for us! We chased the sun to #Nevada to #valleyoffire 🔥 WHAT A BEAUT 🔥 #firewave 🥓

The Fire Wave trail is similar to Arizona’s “The Wave” with its pink and white-painted looking streaks. Fire wave has a bowl-shaped depression with just a couple of rising points covered with way lines. The trail is a 1.5-mile round trip with 175 feet of elevation change. The fun thing about this trail is that it is a newer trail in Valley of Fire State Park, and doesn’t’ appear on some older maps. But, know that it is definitely worth checking out since it’s beautiful!

If you’re guessing why these rocks are called Beehive, well it’s because you guessed it, resembles an actual beehive.  Thanks to natural elements of water, sand, and wind erosion to the red sandstone we have nature imitating itself. The beehive rocks are near the west side of the park, closer to Las Vegas. It’s a perfect representation of geological cross-bedding, with grooved lines going in different directions. Each layer of bed represents different layers of the slit that deposited at different times.

Atlatl Rock is another peak of interest as it is covered in petroglyphs. What exactly is an atlatl? It’s a device used for launching a spear or a short cord that would be put around the spear so that when thrown into the air, the weapon will then rotate. The Anasazi people who resided in this space before us used this valley for hunting game and religious ceremonies, these markings give cool clues to what their lives were like. The Atlatl Campground has over 40 campsites, and the best part about it is that some come with water and power hook-ups!

This Tank Road has some of the best hiking trails and views in the Valley of Fire, most of these hikes are relatively short and sweet. The White Domes trail, Pink Canyon, Silica Dome Overlook and Fire Canyon are also accessible from here. Fun fact: The area was named after a large desert pothole was used as a semi-permanent water source by the Paiute Indian renegade, which were known as Little Mouse. By having water, this allowed Little Mouse to hide out in the sandstone terrain during the 1890s.

Arch Rock formed over many millennia by strong winds and rain washing away material holding its sand grains together. Basically, the roc weakened over time which allowed the natural arch to form,. People believe the rock will grow to a point where it will ultimately collapse, which is why no one is allowed to climb it. But, you are able to enjoy it visually before further erosion makes it just a memory. Plus, who doesn’t like a good photo opportunity? Anything for the ‘gram.

Also known as pink canyon, Pastel Canyon is a small but one of the prettiest parts of the park. It’s not quite a hike, but worth seeing, I mean, just look at those hues! It looks like Tinkerbells sneezed and released some bold bright colors on the rocks.

White Domes is another short and easy to walk, with large boulders and varying rock formations and can even make its own little canyon. Keep your eyes out for the remains of an old movie set, shot in 1966, The Professionals. White Domes are sandstone formations with contrasting colors over a one-mile hike, so rest be assured it’s not too much walking. It’s a moderate look that combines a slot canyon, seeping dessert vistas, caves, and color galore!