Did You Know The ‘Steel Magnolias’ House Is Now A Bed and Breakfast?! 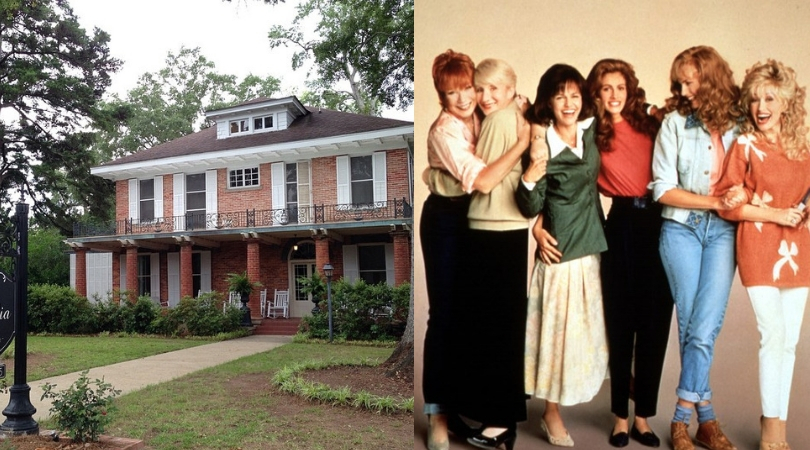 This is not a drill! I repeat this is not a drill! The Steel Magnolias House is available for you to rent out! Yes, Steel Magnolias fans are able to experience the magic of the beloved Southern classic film first hand and take a trip down Natchitoches, Louisiana. The 80?s drama and comedy, or dramedy (see what I did there?), is a film adaptation of Robert Harling’s play written in 1987. The storyline follows a group of woman, coping with the death of one of their own. Staring in the film are well-known actresses, Dolly Parton, Julia Roberts, Sally Fields, Shirley MacLaine, and Daryl Hanna.

In 2003, the beautiful brick home was converted into a Bed & Breakfast, named The Steel Magnolia House. So original, so creative. More than 30 years after the release of the film, fans can visit the ‘set’ and live out their Hollywood dream. The house includes everything from a front parlor, main dining area, kitchen dining room, sitting area, patio, and a pool and a pavilion.

The four-story home was restored in the early 1940s, including the cellar, attic, and modernized to fit the needs of the family at that time. But, the interior and exterior of the home located on Jefferson Street have remained the same through the year. The best part of the home? Guest can stay in six different suits, each named after the characters from the film!

For example, the Shelby Room, who is a fan favorite, screams out Shelby?s signature pink lifestyle. The Shelby, portrayed by Julia Roberts, features a private bath, which is the same tub that is shown in the opening scene. The other rooms are also named by movie characters, Clairee, Ouiser, Jackson, Shipley, and Annelle.

Of course, the house couldn’t be completed without some antique and Steel Magnolias memorabilia, such as costume sketches and behind the scene photos throughout the home. After all, the 5,900 square foot home-built in 1841 hasn?t changed much since its role in the movie.

The house features a beautiful Southern front porch, with a row of wooden rocking chairs, and live oak trees scattered around the property. Inside the home, one can see the original wood floors still intact, the exquisite crystal chandeliers and gas-lit fireplaces with marble mantels.

What do you say, are you up for it? The Bed & Breakfast offers the traditional bed a breakfast experience and true Southern hospitality for a total of $200 per room per night. Prices do go up during the holiday seasons, especially at Christmas so you might want to reserve your spots a few months before. Ready to book? You can visit the booking website, or call 318-238-2585.