Congratulations are in order for two historic war veterans, who fulfilled their dream of walking across the stage in a cap and gown, more than 65 years after they left high school. 95-year-old Joe Perricone served in World War II and 85-year-old Bill William Arnold Craddock served in the Korean War, which is why both veterans missed out on graduating with their senior classes.

Perricone was a student at Hillsborough High School in Tampa, Florida, where he was drafted to serve in the US Army in World War II in 1943. Although he received his diploma, Perricone never got to walk at his graduation. Which is why 70 years later, his grandson, Judge Thomas Palermo, worked together with the school to arrange a special diploma for his grandfather to thank him for his service, while he walked across the stage with the class of 2019.

Sure enough, wearing a bright orange gown and matching mortar board cap, Perricone received a standing ovation from students and teachers as his name was called out, walking down the stage with a bright smile.

Just a few states away, a similar story was unfolding, as Craddock was also receiving recognition from crowd members. At just 16-year-old, Craddock joined the Airforce and left Volunteer High School in Churchill, Tennessee without walking with his 1953 class. Although he did get his GED during his nearly eight years in the Air Force, he wasn’t able to participate in the graduation ceremony until this year.

GUARANTEED GOOD NEWS: Bill William Arnold Craddock is an 85-year-old Korean War veteran who never got to see his high school graduation. That all changed today in Church Hill. https://t.co/urZSakn1NY

Craddock brightly joined the 2019 graduating class and was given his diploma, 66 years later. In an emotional state, Craddock stated, “I’m tickled pink that I went through this to get this. Seeing all the people, and they have made me feel good.” When asked if he had any advice for his fellow graduating class, he said he would tell them to study hard and be good. As well as to get the best education they can get.

Congratulations to these two brave veterans, and thank you for your service, your hard work, and ultimate sacrifices. 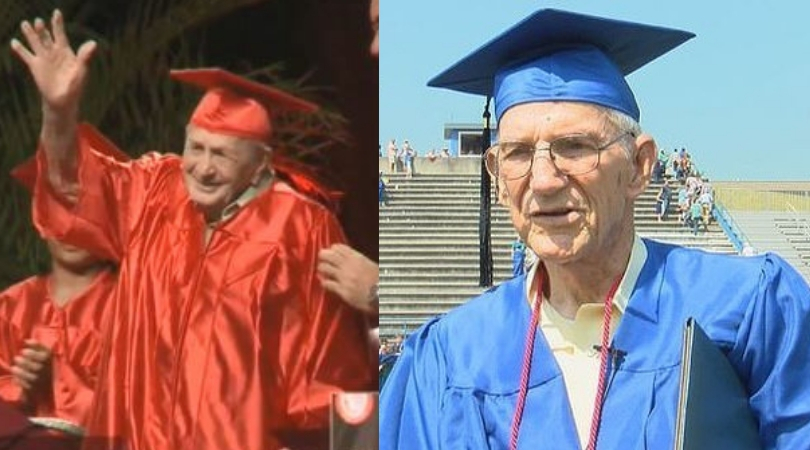