Wayfarers Chapel: The Wedding Venue of Your Daydreams 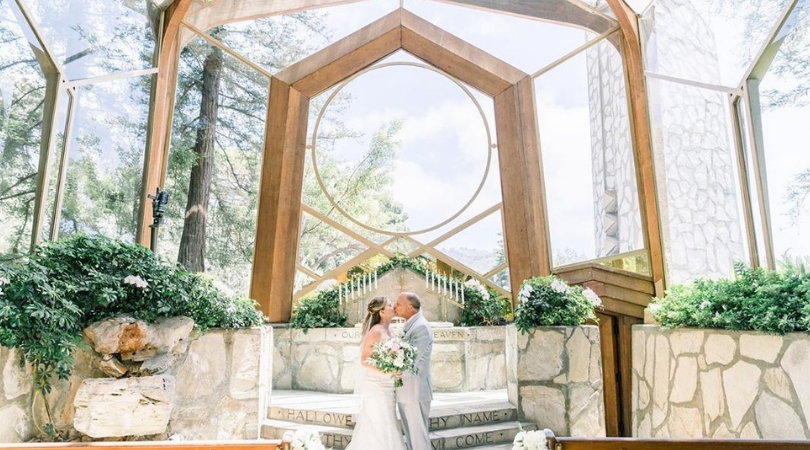 With June right around the corner, summertime appears to finally have arrived. It’s time to enjoy those long days stretched out by the pool, drinking copious amount of lemonade while working on that enviable summer glow in your trendy bathing suit. The approach of summer also calls for vacation.  And our collective favorite part of the summer, of course, the fun and glorious wedding season.

Whether you’re on the hunt for a venue that will make your friend who stuck you in yet another ugly bridesmaids dress, or just want some sick pics for the ‘gram or to simply enjoy some cool views, you should really check out this Swedenborgian Glass Chapel.

The Wayfarers Chapel, otherwise known as “The Glass Church” is a stunning architectural jewel nestled into the Californian redwoods of Rancho Palos Verdes in Los Angeles, California.  This stone and glass chapel, built between 1949-1951, sits above Abalone cove and overlooks the scenic Palos Verdes peninsula. This location was previously acres of open farmland. Elizabeth Schellenberg, a member of the Swedenborgian Church, was the first to envision the potential of what was once a stretch of gravel from San Pedro to Palo Verdes Estates. She dreamed of having a chapel where travelers could stop, reset, and give thanks to God.

Southern California architect and son of Frank Lloyd Wright, Lloyd Wright was asked to head Elizabeth’s dream after World War II. Lloyd Wright drew influences from his father’s architectural and interior design eye and incorporated geometric elements and the natural surroundings of the redwood trees to give nature a centerpiece in the chapel’s design.

The chapel itself features modern architecture complete with cathedral-sized windows granting its visitors to be bathed in sunlight glimpsing between the trees and a panoramic view of both Catalina Island and the Pacific Ocean. Another breathtaking natural element perfectly displayed is the ever-in-bloom rose garden, often captured in dreamy wedding photos, taken by photographers who work closely with the chapel staff. Years after the chapel was completed, extensions including a tower and a visitor center were added. While the original visitor’s center was lost in a landslide, the current visitor’s center is open daily and to the public.

Look closer….how amazing is this GLASS CHURCH! It’s sitting on a cliff in Rancho Palos Verdes and was designed by Lloyd Wright, son of Frank Lloyd Wright. It’s part of the Swedenborgian church of North America and is serving as a memorial for its founder Emanuel Swedenborg. Cool fact for me being Swedish 🙂 🇸🇪

The chapel grounds serve as both a place of worship and a highly sought after wedding venue. Denominationally, this tree chapel, as it is referred to by some, is a Swedenborgian church.  Swedenborgian being a branch of the Christian religion that follows the teachings of Emanuel Swedenborg; who was a Swedish Lutheran theologian, philosopher, and scientist. Wayfarers Chapel is the National memorial for Emanuel Swedenborg in the United States.

However, the church welcomes all, as it is self-proclaimed to be a sacred space “that welcomes all Wayfarers along life’s path” as stated on their welcome page (wayfarerschapel.org). In addition to baptisms, memorials, and prayer services, the chapel also offers Yoga classes, dream interpretation, and various workshops which they update on their website, or can be found by visiting the visitor center.

Where is it located?

Aside from the church itself, there are endless activities to do in the surrounding areas. Wayfarer’s Chapel is located at 5755 Palos Verdes Drive South, California. Since it is a coastal destination, hikes along nearby trails and overlooking the South Bay area are a few activities visitors like to enjoy while being there. Visible on the property is the Point Vicente Lighthouse, where migrating whales can be seen, during their migration season. The San Pedro landmark Vincent Thomas Bridge is also a favorite, which is a little further inland. Lastly, keep an eye peeled for the Palos Verdes Blues, the peninsula’s endangered butterflies, which can also be spotted from time to time.

If this ocean view property looks familiar, it may be due to its recent features and nods from pop culture. Wayfarers chapel has made TV appearances on 90201, ABC’s Revenge, Fox’s The O.C., Endless Love, HBO’s True Detective, and a Marina and the Diamonds’ music video. A nearby hotspot, The Korean Bell of Friendship has similar fame, having been featured in The Usual Suspects.

Wayfarers Chapel is a unique haven and representation of breathtaking organic architecture and is an awe-inspiring destination for all who visit. It seems hard to believe that so much wonder, beauty, and curiosity can be found in one spot. But it’s true! Head to wayfarerschapel.org to plan your next visit or event, and you can thank us later.

Watch: You Can Visit a Life-Size Noah’s Ark in Kentuck