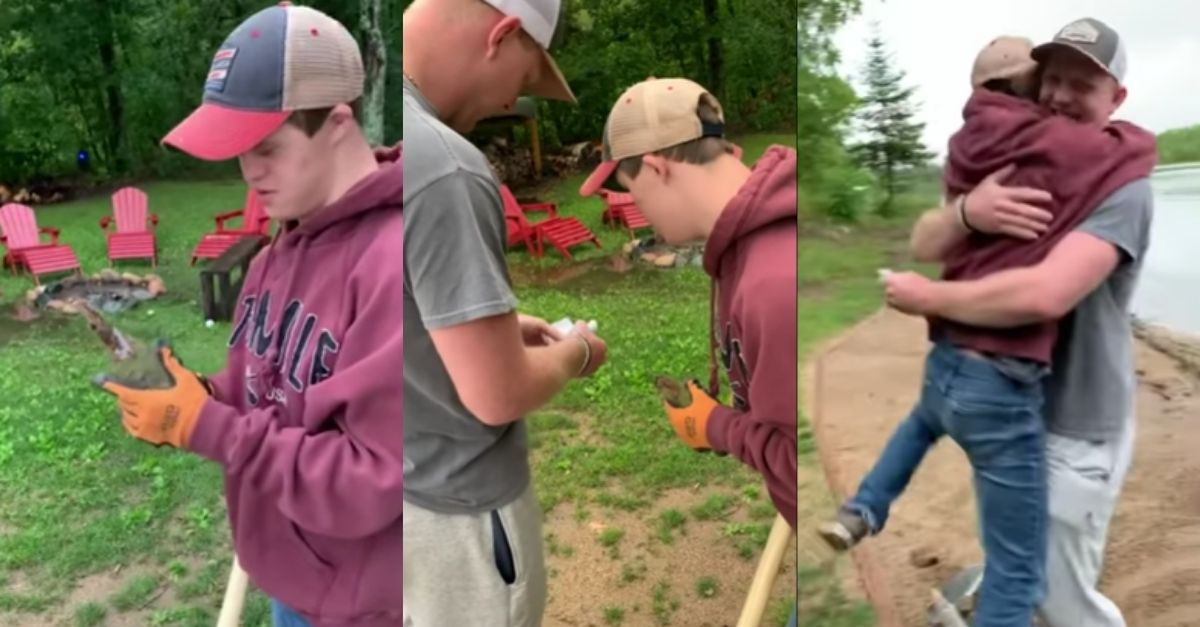 If there’s an award winning way to ask someone to be your best man, this is it. Will Claussen should win “Brother of the Year,” after he asked his brother, Henry Claussen, to be the best man at his wedding. And the video showing how he asked Henry Joe to be a part of his special day is incredibly heartwarming.

Henry Joe has Down Syndrome, and Will wanted to make this entire event special. So on August 15, he put a message in a bottle, which he then buried in his backyard in Hackensack, Minnesota. Will’s fiancé, AJ Johns, was also part of the special moment, filming the soon viral video.

The couple had Henry Joe start digging for the special glass bottle in excitement to what could be the buried treasure. Will and AJ play along and pretend to be just as surprised as Henry that there is a special message in the glass bottle. Henry even funnily, but skeptically asks Will if he put the message in there, to which Will immediately says no, just as someone who would be considered the best brother would do.

Will helps Henry open it, and Henry is still skeptical saying that this whole thing is a prank. But as Will helps Henry read it, Henry soon realizes what Will is asking. The note said, “Hey Joe, you are already the best bro, and also the best friend. So will you please say yes to be my best man? Love, Will.”

Once Henry realizes what Will is asking, the waterworks start to come out as Henry excitedly jumps on Will in disbelief that Will has asked him to play such an important part on his important day. As they celebrate, you can’t help but tear up hearing them exchange “I love you’s” in all their excitement.

The viral video went trending on social media, especially after basketball player Rex Chapman, shared it in a tweet on Twitter. This is the kind of positivity you want to see in the latest news during the coronavirus pandemic. Maybe there’s no such thing as perfect love, but maybe perfect moments are worth searching out more, especially while COVID-19 is taking the most out of everyone.

They found a bottle in the back yard with a message inside.

“Henry Joe, you are already the best bro, and my very best friend, so will you please say yes and…”

I’m here for all of this.🌎❤️pic.twitter.com/a8A39PIZQF

Watch: Mother-in-Law Interrupts Bride in Middle of Her Wedding Vows, Screams at Her