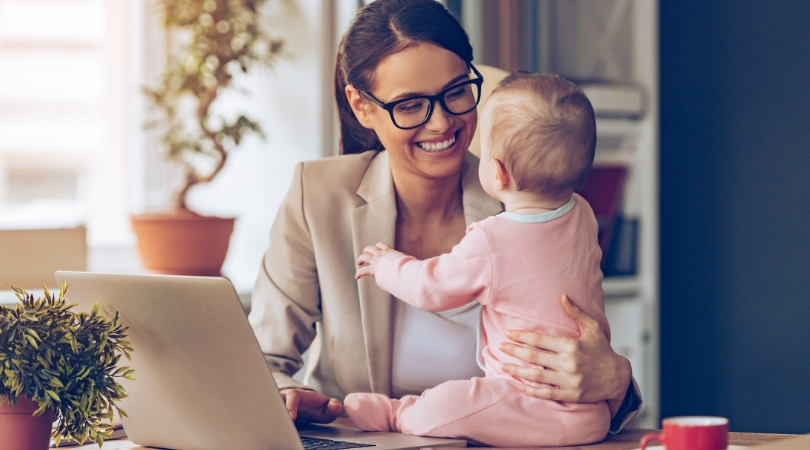 A new study led by Kathleen McGinn, a Harvard Business School Professor, found that children of working moms wind up just as happy in adulthood as the children of stay-at-home-moms.

According to the research, daughters of working moms were more likely to advance in their personal careers, and sons of working moms go on to spend 50 minutes more each week caring for their families. The study also showed that children turn into happy adults regardless of their mother’s employment status. Throughout the paper, Mcginn commented on how she started the study in hopes her findings would bring a sigh of relief for ?guilt-ridden? mothers, who either have to find a job to make ends meet, or simply choose to work outside of the home while raising their children.

?People still have this belief that when moms are employed, it?s somehow detrimental to their children. ?So our finding that maternal employment doesn?t affect kids? happiness in adulthood is really important.?

Sure, the study isn?t about how to raise happier kids, but what she wants mothers to understand is when women choose to work, whether it’s a personal or financial choice, it?s okay — meaning, they are not harming their children.

In 2015, the same research group conducted another study, where they found adult daughters that had mothers who worked outside the home were more likely to work themselves and have successful careers. Daughters would also hold more supervisory responsibilities and earn higher wages than women whose moms stayed at home full-time. Could it be these women saw the struggles and the hard work their mother faced day-to-day, which is why they grew up the way they did?

This one has taken me unusually long to write. Maybe because there was so much that I felt about it and so many different ways this could have been written. This is my first attempt at sharing with you what going back to work meant for me. I did the full circle of going from working full time to being a stay at home mom (full time) and now being back at work full time but working from home. You can read the complete post here: https://wp.me/p9Wo0w-ZK Share this post if you think it will be useful to other moms in a similar phase of their life. Love Always! ❤️ #momlife #worklifebalance #mom #workingmoms #stayathomemom #worfromhomemom #balance #career #ambition #kids #parenting #professional #keepthefaith #keepingitreal #momsofinstagram #kidsofinstagram #network #workforce #wineandonesie #blogger #momblogger

The 2015 study, conducted by researchers from the United States and the United Kingdom, had two surveys of more than 100,000 men and women across 29 countries, which revealed how the employment of their working mothers affected their adult children, both in terms of how much time they spend at home doing housework and caring for their children, and in terms of their own employment.

Final results showed that women raised by employed moms are 1.21 times more likely to be employed; 1.29 times more likely to supervise others at their work, and spend 44 extra minutes at their jobs each year. Interestingly studies also show employed daughter of employee moms earned an average of $1,880 more per year than employed daughters who had stay-at-home mothers, full-time.

?Having an employed mom makes daughters think that employment is compatible with parenting,? McGinn says. ?If you?re actually observing an employed mom manage a complex life and handle multiple demands?a job, a family, a household?you see that it can work. Everything we know about role models and social learning suggests that children are actively picking up life skills from the adults around them. It?s all about what they?re exposed to as children.?

When it came to men, the study showed how their careers were not influenced by whether their mothers worked or not, rather they were influenced in the family life aspect by spending 50 minutes each week caring for family members. It may not affect a son?s employment choices, due to men occupations and earnings mapping closely to their father’s employment. There is a well-documented sex difference in the study, where researchers found that when it comes to shaping people’s mindset about appropriate roles for men or women, men will usually comply with their father in that aspect.

Obviously, I'm happy to see this! I think many other moms will be too. There are benefits to being raised by a working mom, according to a new study from @Harvard – https://t.co/0YGDB9F0RU @CBSThisMorning #parenting #workingmom @WTKR3 pic.twitter.com/TxaVVao0cF

Overall, it’s safe to say the findings of the study are proving a counterpoint to personal beliefs and rejoice that women who are working, don?t necessarily need to feel that “mom guilt”, worried they are affecting their family. It?s clearly shown how children and teenagers who have working moms, turn out, well, fine.

Watch: ‘Healthy Foods’ You Should Avoid