The World’s Largest Laundromat Is in Berwyn, IL 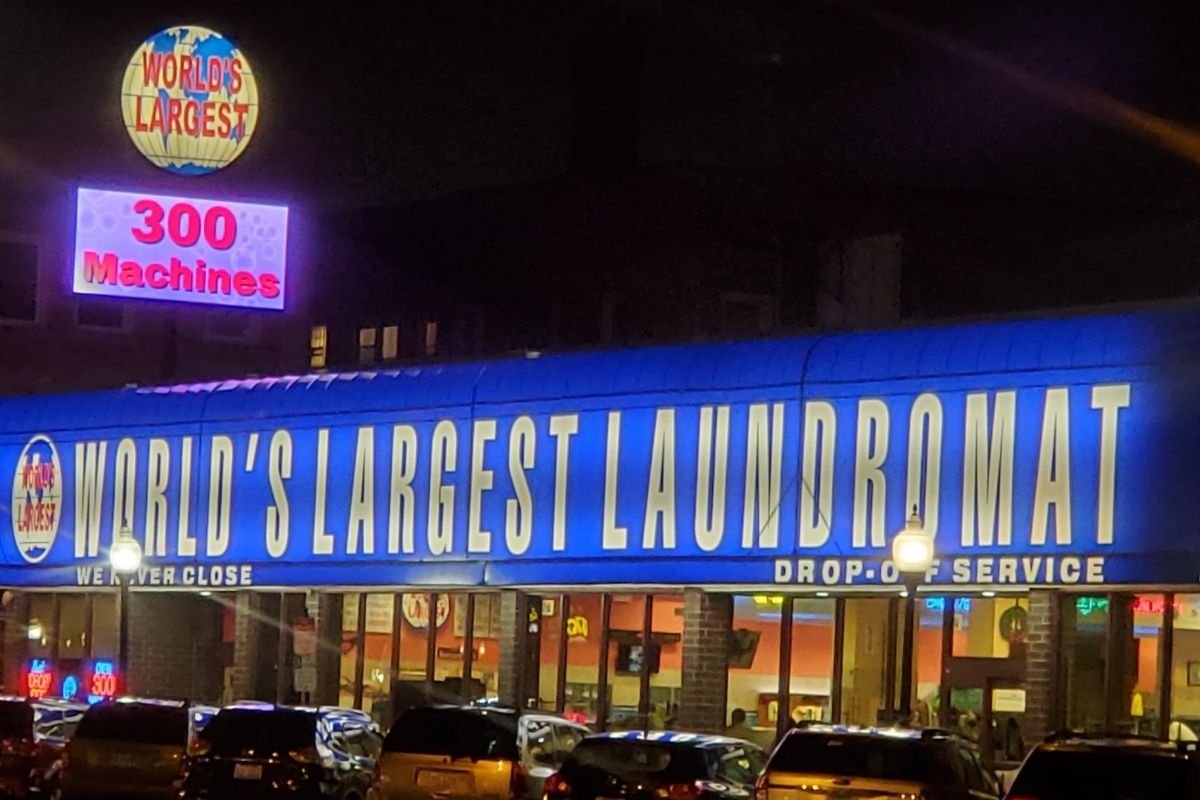 Ever get to the laundry room of your apartment and all the machines are full? Ever feel crowded or uncomfortable in the laundromat down the street? Well at World’s Largest Laundromat, you’ll never be rushed. In Berwyn, Illinois — just outside the Chicago city limits — there is a laundry oasis with more than 300 washing machines, 24-hour service, and even an indoor bird sanctuary.

More Than Just a Laundromat

The World’s Largest Laundromat in Berywn, Illinois lives up to its confident name. (The establishment was rated #1 by the United States Coin Laundry Aasociation in 1983.) Its 304 washers are powered by 36 roof solar panels, as owner Tom Benson has made an effort to get green. And that commitment goes beyond the washers: at World’s Largest Laundromat, the walls are covered in mirrors to reflect light and cut down on light bulb use. It also makes for some cool photos. (See below.)

The World’s Largest Laundromat is 13,500 square feet of pure experience. At typical dingy laundromats, there’s nothing to do but stare at your own spinning loads of dirty clothes. But this Berwyn spot has a play area for the kids, arcade video games, flat-screen TVs, free wifi, and even a small aviary that’s home to an adorable family finches. Look how poofy they are!

The Pride of Berwyn

Berwyn, Illinoisis technically a suburban city that neighbors Chicago, just west of the border. It has the highest population density of any township in Illinois. Berwyn, and the nearby Cicero, are the only Illinois townships population density higher than that of the city of Chicago. As such, the residential area is very ethnically diverse. The Encyclopedia of Chicago calls it “a solidly middle-class bedroom community.” And that homeyness is reflected in the atmosphere of the World’s Largest Laundromat, which remains one of the quiet area’s biggest attractions.

When I visited the World’s Largest Laundromat during the cold Thanksgiving weekend, it was mid-pandemic. But masked spirits were high in the establishment. Families bustled in and out, doing their laundry and enjoying the free coffee and free donuts which are always available. Seeing kids clamor around plastic play equipment and wait in line for arcade games, I could see it was the type of chore excursion which they were happy to accompany mom and dad on. The World’s Largest Laundromat staff was also pleasant, greeting customers gladly as they filled recycled bottles with the store’s signature Gigi detergent.

As a flagship store of the industry, it’s clear that the World’s Largest Laundromat understands their role in the community. They sponsor Berwyn’s annual Independence Day fireworks display and a summer reading program for local students. On Wednesday nights, the laundromat even offers free pizza to customers — and it’s delicious Chicago tavern style pizza. (Tavern stye is cut into squares — NOT deep dish!)

Any laundromat has the potential be a special gathering place. By offering a service so often done in the comfort of our own home, laundromats are the site of a quite intimate errand. They welcome all walks of life. And yet feeling relaxed while doing your laundry in public can seem like a paradox. But not at the World’s Largest Laundromat. Open 365 days a year, 24 hours a day, no one with something to clean is ever turned away. Owner Tom Benson, speaking to The Distance, even revealed that he doesn’t know how to lock the building! He said: “I don’t have a key. There is no key! Everything’s automatic doors, and they’re always on.” I think that’s a fitting metaphor for this unique Chicagoland mainstay.

WATCH: This Ghost Town is a Moment Frozen in Time