Tuesday was another weird live show. There weren’t technical difficulties like during the second live show, but it was an uneven affair that featured more annoying bickering between Simon Cowell and Mel B.  Thankfully Howie Mandel,  Heidi Klum and Tyra Banks have stayed above whatever’s going on. Whatever. Wednesday featured the final acts that would go through to the semi-finals, and as usual, there was an audience save. While some acts seems like shoo-ins — how could Kechi NOT get through? — you never know.  The Dunkin Saves acts tonight — the magician Colin Cloud, the gospel group Danell Daymon & Greater Works (WHAT???), and young singer Angelina Green. Who was saved? Who went through? Who went home? Let’s find out:

When we first saw the sibling salsa duo, they performed a spicy number with so many spins it felt like the room was moving. So, of course, they did a number with even more spins during their second appearance, and my head hurt just from watching this.For the live show, the tremendous salsa dancers showed that if they don’t win this competition, they have a future on  Dancing with the Stars.

Music is all they do, because they want to chase their dream. So the guys from Atlanta did It’s a Man’s World, Somewhere Only We Know which fell a little flat.  So did their version of Ed Sheeran’s Shape of You, which got a lukewarm response for judges. That tends to be the kiss of death. It was. The didn’t get through.

Hernandez, a big guy, wanted to be an entertainer, but his father pushed him into sports. He tried to satisfy him by trying to play football, but that wasn’t his passion. So the first time we saw Oscar, he broke out some wild dance moves to Anaconda, and the crowd went wild. He then did “Bang, Bang,” and once again, he jumped, split and moved like a nimble ballerina. For the live show, the big man strutted his stuff again, and it’s hard to believe a guy that big is that smooth. Even Simon was standing and clapping.

The 13-year-old singer has been tormented by the pain of a father who left and never came back. She told the tale of her mother calling homeless shelters in case they needed a place to stay, and in her first performance she belted out I’ll Stand by You by The Pretenders for her mom. She got a Golden Buzzer, so she moved through to the live rounds. She did ….. and from the first note she had the crowd cheering. There are tremendous singers left in this performance, but her range and tone is special, even though she was clearly nervous. “You just have an amazing voice,” Simon said, and that’s the best way to put it. But it shows how tough  the competition is, because she didn’t get through.

Oskar and Gasper, the story goes, have rarely been seen in public, and are the inspiration for the show. Whatever, their digital art is breathtaking. Whether it’s transforming Heidi Klum into all sorts of things using lights, flashes, and all sorts of cool stuff,  or having two of their troupe on stage with  lights flashing on their body, the originality is tremendous. Heidi though the pace was a little slow, and negative comments can influence the vote. That appears to be the case because they didn’t get through.

Sarah and her dog, Hero

How often is it you see Simon the softie? That’s what we saw during the audition round when Sarah and her five-year-dog, Hero, took the stage. When her performance was over — one that featured the shy Sarah in some sort of medevial costume with a sword doing tricks with her dog — only Simon was impressed. During her second performance, Sara and Hero were a TON better. During the live show, she brought another dog along, Loki, and had an Egyptian Pyramid theme. She’s another performer who has an amazing story — living in tough conditions to make her dream of performing for a living come through — but unfortunately, it wasn’t enough.

It’s tough on musicians on these shows. You have to separate yourself and be really original. Chase Goehring, a 21-year-old singer/songwriter from a small town in Tennessee, blew originality out of the water. The guitarist performed a song he wrote, “Hurt,” about a girl in a bad relationship he wishes was with him.  That gave him a Golden Buzzer, and this time, he sang another original song called, Illusion. Give it to him. He’s original. Mel B. called him brilliant but Heidi said it wasn’t her favorite. 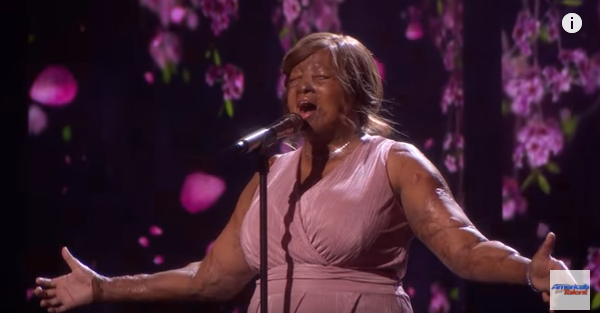