I don’t have any idea how the voters were going to select only five acts to make it to next week’s finals. There were so many good acts last night, and Simon Cowell and the gang — Howie Mandel, Mel B., Heidi Klum and host Tyra Banks — seemed to recognize that. The singers dominated, but there aren’t enough spots to get them all through.

Let’s see who made it to next week’s finals.

Already in the AGT Finals

Who can vote against cute as a button little 9-year-old girl with the face of an angel?  So far, she’s wowed with performances of  “My Heart Will Go On” and then, How Am I Supposed to Live Without You and When You Believe. And here she is, with a chance to go to the finals, and in an effort to get there, she did How far it goes         from the move Moana. It fit her perfectly, and she opened the final AGT semi-final in blow you away fashion, so much so that she had the crowd cheering early on. Simon acted like a conductor, moving his hands to the music. The judges clapped. Damn she’s good. “This was a massive, massive step up. The song was perfect for you,” Simon said. Mel B. said it was way too musical theater, and she got hammered by the crowd — and Simon. America didn’t tune out Mel B. though, and the precious little girl with the huge voice didn’t get through.

Magic done right is amazing. The best tricks start with a simple premise that contains a twist that blows away the audience. That’s what Colin Cloud did in his initial appearance. He took a simple premise — a coin trick — and turned it on its head.  During the live show, he promised his most impressive performance yet. It was long winded and confusing, and he made it through anyway. But this time he did a mind-blowing trick in which was able to predict the judges would select three words — a week before they did. “I’ve got goosebumps, on my goosebumps, on my goosebumps,” Simon said. But for him, the magic ended Wednesday night, when he wasn’t voted through.

At six-months-old, Christian’s parents learned he would go completely blind. When he was 12, they found an experimental gene therapy that worked and helped him regain his site, and now his dream is to became a singer. From his initial appearance on AGT,  you could tell that the now 16-year-old was going to be something special. Howeie gave him a Golden Buzzer after he killed Who’s Loving You. His rendition of Make it Rain, had the judges standing at the end. “I am so proud, I’m bursting with emotion,” Howie said. “In one word, you’re magic.” In the AGT semi-finals he really stretched, trying the Marvin Gaye classic, What’s going on. His slower, almost ballad like performance showcased his style and range, and it earned a standing ovation from the judges. Unfortunately, it din’t earn a standing ovation from America, and he didn’t make it through.

In the Stairwell, A-Capella group

The A-capella group, In the Stairwell, “bored” Howie the first time they performed, but during the judge cuts, they did a terrific version of “Bye. Bye, Bye” had the crowd in it from the beginning.  You have to root for a group of men who are prepared to give their lives for the country and note how willingly they’d do it. “We are military and we’re being trained to be leaders, and music is a way to have fun together.”  During the live performance they did What Do I Stand For with a military bent, saluting in their camouflage. “Your harmonies as so yummy,” Mel B. cooed. So for the AGT semi-finals, in their perfect dress blues, they did, “Castle on the hill,” and it was their best performance of the show. Another standing ovation from the judges. And, this one hurt, because they didn’t make it through.

Merrick Hanna, the  tremendous 12-year-old, tells stories through  dance. First, he was a broken, floppy robot through dance. His second interpretive dance had the crowd cheering early on.  For the live show, he did a dance about a boy without a family. Mel B. called him “mesmerizing;” Simon has been a supporter from the start and said, “You’ve got originality.” For the AGT semi-finals, he took his act to the next level, bringing a robot on stage and flying through the air. As good as he was, he’s facing a lot of competition to get through. Again, optics matter. The judges didn’t rave nearly as much, and the voters notice things like that. And they sure did. Merrick didn’t get through.

The judges had a chance to bring back one act who was voted off. So here comes the Pompeyo family — mom Natalia, daughter Katerina and husband/dad George —  love their dogs. All 18 of them. The family has a dream of having its own Las Vegas show, and they don’t seem that far off, with a dog that can do a handstand, balance on someone’s hand, or walk on their front legs. The dogs also jumped rope, jumped through a hula hoop — all sorts of stuff. They brought the dogs back again during the AGT semi-finals, this time with some sort of Alaska theme with a dog dressed as a penguin(?).  They are good … but with Sara and Hero through to the finals, will America vote for another dog act? Besides, Mel B. looked bored out her mind and the judge’s feedback was as cold as the set. America has a similar reaction, and the Pompeyo family didn’t make it to the finals. 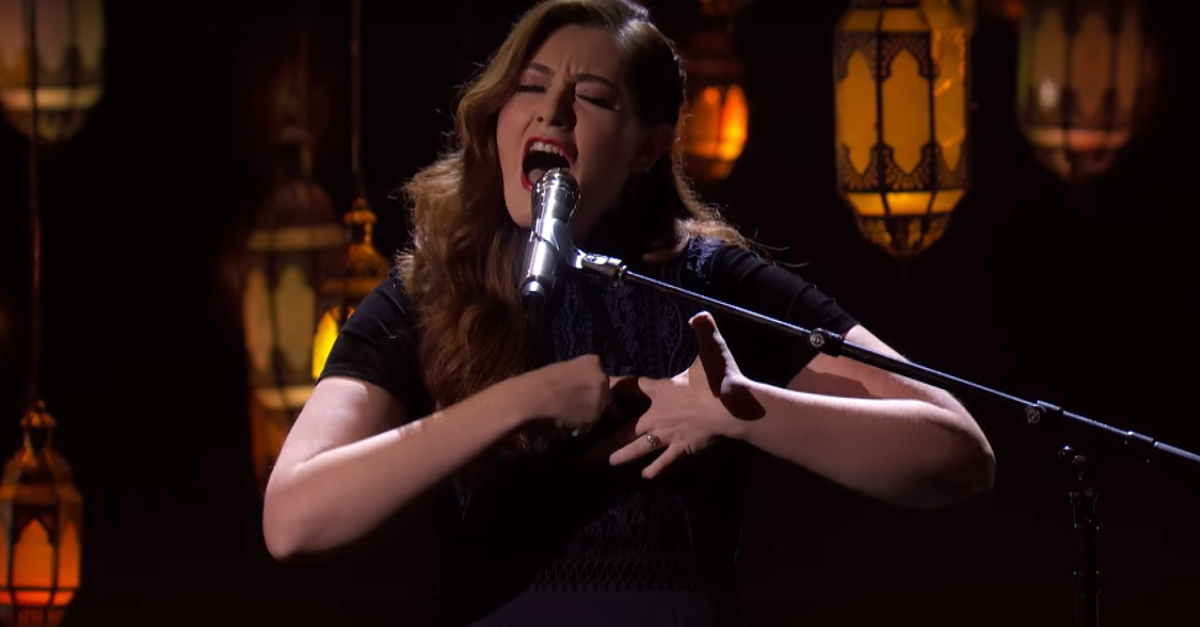