Britney Spears has been in the public spotlight since she was a young lady. Now, at 40, she is taking a break from social media.

The mom — and pop star — revealed in an Instagram post on Sunday that she will be stepping back “for a little while” from the platforms.

Spears has been a content queen for her 40.9 million Instagram followers, but she hasn’t posted on Twitter since January, so it really is going to be a massive drop of selfies and other updates.

For his side, Ed O’Neill has been a star for years. Did you know he was almost a professional football player? Here are a few things you may not know him, and also refreshing the details on that situation with Brit.

When Ed O’Neill was young, he was big into sports. He was an athlete before becoming an actor. He attended Ohio University on a football scholarship. In 1969 O’Neill was drafted to play for the Pittsburgh Steelers but didn’t make it past camp. Afterward, he went back to school and ended up playing a failed football player in his first gig. It seems a little pointed, but it was his shooting star into his Hollywood career. Mr. O’Neill is married to actress Catherine Rusoff, and the two have two children. Both daughters, Sophia and Claire.

Ed O’Neill has made his debut in Youngstown, Ohio, on the stage. He landed the “Married with Children” sitcom gig, portraying as Al Bundy, in the spring of 1987 and did that for 10 years. After Married with Children, he starred in shows and was in the reboot of ABC’s Dragnet. Some of those were Wayne’s World, The Bone Collector, Sun Dogs, Finding Dory, and Wreck-it Ralph. The Modern Family star has been awarded 3 Primetime Emmy Awards and multiple Screen Actors Guild awards for his role of Jay Pritchett. He has done so well in a career he didn’t know he was going to get into. He and his family have a gorgeous $6.25 million vacation home on the island of Kailua-Kona, Hawaii because of his acting roles.

Ed O’Neill was at LAX in 2010 waiting, as one does, to board a flight. The way he tells it, a nice young woman came over and told him he was a huge fan of his tv show, Modern Family, and asked for a photo. It turns out it was Britney Spears, and she definitely tweeted the photo with the caption, “Fancy running into this guy! Such a sweetheart!!” I bet he didn’t think that his “Yeah, I guess you can have a picture, sweetie” photo would end up trending because he’d be posted on social media with a pop superstar. His manager texts him about the pic the next day and quickly asked for the 411. His people called her people, and you know, apologized for not recognizing one of the hottest stars. Even Ed’s teenage daughter gave him the side-eye for the snafu. At least she called him a “sweetheart.” It wasn’t personal, though. He apparently doesn’t recognize pop stars. He did the same thing with Taylor Swift sometime later. He talked about the Britney Spears situation when he went on The Ellen Degeneres Show. Watch it Here! 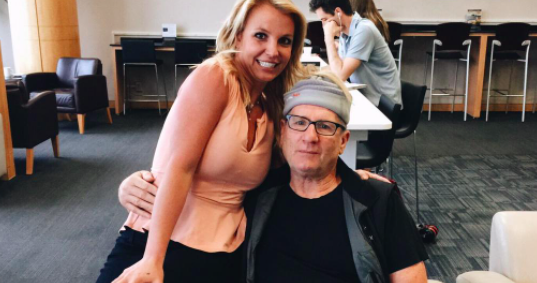