Calling all Bud Light and Mexico Soccer fan’s in California, this one is for you! Bud Light is at it again with the free beer! Yes, you read correctly, F-R-E-E.

To celebrate the World Cup in Russia, the company had decided to give fans a special cold treat. As Mexico advanced to the 16th round, it is close to making it to the 5th game. This is a major headline because it hasn’t been done for the past six World Cups.

What does that mean? Well, Bud Light has announced that if Mexico indeed makes it to the 5th game, it will give fans in California free beer!

On Twitter, the company released a witty video, and a statement in what seems to be an “official” renaissance document (5 points for the awesome marking team) stating, “It is announced that should Mexico advance to the Quarter finals, such a great victory shall be celebrated…”

This is not the first time Bud Light pops us on the headlines for making a similar promise. Back in 2017, Philadelphia Eagles offensive lineman Lane Johnson promised NFL Fans he would give beer to “everybody” in Philadelphia if the team won a Super Bowl.

Bud light agreed with Johnson, making a bet with the football star, in which they then paid forward after The Eagles won the Super Bowl LII. The company went on to change their famous ‘Dilly Dilly’ catchphrase to ‘Philly Philly’ to celebrate the Eagles’ win and invited all fans (of legal drinking age, of course) to one beer. Several Bud Light Representatives were scattered along 25 bars that followed the parade route.

The @Eagles of Philadelphia have emerged victorious! Join us with @LaneJohnson65 and your 21+ friends at taverns along the parade route to raise one of the Kingdom’s favorite light lagers. #PhillyPhilly 🍻 #DillyDilly pic.twitter.com/30ptis8xIC

Details as to how to get free beer have not yet been released, but will once Mexico advances. We should probably all start to cross our fingers!

Here we go, Mexico fans, this is your chance! Budweiser, it’s your move!

Read More: Houston throws its hat into the host-city ring for the 2026 World Cup — but it’s not the only Texas city 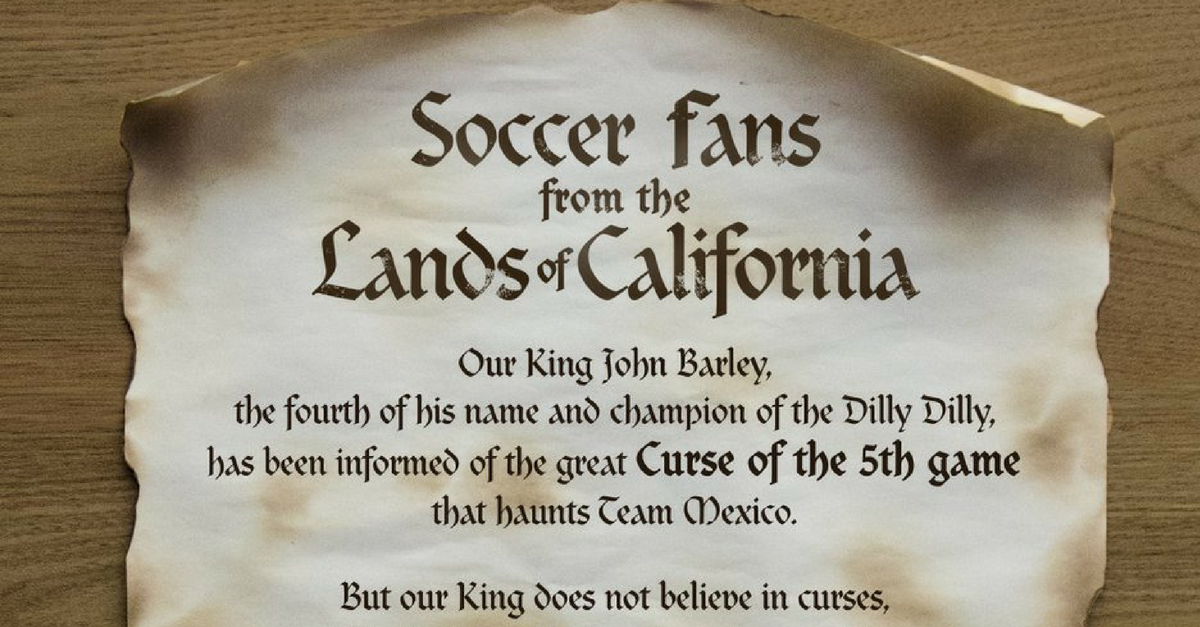