It looks like Kid Rock is out here being, well, Kid Rock. The Detroit born musician decided to revamp his home decor and surprise Nashville residents with a gigantic 700-pound middle finger statue. Yes, the rocker, who is known to do crazy stuff like this, decided to stir the pot and be the talk of the town. Which is actually a great way to promote himself, if you ask me.

Why the real-life middle finger statue? Well, Rock is pretty much known for flipping the bird, it’s even graced one of his CD covers. So yeah, it’s an instant habit for him and what Kid Rock requests Kid Rock gets. The middle finger sculpture actually roots back to November 2018 and was created by small business owner Ted Pelkey, a Vermont man from Westford. The idea came to him after he was trying to find the best way to cut down his expenses while keeping his business alive.

Basically the conversation this AM:
Me: Hey Ted, someone said you might be putting up a second statue.
Ted: There is another one.
Me: What's it for?
Ted: It's for @KidRock.
Me: … Come again?
Ted: It's for Kid Rock.
Me: Wait… what?

He decided he wanted to move from a shop he rents about 25 miles away. His idea was to build a new shop on his own property and work from there. But unfortunately, Westford told him no, so basically Pelkey responded the only way he could. By creating a flipping the bird statue.

So, not only did this genius artist built a gigantic seven-foot-tall statue of a hand giving the middle finger, but he mounted it on a 14-foot-tall pole on his property and even installed lights on it so it’s visible at night. Talk about sending a subtle message. The giant middle finger, which he says is for the people who run the town of Westford, has become quite a well-known tourist attraction for those traveling through on Route 128 and has gained national media attention.

This is where Kid Rock and his middle finger obsession comes in. During Christmas, Pelkey said that Kid Rock had left him a message, saying, “Hey Ted, Merry Christmas. It’s Bob Ritchie, Kid Rock.” The southern rockstar then told Pelkey that he liked the statue and had to have a finger on his property in Nashville. So, the Vermont artist quickly began to work on a second middle finger and is now ready to be shipped all the way to Nashville.

The second “Big Bird” is said to be delivered to Kid Rock in May, and boy, I can already see all the pictures going viral. Of course, this is something Kid Rock would do, it’s in his nature. Regular statues are so overrated.

Editor’s note: This article was originally published on April 29, 2019.

Watch: Alec Baldwin Fell for a Tourist Ticket Scam, Celebs Are Just Like Us 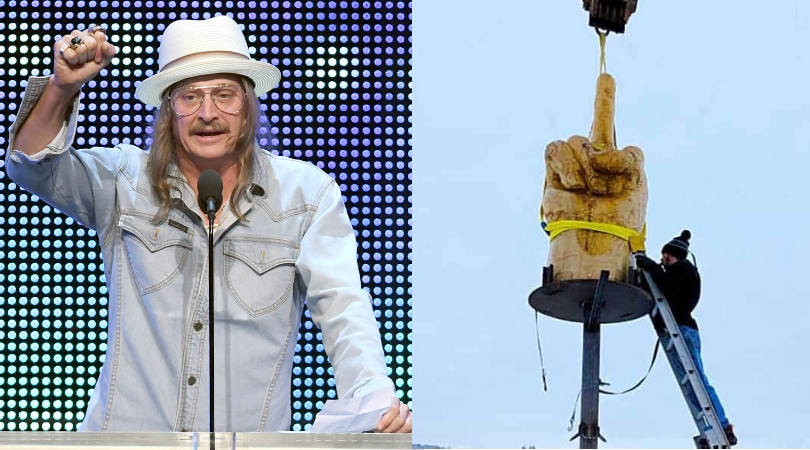