Menu
Follow us
Search
Menu
Search
"Kevin Richardson takes Lions, Gabby and Bobcat out for a lion walk and the volunteers tag along as well. Please SUBSCRIBE, comment, like and share to help #SaveLions Watch Kevin's Cause video here: http://www.youtube.com/watch?v=EzT2sO... It's an enrichment walk for both the volunteers and the lions as Kevin shows off his lovely lions as well as giving some amazing lion facts to the volunteers. Website: http://www.lionwhisperer.co.za Twitter: https://twitter.com/lionwhispererSA Facebook: https://www.facebook.com/LionWhispererSA Instagram: http://instagram.com/lionwhisperersa The Kevin Richardson Wildlife Sanctuary's mission is to provide a self-sustaining African carnivore sanctuary for the purposes of wild species preservation through education, awareness and funding, especially pertaining to the rapid decline of large carnivores in Africa due to habitat loss, human-predator conflict, unscrupulous hunting, disease and their illegal trade. To raise awareness, Kevin has now set up his YouTube Channel 'LionWhispererTV'. The channel is all about raising awareness about not only the declining numbers of lions, but also how this rapid decrease is happening. By watching these videos, you are directly contributing to our scheme of land acquisition. Kevin captures the majority of his footage on GoPro cameras, allowing the viewer to get as close as possible to the lions. By doing this, Kevin hopes to give people an insight into the lives of these beautiful creatures and to let them see just what they can do to help. You can nearly touch them."

The Kevin Richardson Wildlife Sanctuary has one goal: to protect Africa’s apex predator, the king (and queen) of the jungle.

Richardson, known as “The Lion Whisperer,” provides education and awareness, encouraging both his volunteers and his thousands of YouTube subscribers to preserve the wild species.

RELATED: He reached out and somehow mastered the art of lion hugging — but don’t try this at home

During his “volunteer enrichment and lion enrichment” walk, Richardson grazed the savannas of South Africa with male lion Bobcat and female lion Gabby. Both lions are incredibly “affectionate,” according to him.

Despite the beautiful lion hugging session between man and beast, the volunteers remained in the truck, filming nearly five to seven feet above the potentially fatal interactions. 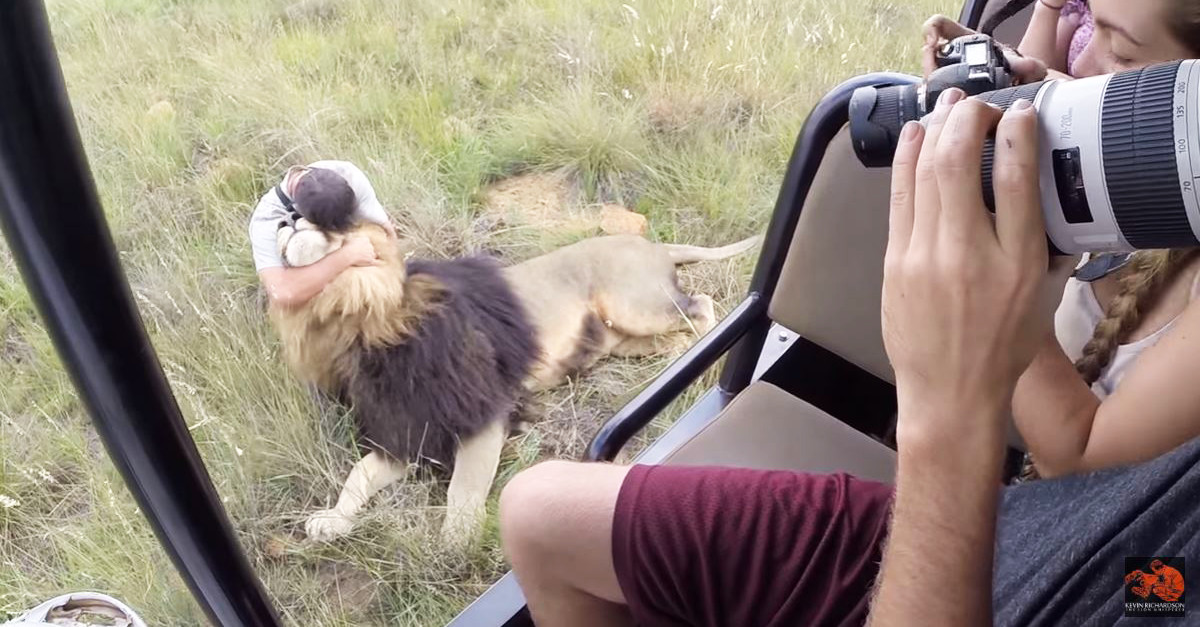