Listen up, breweries, I need you all to do this from now on! Have you ever gone to grab a beer with your friends and then out of nowhere a dog pops up and you automatically fall in love with them? Well, what if I told you that now that dog could be on your beer can. Yes, Fargo Brewing Company in North Dakota has teamed up with 4 Luv of Dog Rescue to showcase some of the nonprofit’s hardest to adopt dogs, by putting their cute headshots in front and center on limited-edition six-packs. Because we all know that the best way to sell something is by putting it on a beer can.

Fargo Brewing hosted their “4 Luv of Dog ‘Oneder Dog’ Beer Release,” to show off pups who have trouble socializing with other pets. According to the animal shelter, finding a home for these dogs can be difficult in part because there aren’t able to go out to adoption events. So, to help them get in front of people, the brewing company created a special run of their own award-winning Fargo Original Larger, which is packaged in six-packs and each can had a picture of a different dog. The community could buy a six-pack for $9 and meet one of the dogs up for adoption.

This is a great idea, now we need to put shelter dogs on other promotion products. Thank you Brewery company for caring. https://t.co/NbwIxCzVhc #adoptdontshop #shelterdogs #shelterpets

According to Jerad Ryan, who is a volunteer with 4 Luv of Dog Rescue, “The harder-to-adopt dogs sometimes labeled as ‘Oneder dogs’ have always had a special place in my heart. My first three-and-a-half years volunteering at the shelter I would spend extra time with the dogs that had been there long-term mostly due to the fact they don’t do well living with any other dogs. Many of our foster homes already have a resident dog or two [so] it is difficult to find these particular dogs a forever home.”

Ryan works full time with Northern Plains Labels, which is a company that produces beer labels. When he came up with the idea, he approached his boss about donating labels to the brewery. Seeing how good of an opportunity it was for both of the companies, the brewery accepted, and all dogs were all photographed individually. The six chosen dogs featured on the beer cans were Bizzy, Nyx, Jensen, Hobie, Virginia, and Moby.

According to the brewery’s social media and marketing manager, they had a total of 40 cases made with the special labels and were able to sell 25. But, don’t worry, if you’re in North Dakota, you can still go to the brewery through the end of the week and buy some. So, if you think about it, this is a genius idea. I mean, dogs are always at breweries. Heck I was just at one this weekend and there was another fundraiser for dogs, so if you can use events like these to showcase pooches who need homes, then why not? Beer and puppies? Yes, please! 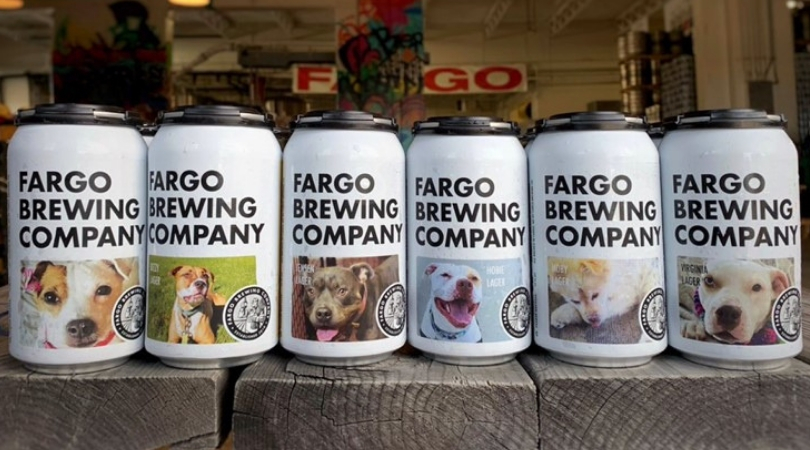