Menu
Follow us
Search
Menu
Search
"*****FUGITIVE K9 CAPTURED***** On 07/11/2016 officers of TSPD captured Willow who had wandered away from home in Tarpon Springs. Willow refused to tell officers where she lived so she was taken to the PD where she was booked and photographed. She was very cooperative with officers and probably one of the most friendly prisoners we've ever had in custody. Just a little short for her booking photo so she needed assistance getting to the right height. Luckily, the owners of Willow were located and they came and bonded her out and she is home safe and sound now. Good job TSPD!"

A dog had her mugshot picture taken after being turned into the Tarpon Springs Police Department without any tags.

Upon posting the dog’s mugshot to Facebook, the TPSD included the description “FUGITIVE K9 CAPTURED.”

“Willow refused to tell officers where she lived so she was taken to the PD where she was booked and photographed,” the TSPD wrote on Facebook.

Willow the female dog was found in a residential neighborhood in Tarpon Springs when locals contacted the police department’s non-emergency line to help the dog find its owner.

RELATED: Mischievous dog gets on his hind legs and rummages through the fridge, looking for a snack

An officer then located Willow and put her in the back of his patrol car to take her to the station.

Willow was forced to follow standard protocol and even have her paw prints taken. She was too short to stand on her own in the mugshot, so, a police department employee hoisted her up so she could fit in the frame.

Police dispatcher Juanita O’Harra shared the image of Willow to her personal Facebook page. One of her “friends” commented, asking if the dog was deaf.

RELATED: The footage of a man rescuing a dog from a frozen lake will restore your faith in humanity

“It made sense because the dog didn’t respond to typical commands like ‘sit’ or a whistle,” said O’Harra.

After Willow spent more than two hours in police custody, an employee from a nearby rescue center “bonded her out” and brought her to her foster family. Willow is still looking for a forever home, O’Harra said.

“She was very cooperative with officers and probably one of the most friendly prisoners we’ve ever had in custody,” the TSPD said of Willow.

O’Harra believed posting Willow’s mugshot to Facebook “would be a smile to people’s faces” during an “intense” and turbulent time for police officers across the nation. 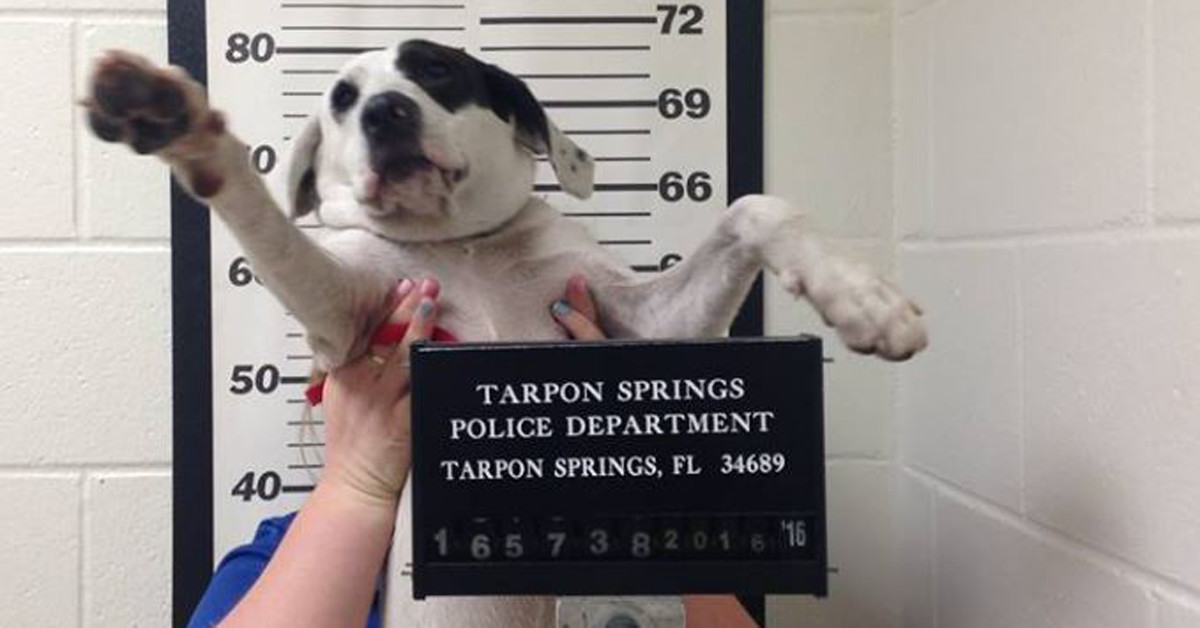