A harrowing lion attack was caught on video at a zoo and we’re posting it here as a reminder to all human beings that you should not try to mess with zoo animals. Especially animals that can accomplish a pretty solid mauling with just a flick of their wrist. Like, for example, a lion.

The animal attack video in question shows a man walk right up to the pretty much literal lion’s den and proceed to tease a male lion. The video picks up with this Darwinian idiocy in progress and the lion already looks pretty pissed off.

You Can Take the Lion Out of the Jungle, But…

As the video shows, the pissed off wild animal is in no mood to be teased by some d-bag hanging right outside the lion enclosure to get some cheap laughs. The lion probably barely tolerates the zookeepers leaving it meat. It wants to be out on in the wild, choosing which lioness it feels like mating with today.

So naturally — literally, naturally — the lion decides to inflict some severe injuries on the extremely deserving zoo visitor. It’s a miracle this guy walked away with his arm. Based on the video he didn’t even suffer any lacerations. He should be in critical condition with some tooth shaped neck injuries but not only is he in stable condition, but he also seems like he might be barely hurt? How does that happen?

Really how does any of this happen? How can you be that dumb? Is this guy walking into hospital Coronavirus pandemic wards and asking people to spit in his mouth just to get some lawlz? Getting COVID for the Gram?

You have to feel sorry for the zookeepers. That has to be one of the best jobs… until it’s one of the worst jobs. Right up until someone screams “GRAB THE TRANQ GUN” because an idiot stuck his hand in a cage and now you have to shoot an animal you’ve bonded with.

Not the First Time

This wasn’t the first time. It probably wasn’t even the hundredth time. According to CNN, last year a woman in Arizona made headlines when she got too close to a jaguar cage, allegedly to take a selfie. Though the story was trending because of the selfie accusation the woman denied that a photo with the big cat was why she crossed the barriers.

35-year-old woman Faye Stockmen was mauled by lions this summer at Shoalhaven Zoo in New South Wales, Australia, 100 miles south of Sydney. She was, however, not tempting the animals like these other two geniuses. 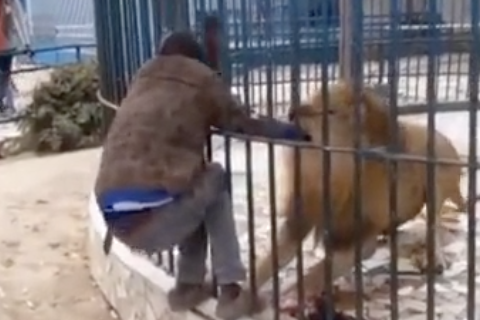