Tarantula hawks are reportedly on the rise.

RELATED: A supermarket chain in Switzerland is selling insect burgers made of mealworm larvae

And, if you live in Texas, wildlife experts agree, you should watch out for these next level wasps.

According to Wired, tarantula hawks’ population is increasing across the Lone Star State.

“The tarantula hawks are really bold in terms of wasps,” Ben Hutchins, with Texas Parks and Wildlife, said in an interview. “Researchers think that’s because they have very few natural predators. They have such an effective deterrent mechanism, and that’s their really painful sting.”

Their stings are reportedly so painful, entomologist Justin Schmidt, who created the Schmidt sting pain index and studies insects for a living, ranked the painful effects of a bite a four on a one to four scale.

Orkin, the pest control company, also rated their sting as one of the top-six most painful in the bug game.

As Wired explained, a tarantula hawk is a parasite that “attacks tarantulas, not humans, paralyzing them with a sting before dragging them into a den.”

RELATED: A 70-year-old woman and her dog were swarmed and stung in horrific insect attack

So, to sum things up, stay away from tarantulas hawks, although, researchers say only a misstep or foolishness of picking one up could harm Texans.

aside: tarantula hawks are GORGEOUS 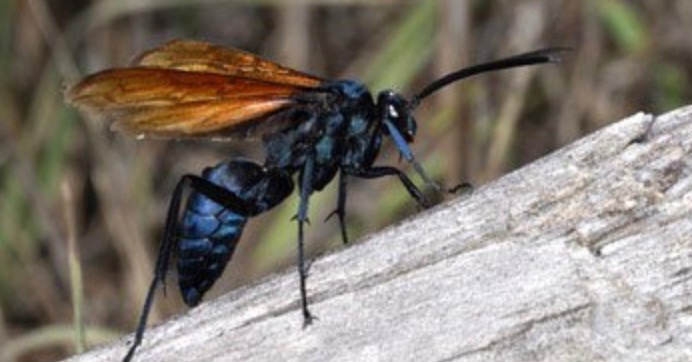