Okay, so Terms of Endearment might be one of the saddest movies of all time. (If you’ve never seen it, stop reading right now and WATCH IT. Spoilers ahead.) But it’s still excellent Mother’s Day viewing. So in honor of that special day, let’s remember this 1983 classic: from those fiery on-screen moments to behind-the-scenes feuds, and yes, even that devastating ending. Contemporary audiences might find Terms of Endearment a bit schlocky but when it comes to stories about the highs and lows of a mother-daughter relationship, this old-school tearjerker has it all.

Terms of Endearment, based on Larry McMurtry’s novel of the same name, follows a 30-year-span in the lives of two women: Aurora Greenway (played by Shirley MacLaine) and her daughter Emma (Debra Winger). Aurora is a repressed widow who channels all of her energy toward Emma; that overbearing pressure causes the free-spirited Emma to distance herself. She hastily marries her unmotivated boyfriend Flap Horton (Jeff Daniels) — a disappointment to Aurora — and the couple moves from their home in Houston to Iowa, and eventually Nebraska.

Over that period of time, Emma gives birth to three children and keeps in touch with her mother by phone. The pair remain close, despite Aurora’s distaste for Emma’s unexceptional life choices. Then, as Emma and Flap’s marriage begins to fall apart, Aurora takes up with her next-door neighbor, a seductive retired astronaut named Garrett Breedlove — played by none other than the wily Jack Nicholson.

But everything changes when Emma is diagnosed with terminal cancer. As she succumbs to the illness, she and her mother become closer than ever. It’s Aurora who takes over raising the children after Emma’s death, at which time Garrett commits, finally, to the new and unconventional family.

Terms of Endearment was written, directed, and produced by James L. Brooks. It was a large project for the famed TV producer, who’d only directed one movie prior. (Terms was technically his first feature film.) But Brooks led an impressive cast which included Debra Winger, Shirley MacLaine, Jack Nicholson, Danny DeVito, Jeff Daniels, John Lithgow, Troy Bishop, Huckleberry Fox, and Lisa Hart Carroll. The film premiered in limited theaters on November 23, 1983, before a larger, second release date was organized by Paramount Pictures for December 9, 1983. At that time, Terms of Endearment became an instant box office success, grossing $165 million to become the second-highest-earning movie that year. That’s not just impressive, but downright surprising, for a female-centered melodrama.

“The most remarkable achievement of “Terms of Endearment,” which is filled with great achievements, is its ability to find the balance between the funny and the sad, between moments of deep truth and other moments of high ridiculousness. A lesser movie would have had trouble moving between the extremes that are visited by this film, but because “Terms of Endearment” understands its characters and loves them, we never have a moment’s doubt: What happens next is supposed to happen. Because life’s like that.”

“You Do Bring Out the Devil In Me”

Terms of Endearment swept at the Oscars in 1984. The film earned eleven nominations and won five — most of any movie that year. Brooks won for Best Director and Best Adapted Screenplay, MacLaine for Best Actress (she was pitted against her co-star Winger), and Nicholson for Best Supporting Actor. The movie also took home the coveted Best Picture prize.

Nasty rumors about an ongoing feud between the lead actresses Debra Winger and Shirley MacLaine. Since the relationship between their characters was also so acrimonious, this fight has fascinated Hollywood for over 35 years… and even affects the way many fans watch the movie. Apparently, the two actresses got off on the wrong foot from day 1. In a 1984 interview with People Magazine, MacLaine insisted that she had never heard of Winger before — despite the young star’s meteoric rise after Urban Cowboy. At their first meeting, MacLaine donned a fancy fur coat while Winger showed up in a mini skirt and combat boots — the veteran actress was not impressed.

In her 1995 autobiography, My Lucky Stars, MacLaine opened up about the harsh dynamics, writing that Winger once “turned around, walked away from me, lifted her skirt slightly, looked over her shoulder, bent over, and farted in my face.”

Like her character Emma, Winger’s on-set behavior sounds provocative, to say the least. On Watch What Happens Live with Andy Cohen in 2018, Winger confirmed that there was “something true in there” when Cohen asked her whether she indeed tried to “pass gas” in MacLaine’s direction or licked MacLaine’s leg while she was filming a love scene.

Famously, in her 1984 Oscars acceptance speech, MacLaine said “I deserve this.” The pointed moment came off like an obvious dig, considering her co-star had been nominated in the same category. (Though MacLaine did thank Winger in her speech for her “brilliant turbulence” and joked that throughout filming it felt like she truly had another daughter. We can see why.)

We may never know the dirtiest details of the famous feud. But regardless, most people would agree that the tense rivalry between Winger and MacLaine improved the film’s final product. Presumably, MacLaine and Winger’s performances were imbued with human emotion that was messy and real. Nicholson said it best when he opened up to People on the topic, briefly, in 1984: “If things become nutsy, you almost hate to say it, but it is a barometer of the vitality of the production.” Nutsy!

Prior to directing (and writing and producing) Terms of Endearment, James L. Brooks co-created The Mary Tyler Moore with Allan Burns in 1970. Books had a fruitful career in TV production before entering the movies.

The Role of Garret Breedlove Was Meant for Burt Reynolds

Brooks specifically wrote the womanizing character of Garrett Breedlove with Burt Reynolds in mind. But the actor had already committed to Stroker Ace. He later called the decision to skip out on Terms idiotic. And that’s not the only time Reynolds lost out on a major role.

While filming in the state capitol of Lincoln, Nebraska, Winger met then-governor Bob Kerrey… and they dated for two years!

During the iconic beach scene of Terms of Endearment, MacLaine revealed that Nicholson — a noted method actor — supposedly improvised the moment when he stuck his hand down her dress. Why am I not surprised?

James L. Brooks directed Jack Nicholson Again — in ‘As Good as It Gets’

Jack Nicholson reunited with director James L. Brooks for the beloved 1997 rom-com As Good As It Gets.

A sequel to Terms of Endearment, The Evening Star, was released in 1996. Shirley MacLaine is the main returning actor, reprising her role as Aurora Greenway as the story focuses on Aurora’s relationship with her three grown grandchildren — one of whom is portrayed by Juliette Lewis. But the film bombed, with poor box office numbers and abysmal critical reviews.

“Because everybody has a mother.”

Speaking with People Magazine prior to the 1984 Oscars, Shirley MacLaine so rightly captured not only why Terms of Endearment is great, but why she (and not Winger) would likely take home the award for Best Actress. Those five simple words: “Because everybody has a mother.”

Terms of Endearment is available to rent now, on Amazon Prime. Consider enjoying it this year on Mother’s Day. 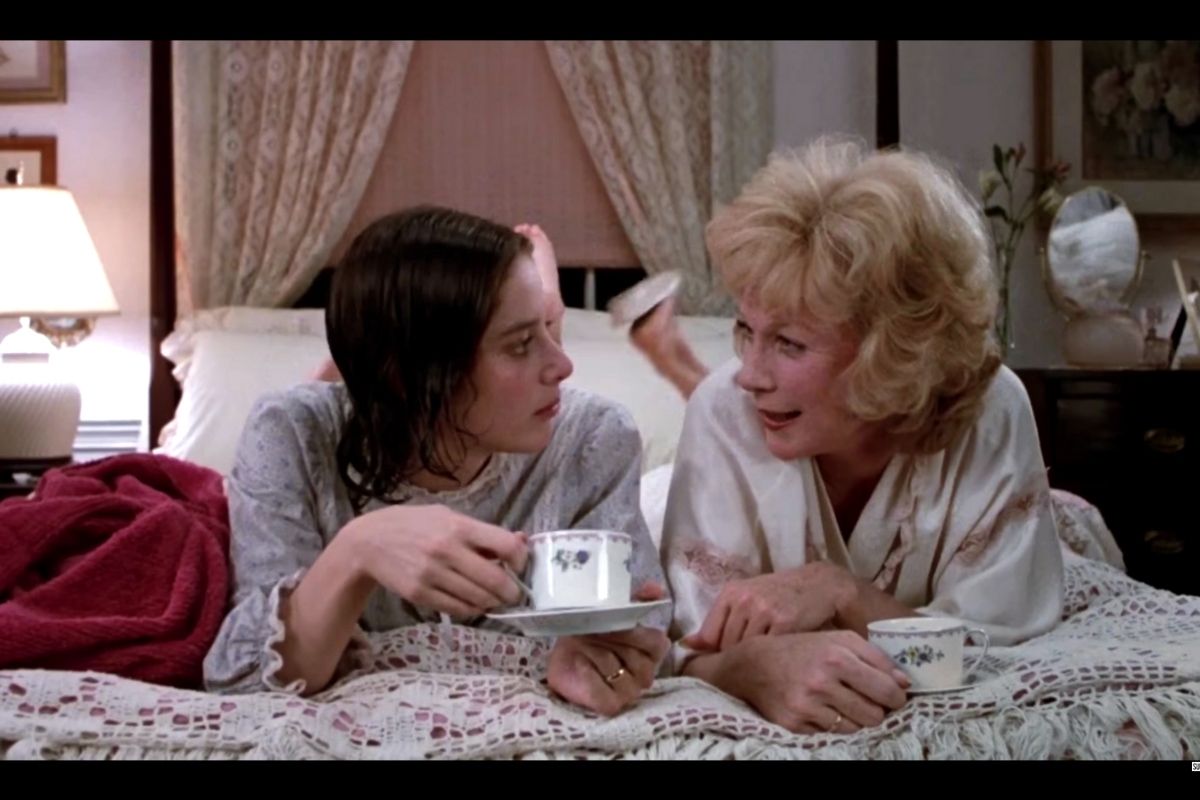