Take a passing glance at the names on any comedy club lineup — on any given night, anywhere in the country — and you’re likely to see the names of more female comedians than ever before.

That’s a testament to innumerable female comedians who, throughout the 20th century, wanted to pursue stand-up comedy — but couldn’t. It took decades and decades of female comedians challenging the comedy world’s fealty to traditional family values.

A woman’s place is in the kitchen. Women should never discuss controversial subject matter or make blue jokes, lest they be deemed impolite or improper. That mindset dominated the comedy industry from time immemorial.

It took brave female comedians like Phyllis Diller and Moms Mabley bashing at the comedy club gates (so to speak) to finally sway executives and managers into letting female comedians perform on their stages.

But there was one female comedian in particular who foisted gender parity upon comedy clubs.

That woman, of course, was Joan Rivers. Her legacy left behind not only gender parity on stages but also the freedom for female comedians to talk openly and honestly about subjects like sex, abortion, and women in the work place. While Rivers’ cultural impact would be unrivaled on just those two aspects of her legacy, there was a third: Female comedians shouldn’t have to apologize for their jokes.

Rivers’ Ceaseless Efforts to Break Into the Biz

“I am a performer. That is my life. That’s it.” —Joan Rivers

Joan Rivers was born in Brooklyn, New York, in June 1933 (the same year Carol Burnett was born). Her Jewish parents insisted that she get a strong education, which she did by attending Barnard College, known for its prestigious liberal-arts program.

In return, Rivers’ parents let her pursue her dream of becoming a comedic and theatrical entertainer.

Rivers faced — and cleared — countless hurdles as she fought to achieve her dream. Those challenges weren’t isolated to gender, either: She changed her name from Joan Alexandra Molinsky to Joan Rivers, so she wouldn’t be prejudiced, at the top of the bat, as a Jewish.

Moreover, by age 25, Rivers was already a divorcee — another cultural taboo back in those days.

Nonetheless, Rivers fought tirelessly to launch her career as an entertainer. She performed in theatrical productions — including the Off-Broadway play Driftwood, which also starred Barbra Streisand. And Rivers spent as much time as she could in comedy clubs — when not working odd jobs like tour guide, fashion consultant and proofreader.

During those lengthy visits to comedy clubs, Rivers buddied up with George Carlin and Woody Allen — not to mention Streisand, Bob Dylan, and Carly Simon.

Rivers got her career in motion by performing in a cabaret act that was later featured in a film, Once Upon a Coffee House. And she parlayed that movie credit — her first — into a guest appearance on The Tonight Show, hosted by Jack Parr at the time.

But it was her bond with Parr’s successor, Johnny Carson, that gave her a revered male ally who could get Rivers her big break. It was none other than Bill Cosby who recommended to Carson that he give Rivers a shot on The Tonight Show.

So Carson did — and Rivers’ fate was essentially sealed.

The two got along so well that Carson made Rivers his main fill-in for tapings he couldn’t make. In the end, Rivers appeared more than 100 times on The Tonight Show with Johnny Carson.

But Rivers’ drive to make it big was so strong that she had to sacrifice her friendship with Carson to reach even higher peaks.

Rivers took an offer to become the first woman to host a late-night TV talk show — which, in turn, made her a competitor to Carson. To get a sense of just how much Carson felt betrayed by Rivers, look no further than this: After Rivers accepted the offer, Carson never subsequently invited her on The Tonight Show.

From her first appearance on The Tonight Show until her death, Rivers was one of the most prolific comedians ever. She made more than 25 feature films, seven comedy specials, co-hosted a fashion TV show, conducted countless red-carpet interviews at awards shows, won countless honors herself (including her win on The Celebrity Apprentice) … the list goes on.

Rivers was as fierce about free speech as she was about her career efforts.

As Rivers said in A Piece of Work:  “The last line of my original act was: ‘This business, it’s all about casting couches. So I just want you to know, my name’s Joan Rivers — and I put out.”

Half of the audience laughed, the other half — including Jack Lemmon — walked out, she noted.

“I had a joke about abortions when you weren’t even supposed to say the word on television,” she said in the documentary. “My manager took me out and said … ‘you’re going into places you shouldn’t go. It’s not right. It’s not right. Women shouldn’t talk about that.’ I remember thinking, ‘You are so wrong. This is exactly what we should be talking about.”

She crossed the line thousands of times in her act, making jokes about Palestinian civilian deaths to the Holocaust to transgender issues to dead celebrities like Whitney Houston.

“I’ve learned to have absolutely no regrets about any jokes I’ve ever done,” she told The Hollywood Reporter in 2013. “You can tune me out, you can click me off, it’s OK. I am not going to bow to political correctness. But you do have to learn, if you want to be a satirist, you can’t be part of the party.”

As hard as it was for Rivers to get into the comedy business in the first place, she had to keep fighting over the course of her career to break more glass ceilings: parity for older female entertainers. To that end, Rivers began getting plastic surgeries — so many, in fact, that she was barely recognizable later in life.

“Nobody wants an old woman,” Rivers said in A Piece of Work. “So I started with the plastic surgery — little bits and tweaks. Then I got very angry, because no one would admit it. I really became a big advocate of it. So then I became the poster girl for it. Then I became the joke of it.”

In the documentary, Rivers revealed what she feared the most by holding up a blank month planner to the camera.

Much like her friends George Carlin and Don Rickles, Rivers workaholic tendencies continued all the way to her death. Her last project was In Bed with Joan, a weekly online talk show she hosted … well, from a bed. (To be precise, Rivers used the bed of hers kept in her daughter Melissa’s house.)

The last episode of In Bed with Joan aired on August 27, 2014. She died eight days later in a New York hospital. She was 81 years old.

At her eulogy, Howard Stern said Rivers was a “troublemaker, trailblazer for comics everywhere, never apologizing and never caring what people thought. She did everything on her own terms. She fought the stereotypes that women can’t be funny, they should stay in their place, stay home.”

Comedian Anthony Jeselnik made similar remarks on Twitter. “Joan Rivers once told me she would die before she’d ever apologize for a joke,” he wrote. “I’m glad she made it.”

“Never be afraid to laugh at yourself,” Rivers used to say. “After all, you could be missing out on the joke of the century.”

The Washington Post’s obituary for Rivers read: “[Rivers] was as polarizing as she was pioneering. … In interview after interview throughout Rivers’ career, her offstage moments are rendered as vulnerable, deprecating, anxious and insecure. She wanted to be loved by the public, wanted her work to be loved, and she was willing to alter herself unendingly to make that happen.”

Rivers shattered the glass ceiling for female comedians — and comedy fans are all the better for it. Female comics expanded the scope of material that comedians could joke about and even brought new approaches to the comedy performance itself.

While glass can be shattered, a legacy such as the one Rivers had can’t be broken. 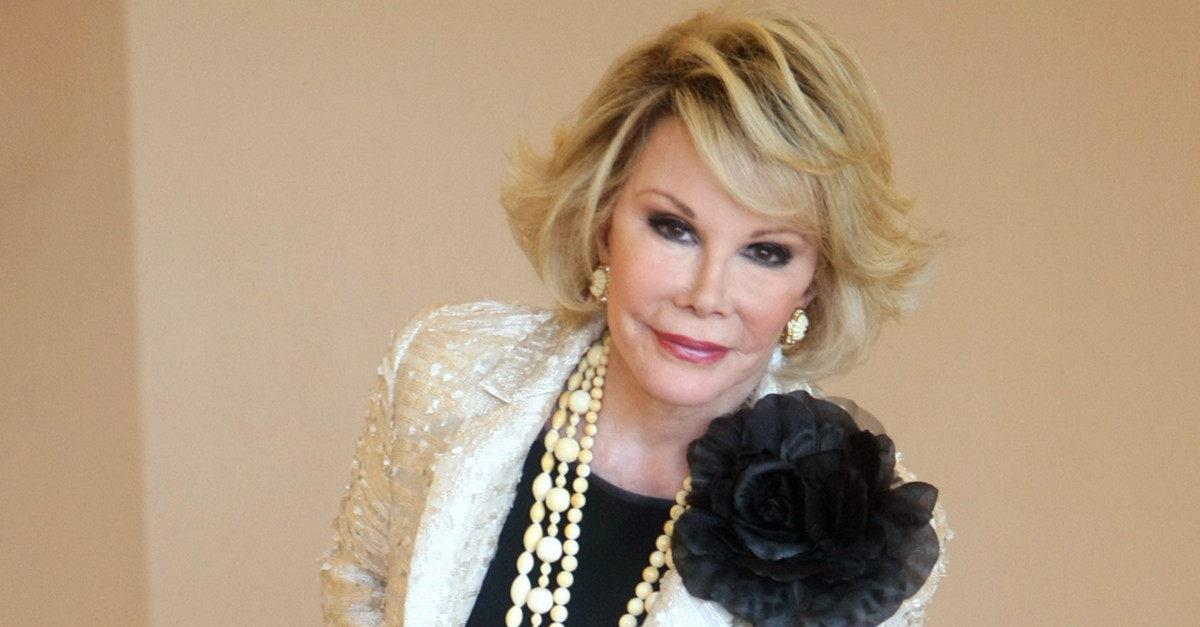