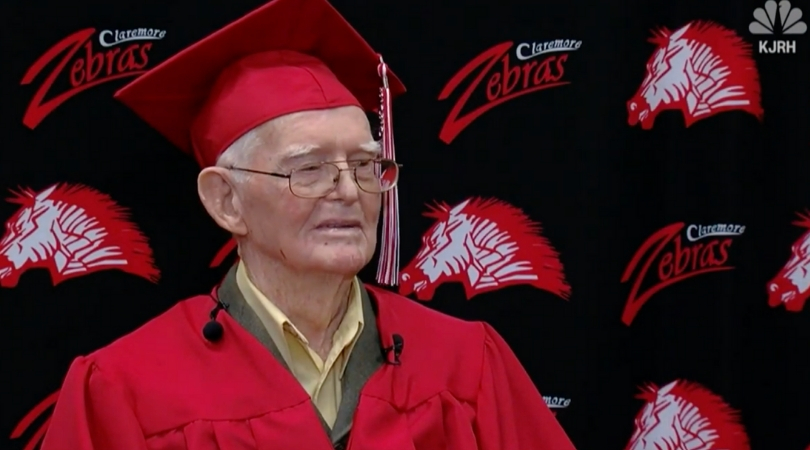 A World War II veteran recently received an unexpected honor of his service to our country. Last Thursday, Corporal Lewie Shaw attended a Veteran’s Day ceremony and left with his high school diploma.

Veteran Lewie Shaw was presented with a red cap, graduation gown, which he wore over his military uniform and received his a high school diploma from The Claremore High School Navy Junior ROTC because he never got the chance to receive his. The 95-year-old WWII veteran left school at seventeen and worked as a janitor and a school bus driver before eventually enlisting in the Marine Corps in 1943.

“I was a little hard-headed,” Shaw stated, “Algebra was my pitfall at school. I refused to try to learn algebra.” He now encourages students to finish school and get their education.

During World War II Shaw saw combat with his assignment, the 4th Marine Division, in battles at Tinian, Iwo Jima, and Saipan. Shaw claims that his post-war life was a “dull life.” He worked for a lumber company for three decades and then went into business with his son.

The Claremore public school in Oklahoma wanted to honor him this past Thursday and give him something special- a graduation ceremony. They also asked him to be the Grand Marshal in the Claremore Veteran’s Day Parade on Veteran’s Day.

Shaw received this long-overdue honor in front of students and faculty, just like in the one he may have missed. The Junior ROTC saluted him, the Claremore High School choir serenaded him and a speech was made in his honor. The auditorium buzzed with excitement which made the 95-year-old veteran shed a tear.