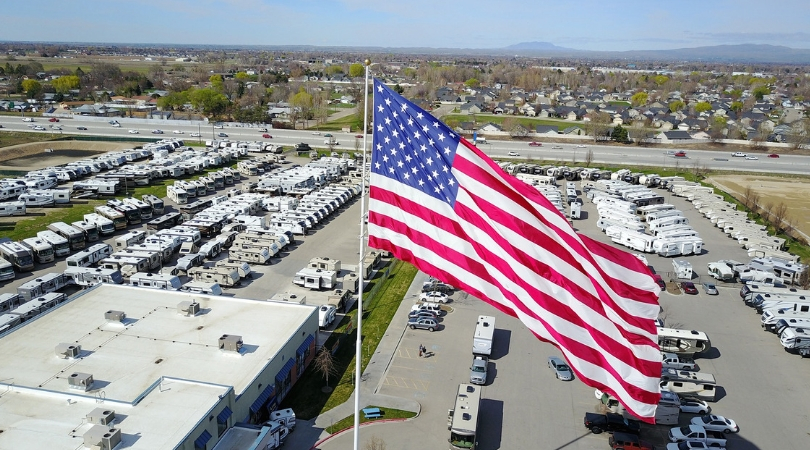 Camping World in Statesville, North Carolina, is fighting back after facing hefty fines for flying a 40-by-80-foot flag on its own property. According to city ordinances, a flag within 100 feet of the highway cannot be larger than 25 to 40 feet. Not agreeing with the fine, Camping World posted a message on its Facebook, saying the city had filed an injunction to require Gander RV to take down the flag in hopes community members would help them fight back.

The City of Statesville has filed a lawsuit to have the flag removed completely, which is why Camping World is rallying the community for support. According to the post, the city is fining the company $50 per day for the massive American flag, going back to October 15th, 2018, totaling nearly $11,000 today.

The company is defending its actions by saying it flies the flag outside of its Gander RV location as a special way to pay tribute to the country’s military veterans. The city had comprised last year by allowing a special exemption for a larger flag than what city ordinance permits, but not the size that Camping World was originally seeking. The motion failed 3 to 5 by city council members.

An online petition has been circling around social media on Change.org, to support the company in keeping the flag up. As of May 21st, more than 105,138 people have signed the petition.

This isn’t the first time there is a lawsuit involving an American flag. In 2015, the state said the store couldn’t fly the flag due to a city ordinance. CEO and Chairman of Camping World and Gander RV, Marcus Lemonis, stated that similar flags are up at more than 200 stores in the countryside, including several cities in North Carolina. All of which have had no problem with them.

Lemonis stated, ?I don?t care if it goes to $500 a day. It’s not coming down. My family has been car dealers, had been car dealers since the 1960s, and our key trademark was always flying our flag in our dealership in South Florida. My family is largely immigrants of the country.?