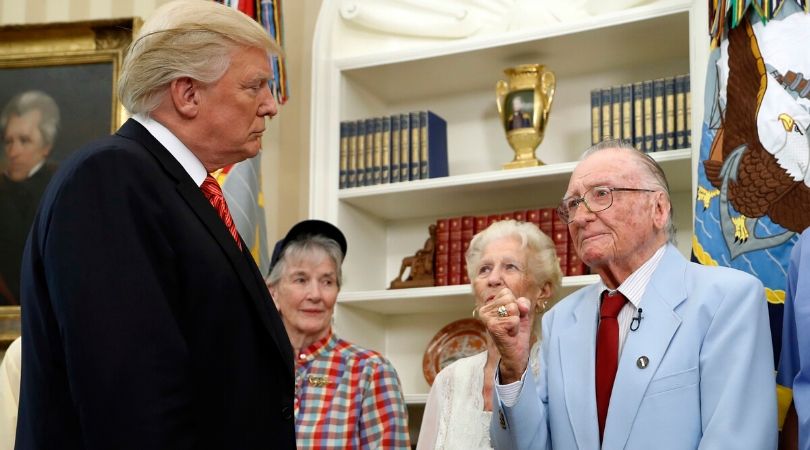 One of the three remaining USS Arizona crew members who survived the 1941 Pearl Harbor attack has tragically passed away. The National Park Service confirmed the death of 97-year-old Donald Stratton.

Through a Facebook post, they showed the flag over the USS Arizona Memorial at Pearl Harbor in Hawaii stating it would be flown at half-staff in honor of his service and his life. Stratton grew up in Nebraska and joined the US Navy back in 1940. According to the National Park Service, his first ship was the USS Arizona.

The Pearl Harbor survivor was among the 334 crew members who survived the sinking. He was with five other crew members in the ship burning and was saved when a sailor from the USS Vestal threw them in line. According to the National Park Service, “He crawled hand over hand, high above the water to safety, being burned over 70% of his body.”

We are profoundly sad to say that last night, February 15, USS Arizona Survivor Donald Stratton passed away peacefully in his sleep surrounded by his wife of nearly 70 years, Velma, and his son Randy. pic.twitter.com/amRuUmAN48

Despite his painful injuries, the 97-year-old veteran re-enlisted and served at the war until he was discharged in November 1946 at the rank of Gunner’s mate second class. Recalling his time in service, Stratton published a memoir in 2016, titled, ?All the Gallant Men: An American’s Sailor?s First-Hand Account of Pearl Harbor.?

The book quickly became a New York Times bestseller, and it is an eyewitness account of the Pearl Harbor attack. The last living members of the USS Arizona crew are Lou Conter and Ken Potts. According to the Associated Press, the quiet hero’s son stated he died in his sleep at his home in Colorado Springs on Saturday.