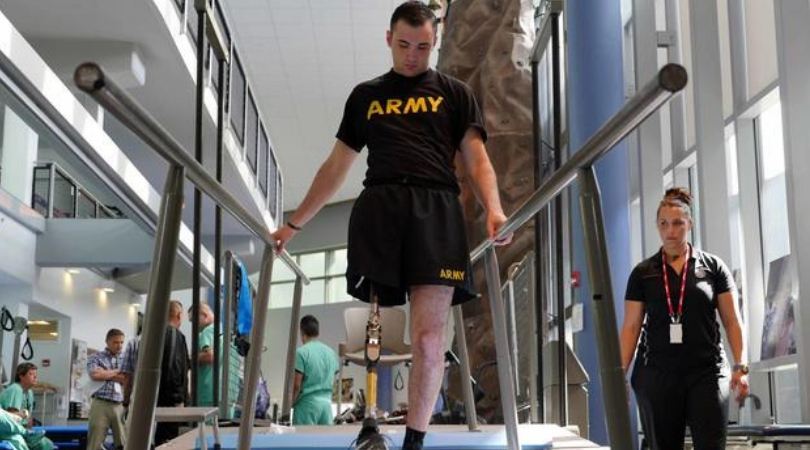 A US Soldier is being called a hero after he amputated his own leg to save his crewmates during an accident. While deployed to Poland last year, Army SPC. Ezra Maes was sleeping in a tank as part of an overnight training exercise when he was awakened by the vehicle rolling downhill. According to the Department of Defense, the crew initiated emergency brake procedures but nothing could stop the tank as it sped down the hill nearly 90 miles per hour.

According to the 21-year-old, he called the driver to step on the brakes but shouted back that it wasn’t him. The 65-ton M1A2 Abrams tank had a hydraulic leak, and the operational systems were not responding. Realizing there was nothing else to do they all decided to hang on any way they could. The tank ultimately crashed into an embankment, sending the soldier flying across the machinery where his leg he got caught in a turret gear.

We salute the soldier who sacrificed his leg so he could save his battle buddieshttps://t.co/kk0vN6XCC0

Worried about his crewmates, Maes was determined to free his own leg any way he could. He stated, ?I pushed and pulled at my leg as hard as I could to get loose and felt a sharp tear. I thought I had dislodged my leg, but when I moved away, my leg was completely gone.?

The soldier was losing blood fast but decided to push the pain and panic aside. He headed to the back of the tank to find a medical kit after he knew his body was going into shock and decided to fight the pain. He began shock procedures on himself, forcing himself to remain calm to keep his heart rate down and elevate his lower body. He then used his own belt to form a makeshift tourniquet to avoid more blood loss. The driver, PFC. Victor Alamo suffered a broken back and was pinned down as well.

As they were calling for help but the system wasn’t working, Maes recalls his cell phone rang which was the only phone to survive the crash and pick up service. He decided to call out to another Soldier, Sgt. Aechere Crump, who was also badly injured from his legs but was able to throw Maes his phone over. He then sent a text to a friend to get help for the crew.

According to the soldier, the last thing he remembers from the crash was his Sergeant Major running up a hill with his leg on his own shoulder. Doctors attempted to save his leg but it was too damaged from the crash and couldn’t be re-attached. Maes was flown by helicopter to a local hospital in Landstuhl, Germany.

He is currently undergoing physical rehabilitation and occupational therapy at Brooke Army Medical Center in Houston, Texas and is awaiting surgery to receive a new long-term prosthetic leg that will be directly attached to his remaining limb. Despite his injury, the soldier says he and the rest of the crew feel very lucky they are still alive. The soldier hopes to become a prosthetist to help other people who lost their limbs during combat.

This article was originally published on October 21, 2019.