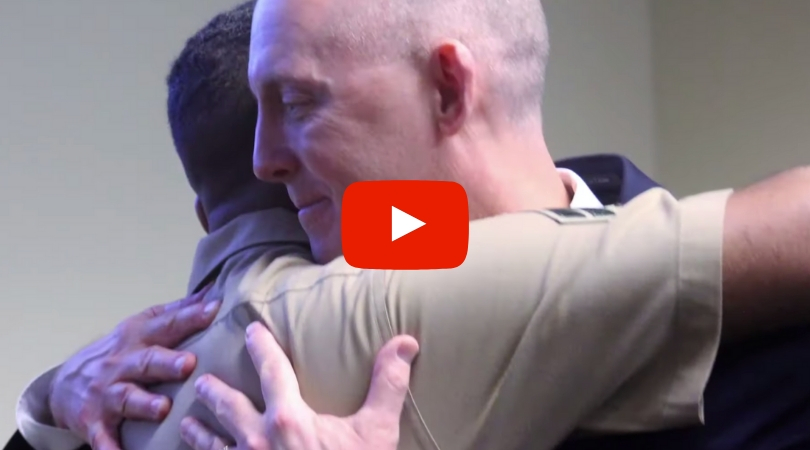 A Marine who was kidnapped as a newborn over two decades ago finally met the brave FBI agent who saved his life. On August 23, 1997, Troy Sowers was on the job two months at the FBI’s Tacoma Resident Agency, when he rescued a baby boy from a dumpster in Tacoma, Washington.

Who was the newborn? Well, that newborn is now a 170-pound U.S. Marine Corps Corporal who is stationed in Camp Lejeune, North Carolina. Marine Corporal Stewart Rembert was only 2 days old when he was kidnapped from St. Clare Hospital in Lakewood, by a woman who was wearing a lab coat and posing as a doctor. He didn’t learn about the kidnapping until he was 5-years-old.

The kidnapper spoke to Rembert’s mother and later offered to take the baby so the mother could get some sleep. After a 19-hour search, authorities arrested the woman and she agreed to lead Sowers to where she abandoned the boy hours earlier. Luckily, the baby was found unharmed in a cardboard box behind a convenience store. According to the Rembert, if it wasn’t for Sowers and his quick thinking, he wouldn’t be where he is today serving as a Marine.

The reunion took place in Knoxville, Tennessee at Sower’s FBI retirement ceremony. Rembert thanked the FBI agent for giving him the “opportunity of a lifetime.” He is proud that he is able to put on his uniform every day and help others and his country.

Sowers is retiring from the FBI as a special agent in charge of the bureaus’ field office in Knoxville. Rowers said he was only expecting coffee and donuts for his retirement party and was shocked to be introduced to Rembert, calling it a lifelong impact. He stated, ‘Today when I saw him, I had to pause a couple of seconds to keep my composure. This case was something I remembered throughout my career.” He also noted that he was proud of Rembert for serving others above himself, which makes the case even more special.