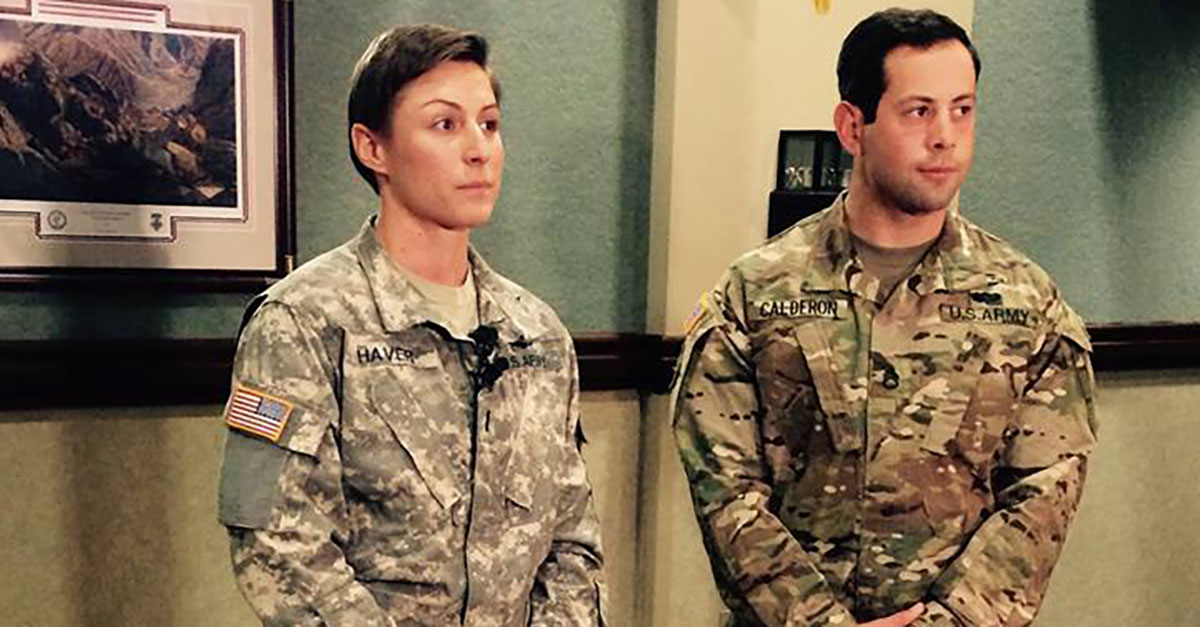 What is it like to be one of the elite few who graduates from Ranger School? 1st Lt. Shaye Haver, one of two women who made history by becoming the first women to earn the Ranger tab, said in an interview that it was difficult, but worthwhile. Haver, who is now stationed at Fort Carson, was recognized this week alongside Staff Sgt. Michael Calderon, who went through Ranger School with her and was the top graduate in their class. According to Calderon, everyone there was too tired and too hungry to notice that there were female students in the course. And it was so hard that both of them wanted to quit at times.

For Haver, the hardest part was a hike in the mountains. “It felt like we had walked, seriously, for a 24-hour period,” she said. For each soldier going through training, the difficulties were different — and that was something they had to overcome, too. “It’s learning to lead through what everyone else is going through,” she explained. “So, the hardest thing for somebody might be the lack of food is so difficult for them, they’re hungry and they can’t keep their minds on the task. Or they’re so tired — and it’s beyond tired. It’s exhausted to the point that you can’t focus or you can’t stay awake long enough to hear your next direction […] so learning how to motivate people in those situations, learning how to lead. Knowing inside and out the task that you have, the small unit tactics that have got you to that point, and just applying them in those situations to motivate people.” Haver had to repeat certain parts of the course, which made Calderon respect her even more. “I have no clue how, uh-uh, if I had to be there more than 62 days, I don’t know,” he said.

According to Haver and Calderon, the instructors constantly egged them on, telling them that it would all be over if they just quit. Haver said there was one thing that got her through it. “There were many times, whether it was weather — it was just horrible, it was either cold or hot — you just couldn’t get enough water and you still felt dehydrated, you think back and you have to keep reminding yourself, ‘What is it? What is keeping me here?’,” she said. “For me it was the ground soldiers, it was eventually being competent enough for someone to follow me into battle. Those things would come up in my mind every time something hurt.” And it was that determination that led her to be one of the first women to earn that elusive Ranger tab.

Yesterday, we had the honor of speaking with Fort Carson 1st Lt. Shaye Haver and Staff Sgt. Michael Calderon. Haver has...