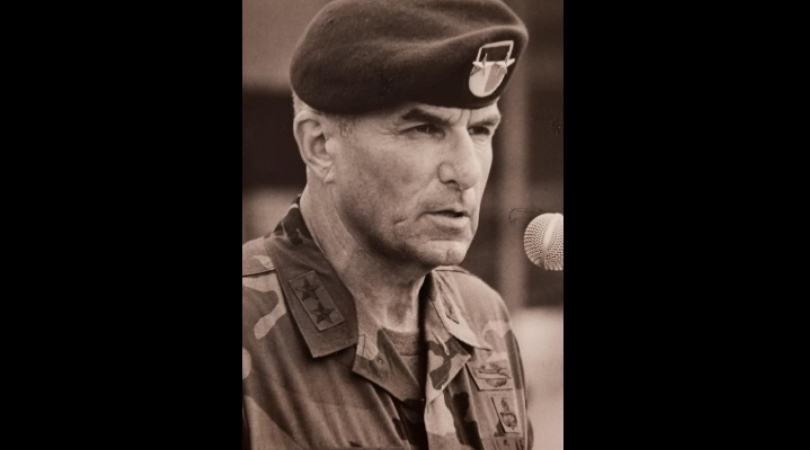 Many around the world are mourning the death of Holocaust survivor and Vietnam Veteran, Sidney Shachnow, who passed away at the age of 83 on September 27. Shachnow was a U.S. Army Green Beret before becoming a major general and was involved in some of the biggest events of the 20th century, from enduring the horrors of Nazi-controlled Europe to leading U.S. Army troops in Berlin during the fall of the Berlin Wall.

Shachnow served in the US. Army Special Forces for more than 40 years, a career informed by a childhood spent avoiding death. He retired in 1994. At the age of 6, the general was among thousands of Jews held prisoner at the Kovno concentration camp near Kaunas, Lithuania. Though laborers were often beaten to death or starved, Shachnow survived for more than three years living at the camp before being liberated.

His father escaped German detention and spent the rest of the war fighting against the Nazis with a partisan resistance group. His mother was sent to a concentration camp. The three eventually reunited and moved to the United States, where they began a new life in Massachusetts. Finding a passion to help people, the Major General decided to drop out of school to enlist in the army, despite hardly being able to speak English.

In 1994, the general told The Fayetteville Observer that the experience of a concentration camp left him deeply marked, making him cynical about people, losing his trust in people around him. Yet, the U.S. Army helped the general regain faith in the world again. The general found his calling the U.S. Army after immigrating to America in 1950. He enlisted in the army in 1955, where his top post included leaders of the John F. Kennedy Special Warfare Center and School and U.S. Army Special Forces Command at Fort Bragg and U.S. Army-Berlin in Germany.

Attending Officer Candidate School as a sergeant first class, he was commissioned in 1960 as an infantry officer. He served with the 4th Armored Division until 1962, later served with the 5th Special Forces Group and commanded the service ?Detachment A?, a small team of special forces soldiers who operated in Berlin during the Cold War and prepared for a possible war with the Soviet Union.

In 1990, he was the commander of all American forces in Berlin when the Wall was toppled, near the end of the Soviet Union. Throughout his time, not only did her serve in infantry, airmobile, airborne, and Special Forces units but also earned degrees from Shippensburg State College in Pennsylvania and the University of Nebraska. As well as receiving an honorary doctorate for the Harvard Executive Management Program.

In 2007, he  was inducted as a Distinguished Member of the Special Forces Regiment had two Distinguished Service Medals, two Silver Stars, the Defense Superior Service Medal, the Legion of Merit, three Bronze Stars and two Purple Hearts, among other honors. He was also honored with U.S. Special Operations medal for outstanding contributions to the special operations community and is included on the honor roll in the Infantry Officers? Hall of Fame at Fort Benning, Georgia.

Shachnow retired as a major general in 1994, releasing an autobiography in 2004 titled ?Hope and Honor? which won him a best selling autobiography title. In 2016, he was among 88 former military leaders who endorsed Donald Trump for president.

Read: Sob-Worthy Video of Soldier Surprising Dad at Work Will Make You Grab the Tissues, Too