It’s no secret that dogs are our good luck charms. They quickly become our best friends and make us want to live every day like they do, happy and free. As we realize this, society has shifted to allow therapy/pet dogs into a variety of establishments. And we love it. There are even dog spotting pages on social media platforms.

That being said, did you know that during World War II there was a dog who served in the war? Yes, meet Smoky the Yorkie, the very first therapy dog who also happened to be a war dog. An adult Yorkie at only 4 lbs and 7 inches tall, the Yorkie became a beloved hero. Her heroic acts also generated interest in the Yorkshire Terrier breed of dogs, which was obscure during her time.

During World War II, a stalled Jeep engine in New Guinea jungle brought Smoky to American soldiers. They heard the little dog making noise while trying to fix the engine and she was found in a nearby abandoned foxhole. The soldier who found her sold her to a young Corporal William A. Wynne from Cleveland, Ohio, for two Australian pounds. Why? Apparently, the soldier who found her was in need of quick cash for a poker game that night. She was called “Smoky” for her smoky-grey colored fur.

Smoky the Yorkie spent the rest of her time with her new owner. She slept in his tent, shared C-rations and spent her free time with him. Wynne had a knack for training dogs and taught Smoky many tricks. He taught her to dance the jitterbug, taught her how to “sing,” and sometimes dressed her in a clown suit to entertain the troops. He brought her on his missions where she often hung in soldiers backpacks or from the ceiling in a makeshift pouch.

Smoky the Yorkie became a mascot pet as she accompanied William Wynne on his missions. Together they achieved some pretty memorable moments, earning 8 battle stars. She is also credited in participating in 12 combat missions. In Okinawa, she survived a Typhoon and in New Guinea Smoky survived over 150 air raids. Once, the little dog parachuted from 30 feet in the air, out of a tree, using a parachute- one made especially for her. One of her biggest feats was helping engineers build an airbase at the Lingayen Gulf on Luzon.

With her small size, she was able to navigate through a 70-foot-long culvert beneath an airfield. She completed a job in a few minutes that would have taken hundreds of crewmen multiple days to complete. She even saved William’s life when his 5th Air Force 26th Photo Reconnaissance Squadron was attacked during an air raid while headed to the Philippines. She helped him navigate off of an exploding ship’s deck avoiding bullets. Wynne believes she sensed where the bullets would land. The eight men next to them were wounded from the bullets. However, neither Wynne or Smoky were hurt.

When Bill Wynne and Smoky arrived home post World War II they were featured in the Cleveland Press. The pair, along with Margie, Wynne’s wife, traveled to Hollywood and visited TV spots to showcase Smoky’s skills that she performed for the troops during the war. This was their career for almost a decade. They performed nearly 45 live shows without any repeat tricks. One of these was her waking on a tightrope blindfolded.

Smoky entertained the troops in her free time. Yank Down Under magazine named her the “Champion Mascot in the Southwest Pacific” in 1944. There are awards named after the little war hero, for making such an impact, even though she wasn’t considered an “official” war dog.

On February 21, 1957, Smoky died unexpectedly at the age of 14. Smoky was buried by Wynne and his family in the Cleveland Metroparks in a World War II ammo box. Atop her grave, a bronze sculpture of Smoky sitting in a GI helmet sits. It is a recreation of the picture Wynne took of her years prior for the Yank magazine competition.

William Wynne, now 97, lives on and wrote a memoir about his dog entitled Yorkie Doodle Dandy which can be found on Amazon. A screenplay has thus been written on it and allegedly he is looking for a producer.

This story was originally published September 23, 2019. 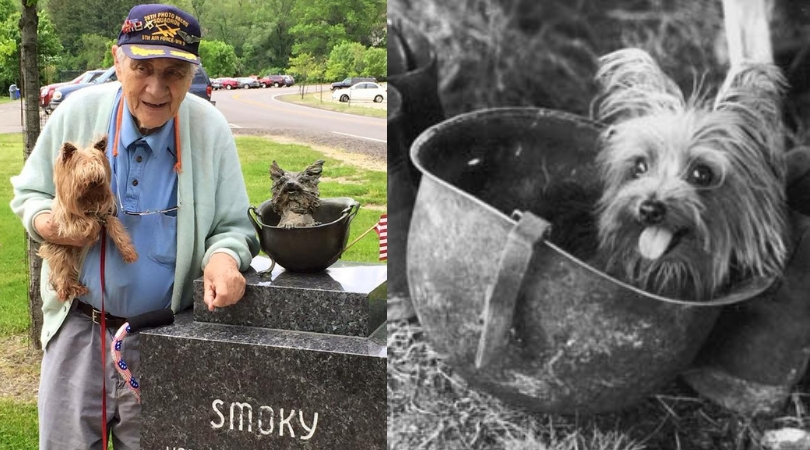