The country was outraged when video surfaced of a Trump rally last week that showed a group of men shoving a black woman. In the video, Trump can be heard yelling “get out”, while the New York Daily News reported that he repeatedly told the crowd to “get them out of here”. Notably, one of the men shoving the woman, identified as Shiya Nwanguma, was a military veteran. You can see the man, wearing the Korean War Veterans Association barracks hat and shirt, shoving her repeatedly, while Nwanguma tells him to stop pushing her. Now, that veteran has been identified — and he’s speaking out.

Alvin Bamberger is a Korean War veteran, and a member of the Korean War Veterans Association. He now is apologizing for his actions in a letter he sent to the association president, Larry Kinard. The association confirmed that they received the letter to Military.com. In it, Bamberger took responsibility for his actions, admitting that he got caught up in the furor and shoved her down the aisle, something he says he now regrets.

“I have embarrassed myself, my family, and veterans,” Bamberger wrote. “This was a very unfortunate incident and it is my sincere hope that I can be forgiven for my actions.”

In addition to shoving Nwanguma, Bamberger can be seen shouting in her face for her to get out, yelling, “We don’t want you here!”, but insists that he didn’t do so because she is black. He says that when Trump appeared on stage, Black Lives Matter protesters rushed toward the stage, pushing and shoving along the way. Bamberger says that he was knocked down by the protesters, which is when he claims Trump started yelling for people to get the protesters out of the rally. People began pushing the protesters back.

“My emotions got the best of me, and I was caught up in the frenzy,” he wrote. “I physically pushed a young woman down the aisle toward the exit, an action I sincerely regret.” He says he didn’t know that the people around him were white supremacists. But despite all of that, he admitted that there was no excuse for his behavior.

According to Kinard, Bamberger was not representing the Korean War Veterans Association at the rally. In a press release, Kinard vowed to investigate the incident, saying that the association does not condone his actions.

“The KWVA places a great deal of emphasis on the conduct and decorum of KWVA members at public meetings,” Kinard said in the release.

The organization’s code mandates that members not participate in illegal or unethical behavior, as well as conduct themselves with proper decorum and dignity. Once the association finishes its investigation, action could be taken against Bamberger.

Read more:
Marine Corps hopeful gets booted after being caught on video doing this at a Trump rally 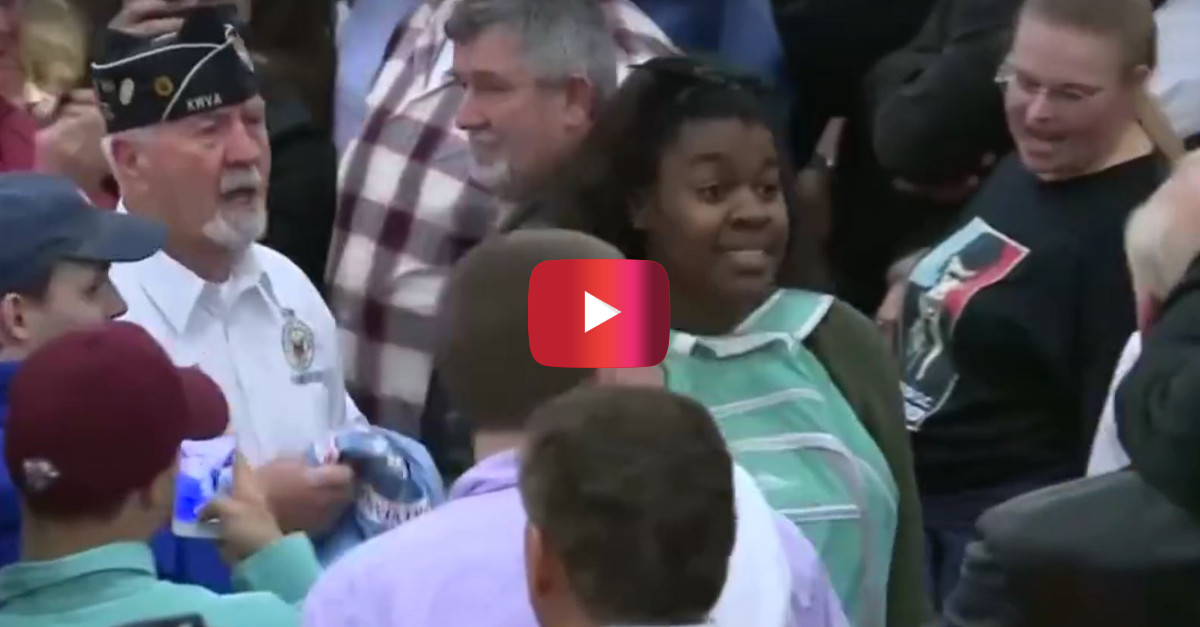