It was an emotional day at the Arlington National Cemetery after dozens of trucks and thousands of volunteers delivered more than 260,000 Christmas wreaths to honor fallen heroes. The day of service was made possible by The Wreaths Across America organization.

The annual wreath laying is a tradition in its 27th year. It spans all 50 states and 26 countries. Nearly 2 million wreaths were placed in total, with a goal to give heroes across the world a gift this holiday season, honoring soldiers who served and died for the county. This was the first year permission was granted to place wreaths at Normandy to honor those who died during World War II’s D-Day Invasion.

Last year more than 75,000 volunteers placed wreaths at 245,000 Arlington gravesites. This year, the organization placed a staggering 1.75 million wreaths to 1,640 locations, with ceremonies across the United States. Volunteers were instructed to “say the name” of the person as they lay wreaths on their headstone. Organizers make it a point remind the public that although the person died, they are remembered as long as someone says their name. This is done since some of those interred at Arlington may not have had their name said out loud since last year’s Christmas wreath.

This year President Donald Trump made an unannounced visit to the Arlington Cemetery, paying his respect while volunteers waited in long lines to place the wreaths on the tombs. Trump walked through the grounds and viewed firsthand the tributes that were given to America’s veterans, admiring the work volunteers had done through the day.

Usually, the wreaths remain throughout the year-end holidays and another coordinated event occurs in January when volunteers and U.S. troops remove the wreaths. 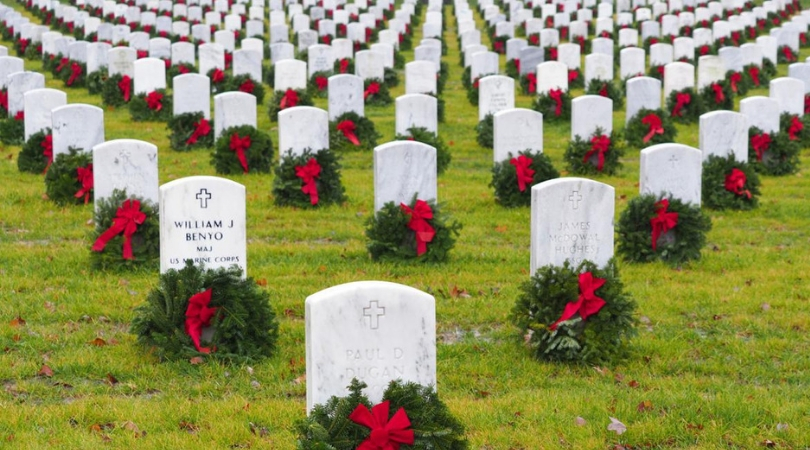