It’s amazing how Luke Bryan can make an arena of thousands feel like they are in a small town bar with just a few close friends. And, that’s exactly what the country superstar does every time he does a singalong at one of his concerts.

During a Feb. 18 show in Arkansas, Luke invited tour openers Brett Eldredge and country newbie Adam Craig to sing with him on a tribute to some old school country. After they all took a shot, the three embarked on the song “Neon Moon” by Brooks & Dunn, with each of them taking their turn on the vintage hit.

And quickly, the whole crowd couldn’t help but sing along.

RELATED: Luke Bryan proves he can sing anything in this medley of The King of Country Music classics

Currently on the last leg of his Kill The Lights Tour, Luke and Brett will continue this singalong tradition throughout 2017, as Luke will embark on his Huntin’, Fishin’, And Lovin’ Every Day Tour this May, kicking off with a show at Nashville’s Bridgestone Arena on Friday, May 5. A bevy of openers such as Lauren Alaina, Craig Campbell, Adam Craig, Seth Ennis and Granger Smith are taking turns on the tour.

In addition, it was recently announced that Luke would find time in his packed schedule to headline the sixth annual Watershed Music and Camping Festival in The Gorge, Washington alongside artists such as Darius Rucker and Chris Stapleton. 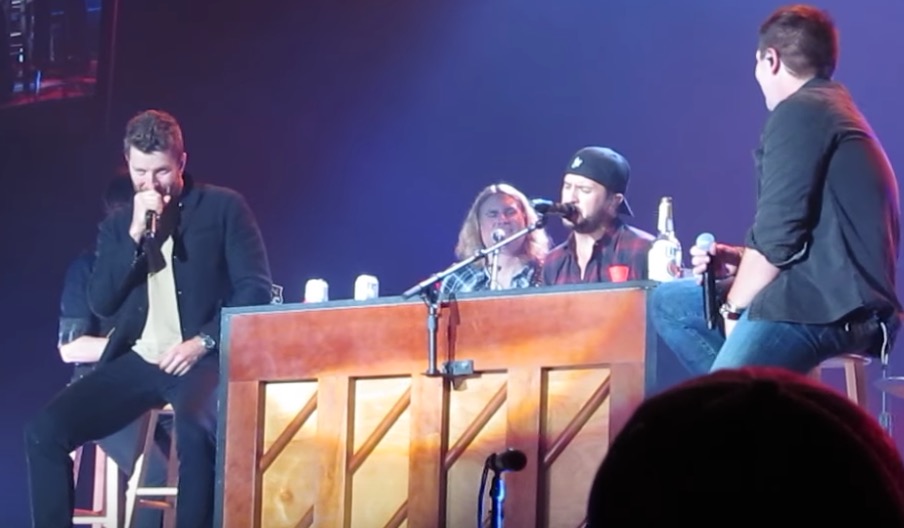