Country stars go to the mat when it comes to giving their fans the best possible live show they can. Running from corner to corner of the stage, dancing down catwalks and thrusts, and going to the very edge to slap every hand or sign every hat.

But every once in a while, there’s a misstep. A stumble that sends our favorite country stars landing flat on their tushies or sliding chin first across the platform. What host Erin Holt finds in this week’s Rare Country’s 5 is that country stars bounce right back up. Let’s take a look at some of the five biggest wipeouts in country music.

Talk about bouncing! Pop-country star Taylor Swift didn’t miss a beat when she took a spill onstage in 2010. What’s crazy is that she had just navigated a long set of spiral stairs with incredible grace. It was only after she hit level ground that she lost her footing. Fortunately, she wasn’t seriously hurt.

RELATED: Taylor Swift is no stranger to the game of love

That wasn’t the case when Granger Smith took a tumble onstage late last year. Like many artists in country music, the wedge monitors make a good place to prop up a leg. When Granger did that during his show in New Jersey, he lost his footing and went from the stage to a metal barricade, breaking ribs and puncturing a lung. It sidelined the Texas country star for a minute, but he’s back at it now.

Tyler Farr is one of the funniest country stars in the biz and often his humor comes at his own expense. Even when he took a jarring spill from the edge of the stage in Virginia, he turned it into a social media opportunity. He revealed technicolor bruises then asked fans to share video. This 2015 tumble wasn’t his first, though. In fact, Tyler took a bigger fall in Jamaica when he tried to break into buddy Jerrod Niemann’s second floor hotel room, but that’s a different story.

We like to think of Carrie Underwood as one of the most beautiful and graceful women in country music. But even she isn’t exempt from biting it on stage. During a 2013 show in Texas, Carrie was stomping her 5-inch stiletto to “Undo It” when the heel got caught in the hem of her long top sending her to her bottom. Cool as a cucumber and never missing a note, she simply untangled herself and continued. But as calm as she was, she did end up in a cast.

When it comes to biting it on the stage, Luke Bryan has met his quota and covered a few other stars, too. While he might joke that he’s just clumsy, if you’ve been to one of his shows, you know it’s more likely that he’s going at such an intensity that he practically whirls himself off the stage Tasmania Devil style! And as much as we love that he leaves every ounce of energy he has on that stage, we hate it when it results in a fall. And we hate it even more that one of those spills cost him a few stitches.

That’s it for this special edition of Rare Country’s 5. As always, thanks to charming Erin Holt for counting up these near-catastrophes and here’s to the wipeout kings and queens of country music. We appreciate the sacrifices they make to bring us the best show possible, but we hope for safer stages in the future. 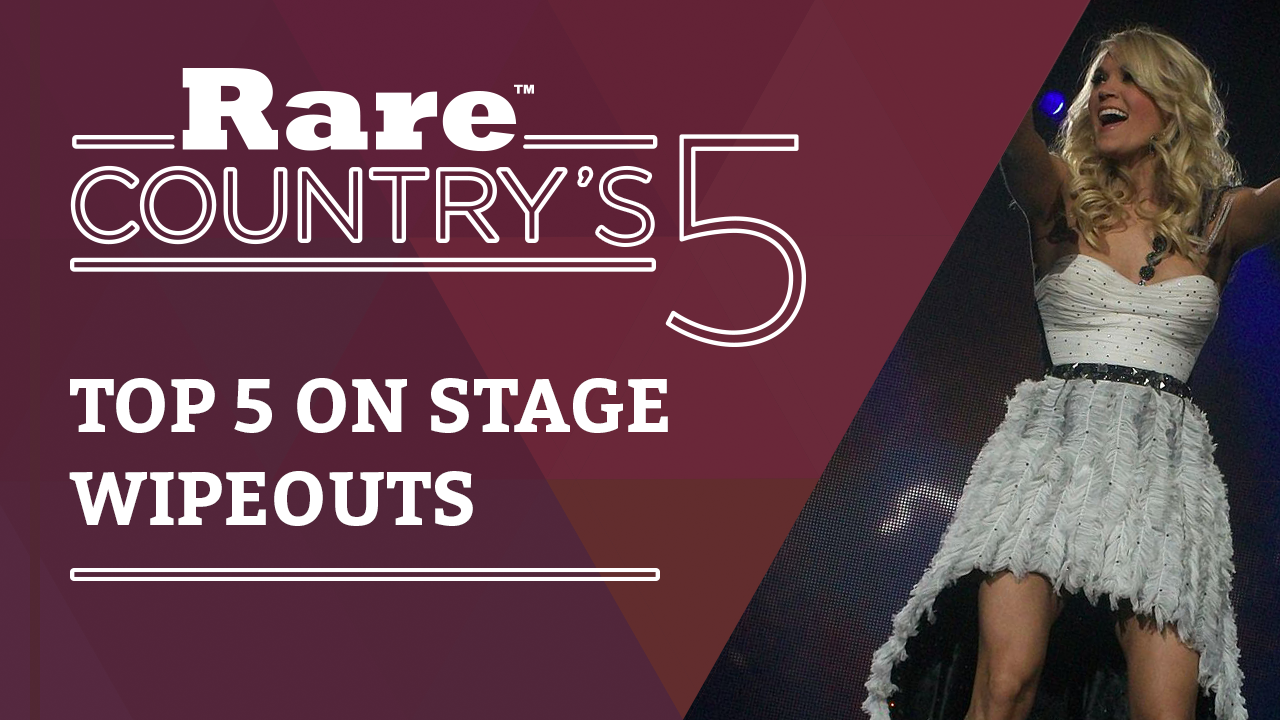