The Rare Country Awards honor the year’s best in country music as determined by fans. Rascal Flatts is up for duo/group of the year. Cast your vote at RareCountryAwards.com. Winners to be announced Dec. 15.

If you’re worried about the future of country music, well, just relax. There are plenty of young fans out there to keep it alive, thanks to parents that play country music and even take them to country concerts. And from the looks and sounds of it, some of those young’uns could end up being stars themselves.

We’re seeing more and more kiddos being invited on stage with artists like Keith Urban and Luke Bryan and stealing the show by playing and singing along. Now Rascal Flatts has learned what it feels like to have the spotlight stolen by a young fan. And it doesn’t look like lead singer Gary LeVox minds one bit!

RELATED: Rascal Flatts release a new version of their most inspirational hit

Gary invited a little lady on stage during their recent show in Dallas. At first, it seemed like she was just excited to be there, but she quickly took her chance to work the audience up by throwing her hands in the air and waving them back and forth in rhythm to the Rascal Flatts hit “Rewind.” When Gary noticed that the cutie-patootie was singing along, he generously handed her the microphone and she confidently took it and belted out the bridge before politely handing the microphone back so she could resume her cheerleading. She even took a lap to high-five a very supportive audience.

When she rejoined Gary at center stage, you can tell that the magnitude of where she is and what she’s done has set in and she clutched her little heart in appreciation and tentatively hugged the singer. But Gary wasn’t finished with his new duet partner. He handed her the microphone at the end of the song and coached her to say thanks, and it was more than the crowd could bear. When Gary picked her up and bear hugged her?

Well, it was drops the mic time. 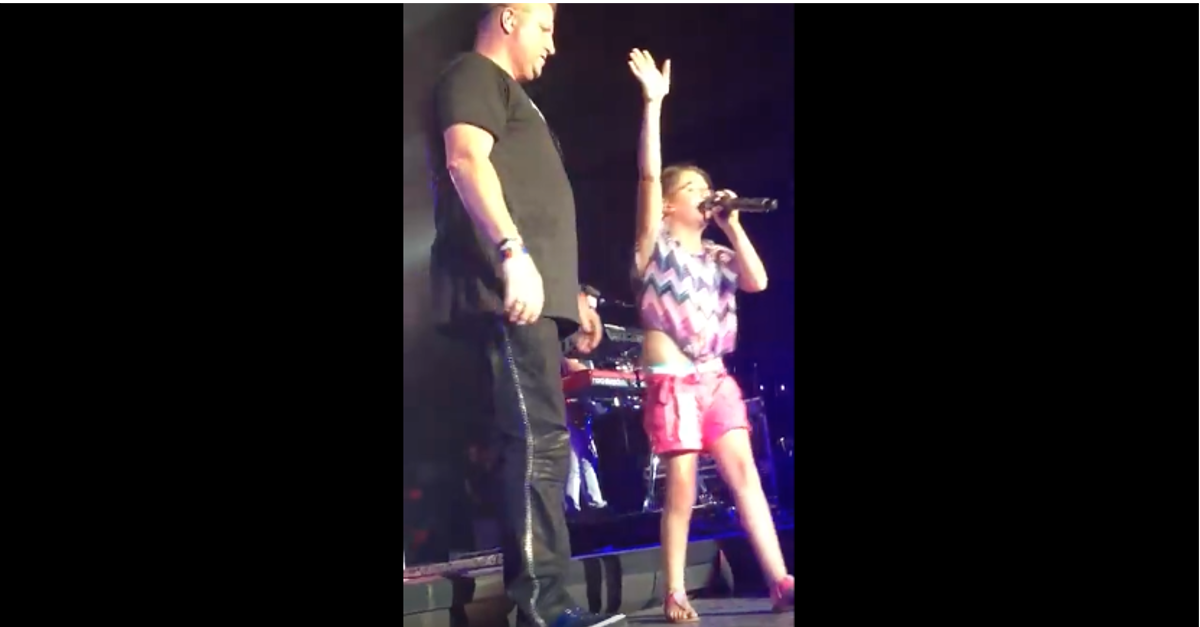