If you are one-half of a couple, chances are you spent Feb. 14 celebrating your love, passion and union, and quite possibly were grossing out the part of the population that remained untethered on Valentine’s Day. OK, we’re just kidding about the grossing out part. It’s doubtful that the solos among us begrudge the couples any of their joy, but there might also be a good reason that singles are single on a holiday that’s all about love. Maybe that’s because they’ve been cheated on. Or maybe they were the cheaters…Yikes!

Either way, there are lots of great anthems on cheating, but for some reason, country music has cornered the market on the best ones. Rare Country’s 5 takes a look at some of those great deceitful ditties and, let’s be honest, this list could have been a lot longer, because nobody sings ‘em like country stars do.

In our No. 5 spot, when it comes to zero tolerance policies, Miranda Lambert demonstrated one in the romping smash “Kerosene.” After her fictitious lover was found in the arms of another, she simply eliminated him. Boom. Done. And with no regrets, we might add.

Favorite line: “Now I don’t hate the one who left, you can’t hate someone who’s dead.”

RELATED: Watch as Miranda Lambert gets her glamour and gossip on in this new video

We’re off to a blazing start!

What do you do when you’re being cheated on, but your spouse still comes home to you? That’s the conundrum that Reba faced in “Does He Love You,” our No. 4 cheating song. Honestly, though, cheating never sounded as good as it does in this dramatic duet between the fiery redhead and Linda Davis (Lady Antebellum’s Hillary Scott’s mom). If you’ve never seen the video, go do it right now and check out what Erin has to say in Rare Country’s 5 video.

Favorite line: “You have his mornings, his daytimes and sometimes I have his nights.”

Cheating is nothing new in country music, and Loretta Lynn proves that in our No. 3 selection, “You Ain’t Woman Enough (To Take My Man).” It sounds like Loretta and Miranda subscribe to similar philosophies when it comes to dealing with cheaters, and someone isn’t going to survive the scuffle.

Favorite line: “I don’t know where they leave you, but I know where I’ll stand…”

Our No. 2 song is a little more heartbreaking because, let’s face it, sometimes you can’t help who you love. Sugarland made a convincing argument for trying to make it work, no matter which side of the cheating you’re on. But in the end, the right thing prevails, no matter how painful it is.

Favorite line: “So next time you wanna leave her bed for mine, why don’t you stay.”

RELATED: Carrie Underwood couldn’t hold back her tears during the George Michael tribute at the Grammys

No one would ever think that Carrie Underwood would have a bitter bone in her beautiful body, but thanks to our No. 1 song, “Before He Cheats,” we respectfully stand corrected. Louisville slugger in hand, Carrie was all too happy to get revenge on a lying cheater in this sassy serenade and we can’t help but enjoy the fallout. Ouch!

Revenge outweighs forgiveness in this week’s Rare Country’s 5. Thanks to Erin for taking on these heavy-hitters, and we do mean hitters (thanks to Carrie). We hope that this week’s video has given you a musical break from your day and our fingers are crossed that you’ll never be a victim of Cheaty McCheaterson. 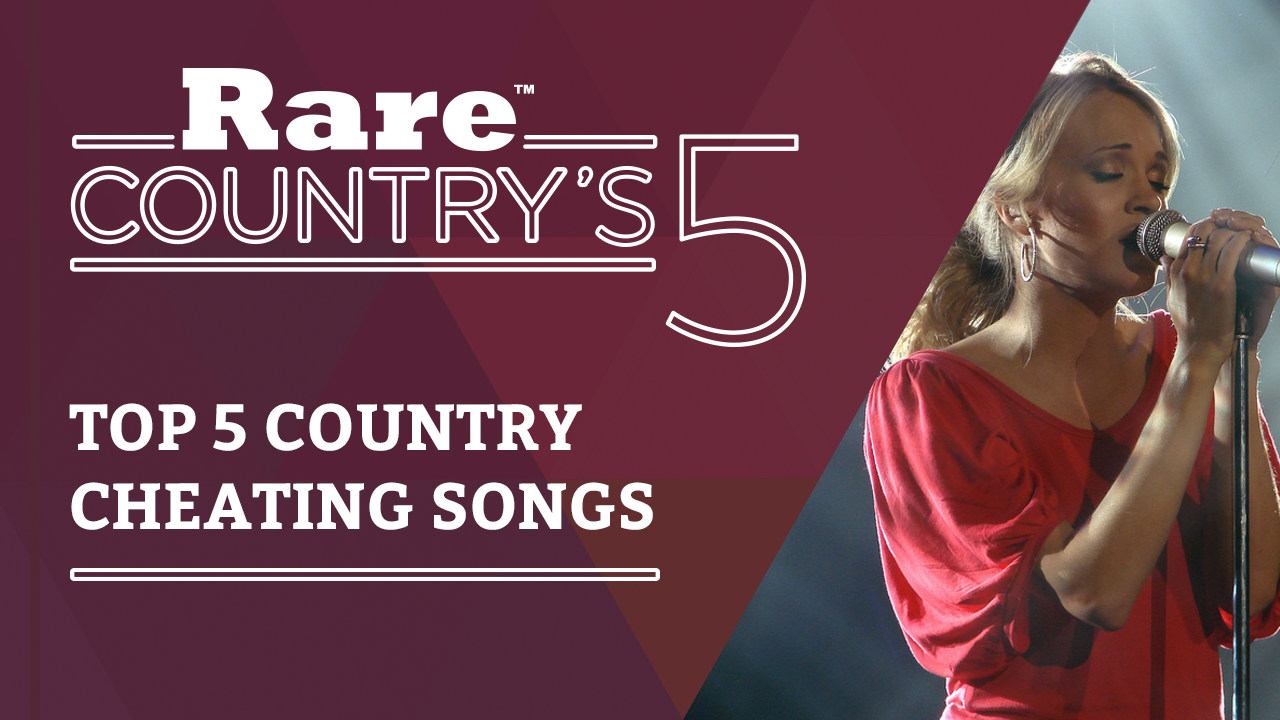