Perhaps one of the biggest joys in life is getting to witness a child’s priceless reaction when they experience something for the very first time.

Well, that was the kind of moment that thousands of fans got to see at a recent Luke Bryan concert.

On Oct. 15, Luke performed in Centralia, Missouri as part of his eighth annual Farm Tour. And, like many other times, he wowed the crowd with his dance moves, voice and catalog of hits. But, for 5-year-old Harper House, everything was brand new.

You see, this was Harper’s first time attending a Luke show. Her parents Jason and Shelly House surprised her with VIP passes as an early birthday gift. But, what the family didn’t know is that they were about to get way more than what they bargained for. After arriving at the venue, Luke pulled Harper onstage! He then held her close and serenaded her with his 2014 smash, “Roller Coaster.”

Following the show, Harper’s mother uploaded a video of her daughter’s special moment on Facebook.

As you can see in the adorable video above, Luke gets down on his knees to match the height of his little super fan. They share a sweet embrace that’s warm enough to make Luke drop his jaw. And, just like the father that he is, he noticed Harper’s tiny foot get caught in the microphone cord. So, he gently moved it away from her pint-sized boots. But, what’s even more heart melting is that he twirled the cutie around and retrieved a pink-colored cowgirl hat from the audience to put atop her head. Of course, Harper didn’t hesitate to sing along with the country crooner! Luke then sealed their sweet exchange with a kiss on the cheek!

Along with the video, Shelly writes, “We knew we would make some awesome memories, but this moment she will forever cherish!! Thank you so much Luke Bryan you made her entire year, in a short 2 minutes!!”

Luke you made ours, too! 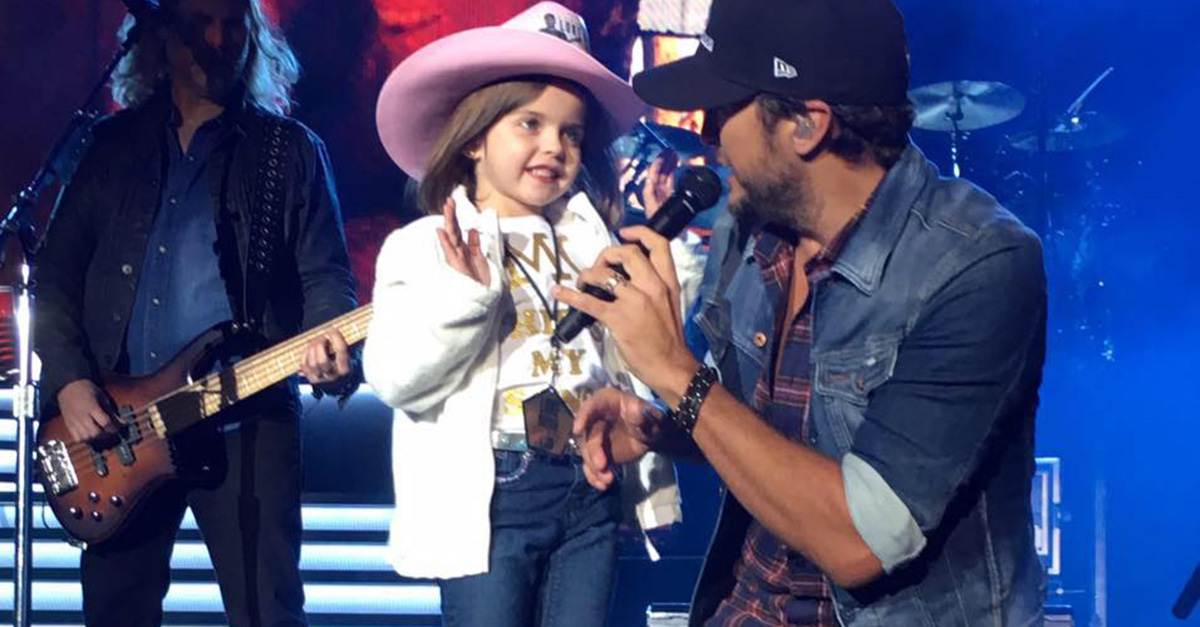