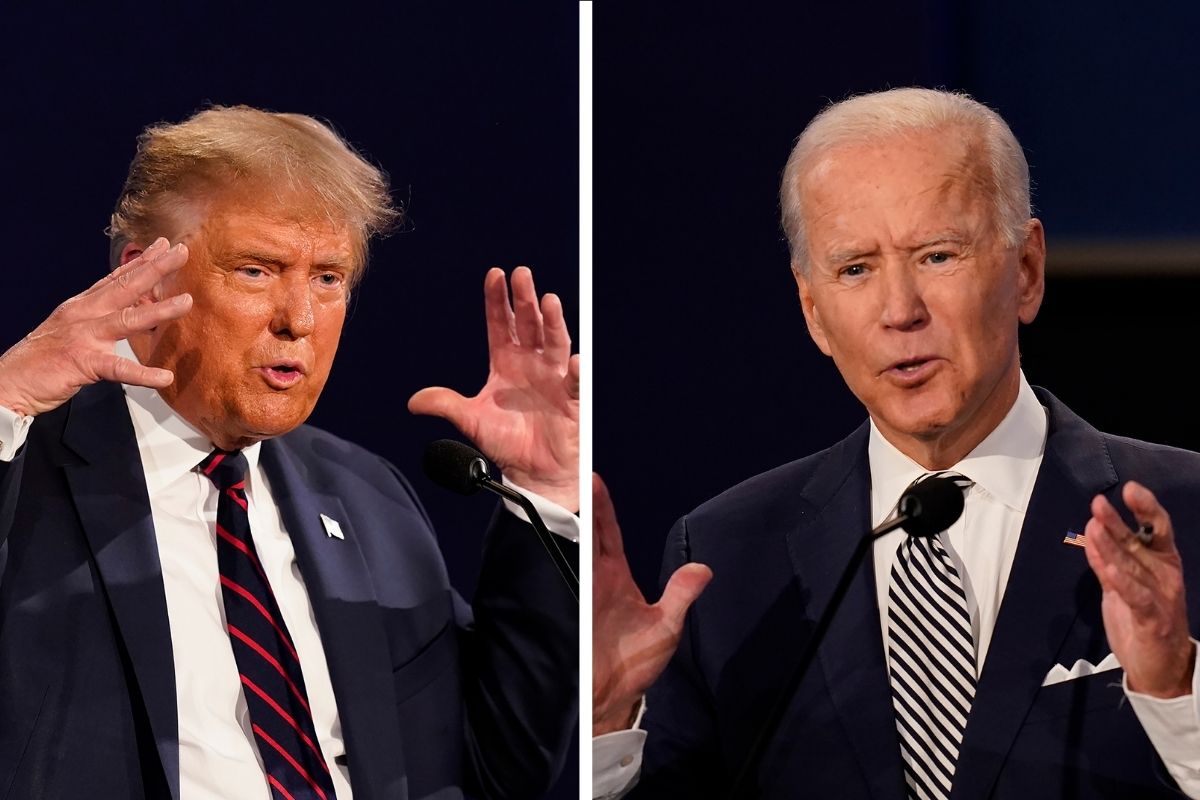 The first of three highly anticipated 2020 presidential debates occurred on Tuesday night as former Vice President Joe Biden and current President Donald Trump faced off in Cleveland. The Trump-Biden debate hit several topics including each candidate’s individual records, the economy, the Supreme Court, race, violence, and the integrity of the 2020 election.

Several social media users were disappointed with the debate, dubbing it the worst presidential debate in history. Americans watched in awe as president Donald Trump bulldozed his way through the debate, interrupting Joe Biden and Fox News moderator Chris Wallace for the majority of the debate. He also signed ignored substantive questions and Biden’s policy argument, swinging at Biden’s family.

Others argued over the lack of respect from Biden, as he repeatedly mocked the President and called him a “racist,” “clown,” and “the worst president America has ever had.” He went on to criticize Trump’s handling of the COVID-19 pandemic in the United States, and how he failed to produce a health care plan and a lack of response to protests of racial injustice.

Here are four major takeaways from the first presidential debate.

More than 200,000 Americans have died from COVID-19, and coronavirus cases are spiking again in several parts of the country. As Trump spoke about COVID-19, he seemed to leave the topic behind when he tried to defend himself on the way he managed the pandemic, by insulting the presidential nominee. Biden stated, “He panicked or just looked at the stock market, one of the two, because guess what? A lot of people died and a lot more are going to die unless he gets a lot smarter a lot quicker.”

To which President Trump responded, ?Did you use the word ‘smart?’ You graduated either the lowest or almost the lowest in your class. Don’t ever use the word ‘smart’ with me.” The president also noted he disagreed with experts on a vaccine timeline, saying it would be available soon. Trump also openly mocked Biden for wearing a face mask and instead of a hard defense, claimed that Biden would have done much worse. Despite Biden’s numerous attempts to bring back the topic of the pandemic, the debate seemed to devolve into an argument that did not center on the global pandemic.

Asked by debate moderator Chris Wallace to condemn white supremacists and militia groups, Pres. Trump replies, "Sure, I'm willing to do that."
"Then do it, sir," Wallace says. https://t.co/5Bl4Ob3O2t #Debates2020 pic.twitter.com/K4nG4VlQxu

Former Vice President Joe Biden repeatedly called President Donald Trump racist. The democratic nominee stated, “This is a President who has used everything as a dog whistle to try to generate racist hatred, racist division.” During that portion of the night which focused on race relations, violence, policing, and protest, Trump attempted to pin Biden to the destructive and violent elements of the protests over that police killing of George Floyd in Minnesota, Breonna Taylor in Kentucky, and others, even as Biden condemned violence. Trump, claimed that America’s suburbs, would be ?gone? if Biden is elected.

Biden quickly shot back at the president adding that this was not 1950, and Trump’s handling of the coronavirus pandemic and the climate have damaged the suburbs. The section ended with President Donald Trump refusing to condemn White supremacy when he was asked to do so by the democratic presidential candidate and moderator Chris Wallace. The president spoke to the white supremacist militia group Proud Boys, stating, “Stand back and stand by.”CNN political commentator Van Jones spoke about trumps message, stating, “The commander in chief refused to condemn White supremacy on the global stage in front of my children, in front of everybody’s families, and he was given the opportunity multiple times to condemn White supremacy and he gave a wink and a nod to a racist, Nazi, murderous organization. That’s the only thing that happened tonight. That’s what happened tonight.”

President Trump interrupted Joe Biden during their debate when Biden was talking about his late son’s military career, shifting the subject to the business ties of Biden’s other son https://t.co/o2s21y0yNX pic.twitter.com/QhA4ZLmcaV

Minutes into the debate President Trump raised an issue that touched Joe Biden on a personal level. Trump and his allies have repeatedly made false claims alleging that the former vice president and his son, Hunter Biden acted corruptly in Ukraine. Biden denounced the claims, looking straight to the camera setting the record state, stating, “This is not about my family or his family, this is about your family — the American people. He doesn’t want to talk about what you need.”

As Trump kept returning to the issue, Biden sought to criticize Trump for calling US war dead ?losers,? bringing up his late son, Beau who served in Iraq and passed away from brain cancer in 2015. Instead of rebutting, Trump then sought to return the debate to Hunter Biden, saying he didn?t know Beau Biden on a personal level. Trump then rose past issues with drug addiction, pinning Hunter under the bus. The democrat quickly looked at the camera to address the issue, saying, ?My son, like a lot of people, like a lot of people you know at home, had a drug problem. He’s overtaken it. He’s fixed it. He’s worked on it. And I’m proud of him.”

“He has no idea what he’s talking about,” Biden says after Trump makes false claims about mail in voting.

“Once the winner is declared after all the ballots are counted … that will be the end of it … and if it’s not me, I’ll support the outcome.” https://t.co/1FSfyX9lEP pic.twitter.com/sAX0siBSDj

Towards the end of the debate, Wallace decided to turn the debate to election integrity. He asked how confident Americans should be that the general election will be fair. Biden quickly urged citizens to vote, whether it be by mail or in person. He cited against Trump administration officials, ensuring that there is ?no chance at all that mail-in ballots are a source of manipulation or cheating.? His statement seemed to aim at Trump after the president has repeatedly warned that an expected flood of mail-in ballots due to COVID-19 will lead to ?massive fraud? in the 2020 election. Last week, Trump had refused to commit to a ?peaceful transfer? of power if he did lose to Biden in the election.

Speaking of the Republican candidate, Biden noted, ?He?s trying to scare people into thinking that it?s not going to be legitimate. Show up and vote. You will determine the outcome of this election.? In response, Trump continued to doubt the presidential election outcome, saying it was not going to end well, noting, ?This is going to be a fraud like you?ve never seen.? He also spoke about the Obama administration, recalling how they ?spied on his Trump campaign.? He noted, ?They came after me trying to do a coup,? Trump said. ?We?ve caught ?em all. President Obama, he knew about it too. So don?t tell me about a free transition.?