Bombs went off in Somalia, killing hundreds of people — the early images are horrifying 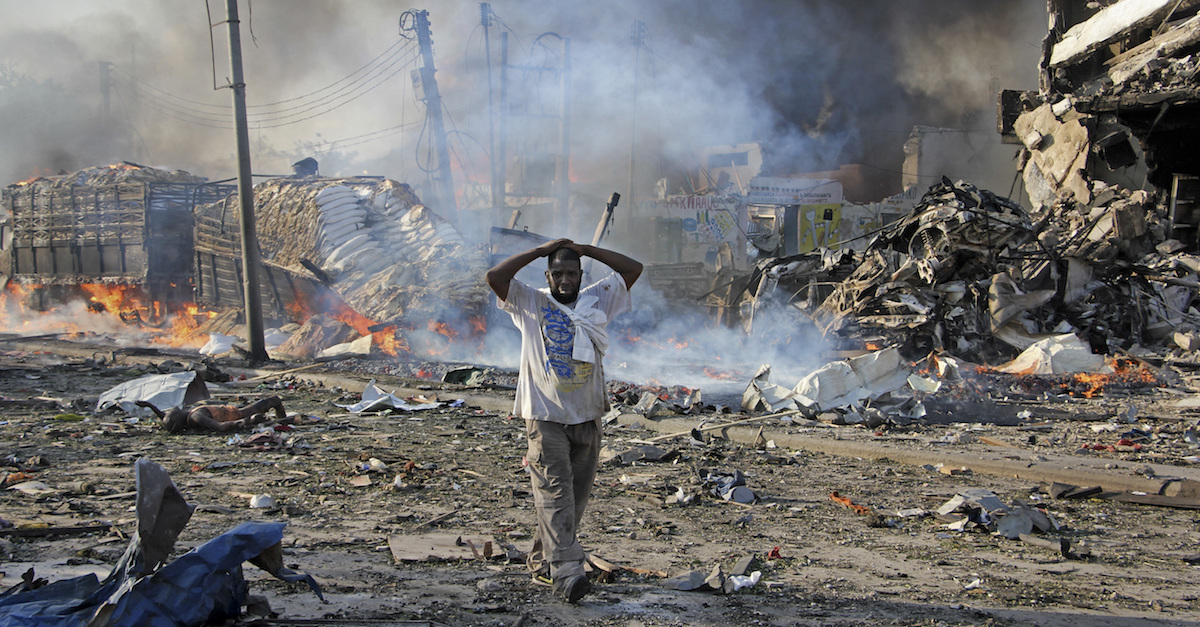 AP Photo/Farah Abdi Warsameh
A Somali gestures as he walks past a dead body, left, and destroyed buildings at the scene of a blast in the capital Mogadishu, Somalia Saturday, Oct. 14, 2017. A huge explosion from a truck bomb has killed at least 20 people in Somalia's capital, police said Saturday, as shaken residents called it the most powerful blast they'd heard in years. (AP Photo/Farah Abdi Warsameh)

It is a dire situation on the ground in Mogadishu, Somalia, right now, as at least 231 people were killed and hundreds more injured in a double car bomb blast targeting a crowd of people.

It appears that the death toll is likely to rise. One nurse on there said that that “nearly all of the wounded,” of whom there are more than 200, “have serious wounds.”

Nurse Samir Abdi also said that she witnessed “unspeakable horrors,” the Associated Press reported. The smell of blood was also described as “strong.”

Angry protesters gathered near the scene of the attack and Somalia’s government blamed the al-Qaida-linked al-Shabab extremist group for the “national disaster.”

The United States condemned the bombing, saying “such cowardly attacks reinvigorate the commitment of the United States to assist our Somali and African Union partners to combat the scourge of terrorism.”

But the U.S. Africa Command said U.S. forces had not been asked to provide aid. A spokesman told The Associated Press that first responders and local enforcement would handle the response and “the U.S. would offer assistance if and when a request was made.”

The first of two explosions hit the Safari Hotel in the heart of the city, while the second blast occurred in the Madina district, CNN reported.

Special representative of the United Nations secretary-general for Somalia Michael Keating said the attacks targeted a “densely populated area” and killed “an unprecedented number of civilians.”

“The perpetrators struck a densely populated neighborhood of Mogadishu. They have killed an unprecedented number of civilians. It is a revolting attack both in terms of its intent and impact,” he said.

RELATED: A Jihadi bride named the “White Widow” was killed in a drone strike

The Guardian is reporting that the number of people killed or injured is at least 500.

Early images of the carnage in Somalia are horrific.

A bomb killed 300+ people in Somalia and no one seems to care pic.twitter.com/UWAVxAWY9y

The death toll from an explosion in Somalia rises to 189 https://t.co/xORtE228zo pic.twitter.com/Vp8dbizFUd

No group at the time of this writing has claimed responsibility for the attack.