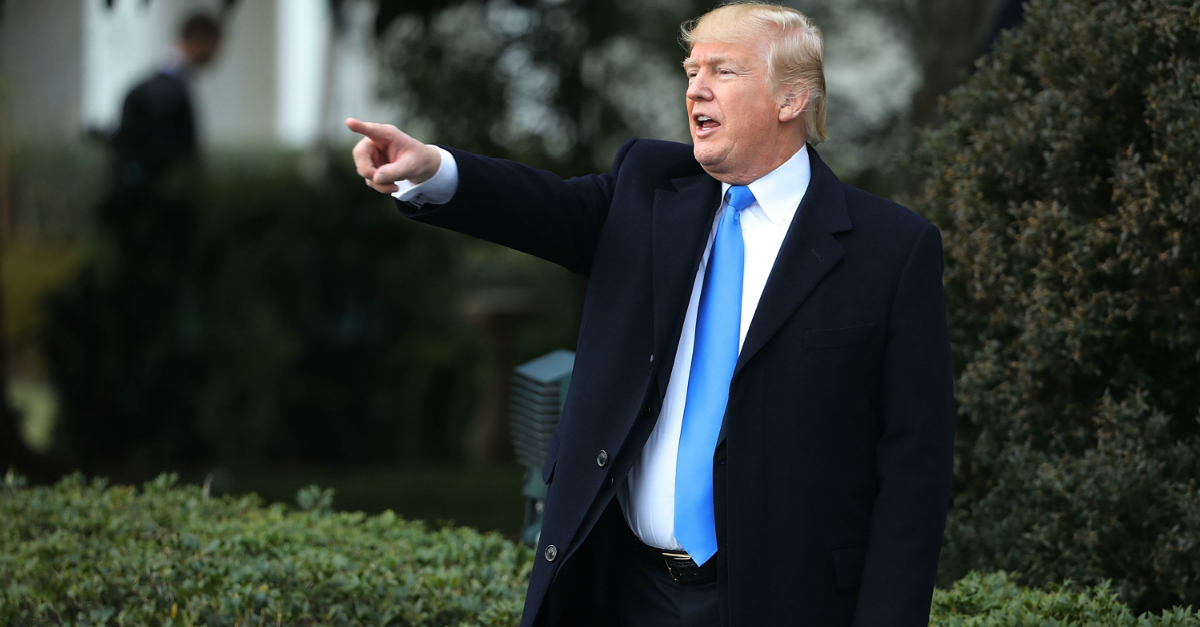 (Photo by Chip Somodevilla/Getty Images)
WASHINGTON, DC - DECEMBER 20: U.S. President Donald Trump points to guests at the conclusion of an event to celebrate Congress passing the Tax Cuts and Jobs Act on the South Lawn of the White House December 20, 2017 in Washington, DC. The tax bill is the first major legislative victory for the GOP-controlled Congress and Trump since he took office almost one year ago. (Photo by Chip Somodevilla/Getty Images)

A federal judge in California dealt a blow to the Trump administration’s attempt to end Deferred Action for Childhood Arrivals (DACA) Tuesday by temporarily blocking their ability to do so.

In his ruling, Judge William Alsup said that DACA must stay in place until litigation over the program is complete. He also said that the Department of Homeland Security’s “decision to rescind DACA was based on a flawed legal premise.”

The judge’s ruling will allow recipients who didn’t renew by last year’s deadline to submit renewal applications, but no new applications will be allowed to be submitted.

“Dreamers’ lives were thrown into chaos when the Trump Administration tried to terminate the DACA program without obeying the law,” said California Attorney General Xavier Becerra, according to The Hill. “Today’s ruling is a huge step in the right direction.”

“America is and has been home to Dreamers who courageously came forward, applied for DACA and did everything the federal government asked of them,” Becerra continued. “They followed DACA’s rules, they succeeded in school, at work and in business, and they have contributed in building a better America. We will fight at every turn for their rights and opportunities so they may continue to contribute to America.”

The Trump administration announced in September that they were ending the program; however, earlier on Tuesday, during a meeting with Republicans and Democrats to discuss immigration issues, Trump appeared willing to negotiate a pathway to citizenship for millions of undocumented immigrants – a move that stunned both Democrats and Republicans.

“My head is spinning with all the things that were said by the president and others in that room in the course of an hour and a half,” Senator Richard Durbin, D-Ill., said, according to The New York Times.

During the meeting, President Trump also appeared to support Senator Dianne Feinstein’s, D-Calif., call for a clean DACA bill, which would push off dealing with issues like border security until later.

In a tweet Tuesday evening, though, he did seem to harden his resolve on the border wall, saying that a southern border wall must be part of any “DACA approval.”