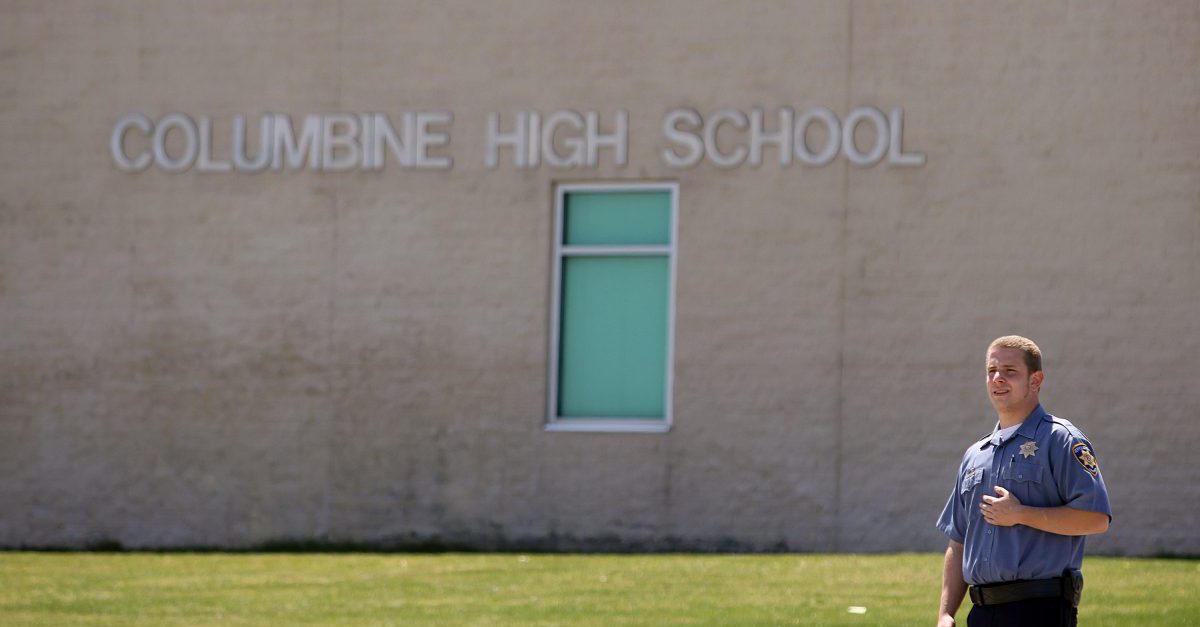 Marc Piscotty/Getty Images
LITTLETON, CO - APRIL 20: A Jefferson County Schools security officer stands guard at the entrance to Columbine High School on the ten-year anniversary of the Columbine High School shootings April 20, 2009 in Littleton, Colorado. Columbine was the site of the then deadliest school shooting in modern United States history when, on April 20, 1999, Eric Harris and Dylan Klebold killed 12 students and one teacher, and wounded 23 others, before taking their own lives. (Photo by Marc Piscotty/Getty Images)

With the massacre of 17 staff and students at Marjory Stoneman Douglas High School still fresh in the minds of many, a Colorado state lawmaker — and survivor of the Columbine school shooting that killed 12 in 1999 — is pushing to eradicate “gun-free zones” in schools, according to the Washington Times, allowing concealed-carry permit holders to carry on school grounds and in buildings.

Colorado House Minority Leader Patrick Neville was fifteen years old and a sophomore at Columbine High School when the shooting started one day in 1999. Neville believes that armed teachers and school staff could have curbed the bloodshed at Columbine, telling NPR: “I truly believe that had some of them had the legal authority to be armed, more of my friends might be with me today.”

So he’s introduced a bill to allow concealed carry and eliminate “gun-free zones” at high schools — a bill that he has introduced and watched die every year since 2014. This year’s bill was introduced last month; its hearing in Colorado’s State House, which has a Democratic majority, is Tuesday.

Current Colorado state law requires people with concealed-carry permits to keep their weapons locked in their vehicles when on school property. An armed school resource officer was on-campus at Marjory Stoneman Douglas High School on the day of the shooting, but “never encountered” shooter Nikolas Cruz.

In a statement reported by the Washington Times, Rep. Neville said: “This act would allow every law-abiding citizens who holds a concealed carry permit, issued from their chief law-enforcement officer, the right to carry concealed in order to defend themselves and most importantly our children from the worst-case scenarios.”

“The one common theme with mass shootings,” says Neville, is that “they occur in gun-free zones.” Neville did not mention other possible common themes, like the AR-15 rifle, present in 7 of the 10 deadliest school shootings in the past ten years.

A rural Colorado school district, Hanover, voted in 2017 to allow teachers to carry guns in the classroom once they earned extra certification.